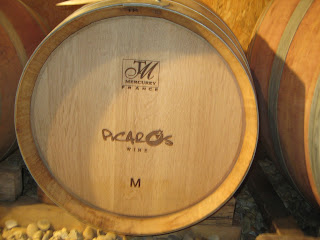 One of the excitements of ten days in the Languedoc  over New Year was the discovery of a new wine estate in my own adopted village.     Wine quality in Roujan is definitely beginning to look up.   As mentioned in a previous post, a wine from Domaine Picaro’s was amongst the Pays d’Oc Collection for 2015.  So I had to go and visit and see for myself.

Pierre and Caroline have their cellar in the chemin de Pézenas.  Pierre Rouillé comes from a long-established Roujan family; his grandfather had the traditional Languedoc cellar with large foudres, while his father preferred to put his vines into the Roujan coop.  Pierre studied oenology at Dijon and then together he and Caroline went to work in Chile, in the Maule valley for three years.  When they returned to France, they wanted to create something from the family vines, and their first cuvée was born, Amano, a blend of Syrah and Grenache, handmade, as the name implies, with meticulous attention to detail.  They had a tiny basket press, which has now been upgraded to the smallest of pneumatic presses, and they destalk all the bunches by hand and then put the wine into feuillettes, which are even smaller than barriques and more commonly found in Chablis than in the Languedoc.  They do have a larger demi-muid as well. 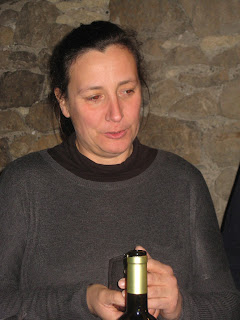 So of their ten hectares, seven are in the village coop, and three produce two wines, in tiny quantities.   They are gradually replanting and renovating their vineyards, and apart from Grenache Noir, Syrah and Carignan they also have some more international varieties, Chardonnay, Cabernet Sauvignon, Viognier, as well as Muscat à petits grains and an old vineyard of Grenache Blanc.   They also have some land they could clear and replant, and their next project is a white wine.

2014 Plurielles,  (11.00€)  which featured in the Pays d’Oc Collection, tasted just as good in their cellar. This was their first vintage.  It is a blend of 50% Syrah, with 25% each of Grenache Noir and Carignan, with some traditional vinification and some carbonic maceration.   They wanted some accessible fruit, and that is just what they have achieved, a wine with very appealing red fruit, with acidity as well as tannin and an elegant balance.  The Carignan vines are now 40 years old, and beginning to become interesting, as Caroline observed. 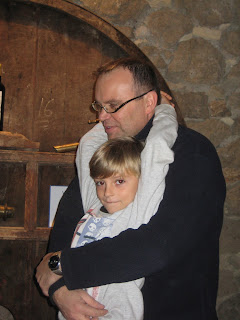 2012 Amano (25.00€) is a more serious proposition, with 50 % Grenache Noir and 50% Syrah, aged in wood, some new and some older, for ten months.  Both nose and palate are quite solid and rounded, but there is ripe fruit, with a touch of vanilla and some well integrated oak balancing the fruit, and again and elegant freshness on the finish.  Caroline explained how they work on a very long gentle extraction, with a four weeks maceration, as opposed to two for the Plurielles.  Destemming by hand also makes for very gentle handling, and gives more richness and concentration of flavour.     Undoubtedly this will benefit from some bottle age.    The quantities are tiny, just 1500 bottles of Amano and 3500 of les Plurielles. 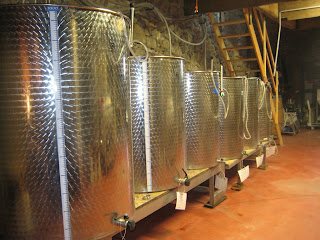 And we finished with some 2015 vat samples:  a sturdy Grenache wit h ripe red fruit and tannins; a ripe perfumed Carignan  with some cherry fruit, and a firm spicy Syrah.  It all promises well for the future. 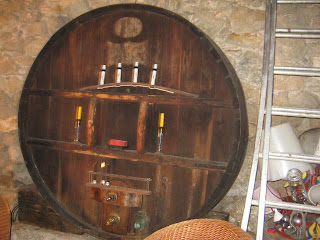