A Languedoc moment at the Château de Pennautier 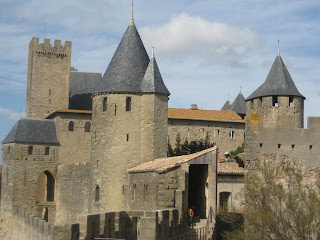 Every year the CIVL, or to give it its full name, the Comité Interprofessionnel des Vins du Languedoc, organises a week of tasting and visits for the appellations of the Languedoc, with the main aim to show off the new vintage.  This year everything took place in or around Carcassonne, so I went over for a couple of events.  In the afternoon, I concentrated on La Clape, and in particular on some lovely whites.   I am not going to bore you with a whole lot of tasting notes,  but just highlight a few names, such Mas de Soleilla, Château d’Anglès, Domaine Pech Redon, Mire l’Etang, Sarrat de Goundry.  I love the fresh saline notes of white La Clape, which all of these wines showed.  There were some fine reds too, Mas Soleilla les Bartelles, Domaine Ricardelle, Château d’Anglès, both the Grand Vin and the Cuvée Classique, among others.

And the following morning I checked out some Fitou, which for some reason is an appellation that I don’t often get to taste.  Château de Montmal from Mont Tauch was showing well, as were wines from Domaine Bertrand Bergé, but they did seem to be quite a mixed bag, with some rather drying leathery fruit in some cases, or heavy-handed use of oak.  The best were fresh and peppery with spicy flavours.  There was scope for an in-depth look at Corbières, but by then my taste buds were flagging.  I did however, taste a couple of Minervois, 2014 les Fontanilles from Anne Gros, which was elegantly and spicy, as befits a Burgundian winemaker;  2014 Clos du Gravillas Rendez-Vous sur la Lune was showing well with some fresh peppery fruit, and 2010 C de Centeilles from Picpoul Noir, Ribeyrenc Noir and Oeillade was rounded with some fresh firm flavours, and an intriguing example of an attempt to revive long forgotten grape varieties.  . 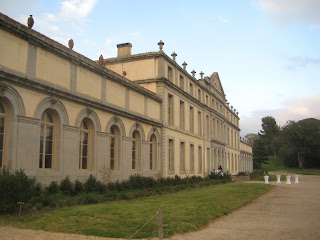 But the highlight of the event was undoubtedly the evening at Château Pennautier, a 17th century château that is the property of the de Lorgeril family, in the appellation of Cabardès.   First we had a quick look at the streamlined modern cellar and then the aperitif was served on the terrace so that we could admire the elegant architecture, and fine proportions of the château, and enjoy various rosés from Cabardès.   This was not the moment for detailed tasting notes, and my notebook failed me. 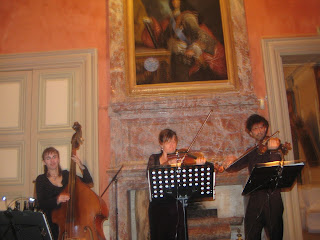 And then we went inside for a small concert before dinner.  This really was magical, with a string trio, Trio Borsalino, playing Vivaldi’s Spring from the Four Seasons, and then a selection of film music and other tunes.  The château was the perfect setting.  A delicious dinner cooked by Jean-Marc Boyer from the restaurant, Puits du Trésor, was served with more Cabardès.  Cabardès is where the Mediterranean meets the grape varieties of Bordeaux and there is an immediate contrast with the wines of neighbouring Minervois.  My notes were pretty cursory, but highlights included wines from Domaine de Cazaban with Demoiselle Claire, a blend of Syrah and Merlot, with some spice and tannin.   2013 Château Pennautier, Terres d’Altitude was elegant with fresh fruit and balancing tannins.   I found I favoured fruit rather than oaky tannins.  But the real high point of the evening was undoubtedly the music in elegant surroundings, making a memorable Languedoc moment. 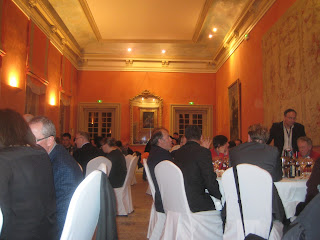