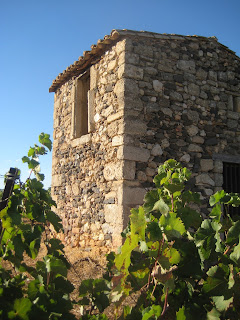 It had been a while since my last visit to Domaine de Nizas in a tiny hamlet between the villages of Caux and Nizas, so it was high time for an update.  This estate belongs to two Californians, John Goelet and Bernard Portet, of Clos du Val in the Napa Valley.  Nathalie Arnaud-Bernard has been the winemaker since 2011.  These days they have 40 hectares of vines on various different soils, basalt, clay and limestone, and galets roulées, and their range of wines has been rationalised into three levels, namely Le Mazet, Mosaique and Expression.

2015 Le Mazet de Sallèles, Pays d’Oc - 6.00 euros
A blend of 80% Sauvignon Blanc and 20% Viognier which are blended in December for bottling in January.  Light golden colour; quite a rounded peachy nose, with some pithy notes from the Sauvignon.  The nose was more Sauvignon and the palate more Viognier, with some peachy fruit and some texture, with some acidity on the finish.  No malolactic fermentation, but some élevage  on lees to fill out the palate.

Mosaïque Blanc:  2014 Les Terres Noires, Languedoc  - 9.00 euros
46% Roussanne - 36% Vermentino and 18% Viognier.  The black stones refer to the basalt soil and there is also some clay and limestone, and some galets.  The Roussanne component is fermented in oak and aged in barrel for nine months.  Light golden.  White flowers and peachy notes on the nose, and also a touch of fennel, of which there is plenty in and around the vineyard.  Quite rounded with some weight and depth.

Mosaique Rosé : 2014 Les Pierres Blanches, Languedoc   7.00 euros
A blend of 40% Syrah, 40% Grenache and 20% Mourvèdre.  The grapes may be either saigné or pressed.  A light pink colour.  Fresh dry nose, with dry raspberry fruit. Quite a crisp palate, fresh and firm with a dry finish.

Le Mazet Rouge, a blend of Cabernet Sauvignon and Syrah, features in the range, but there was none available for tasting as it was all sold out.   So we went onto:

Mosaique Rouge: 2014 Les Galets Dorés, AC Languedoc - 9.00 euros
Grenache Noir 60%, 25% Carignan and 15% Syrah.  They use their younger vines for this, with an average age of 7 years.  Medium young colour; quite spicy on the nose with some ripe, rounded fruit on the palate, with a firm tannic streak.

Expression:  2013 Le Clos, Languedoc - 13.00 euros
60% Syrah, 35% Mourvèdre and 5% Grenache Noir. The average age of these vines is 20 years.  The Syrah spends 12 - 18 months in wood, of which 25% is new.  Deep young colour.  Young rounded spice on the nose.  Supple rounded fruit on the palate with a streak of tannin.  The oak is nicely integrated.  Youthful with ageing potential.  The cuvaison lasts at least three weeks.

Expression:  2013 La Réserve, Pézenas  - 17.00 euros
50% Mourvèdre, 25% Grenache Noir and 25% Carignan.  Their first Pézenas cuvée was made in 2008, as the top of their range, and just 3000 bottles.  The whole cuvée is aged in wood for 18 months, of which half is new.  And the blend is done after élevage.  Medium young colour.  Ripe black fruit on the nose, with black cherries and a ripe palate.  Quite intense, with some smoky fruit and firm tannins.

And then by way of comparison, and to illustrate ageing potential 2009 Le Clos
50% Mourvèdre, 25% Grenache Noir and 25% Carignan again.  A little development of colour.  Quite dry leathery nosed on the palate, showing notes of maturity.  Quite a rounded palate with some spice.  Quite solid and structured.  They see Le Clos as the historic cuvée of the estate, as it has been made since 1998.

And I was please to hear that they are planning start producing their Carignan cuvée again, from 60 year old vines; the Carignan had been used for their Pézenas cuvée over the last few years.  And then we had time for a quick look at the vineyards, with a view of the church tower of Caux in the distance and a rather handsome mazet in the middle of the vines.   The harvest was in full swing; the rosé had been picked that morning.  And they seemed pretty pleased with how the vintage was going, despite some complicated climatic conditions, heat, drought and then rain.
Email Post

StormPartner said…
Interesting. We visited Domaine de Nizas - I think it was ten years ago. Do you have some information about another winemaker in the same district - Domaine La Garance?
http://stormpartner.blogspot.se/
26 September 2016 at 18:33

Bob Rossi said…
Sounds like they're making some very interesting wines. The last Nizas wine I've seen here in the northeast US is the 2006 Coteaux de Languedoc red, which I have one bottle of in my cellar. A friend of mine is a long-time friend of John Goelet, and when my wife and I stayed in that area about 15 years ago, my friend contacted him to ask him to let someone at the winery know we planned to visit. Unfortunately, I didn't know what day we'd be going, and so we just headed that direction one day to try and find the place. But we never did; we just drove through a little hamlet or village where I thought it would be, but there was nothing there. Next time I'll ask you for directions. I don't know why their wines are no longer available here. I do remember their 2001 being outstanding.
27 September 2016 at 02:29

Rosemary George MW said…
I haven't visited Garance for ages, not since starting this blog. his wines used to be quite powerful, rich and pretty alcoholic, and I assume they still are - but don't know for sure. I'm probably due for an update there too.