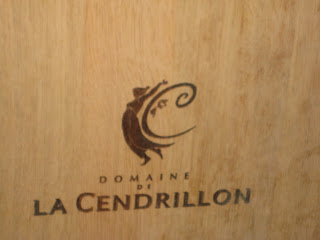 This estate came to my notice following its success in this year’s Decanter World Wine Awards, with a gold medal for their Corbières Cuvée No. 1.  Robert Joyeux explained how it has been in his family since 1750.  He is the 7th generation; his father was not particularly interested in the vineyards  and only ever sold his wine en vrac, whereas Robert realised that he really wanted to make wine, indeed great wine. Robert initially worked in management, so he knows how to organise things.  He began working on the estate in 1993 and his father ‘gave him the keys’ soon afterwards. After a lot of work improving the vineyards and modernising the cellar, he bottled his  first vintage, the 2008.

The estate totals 50 hectares, of which 40 are vineyards, planted mainly with red varieties, Grenache Noir, Mourvèdre, Syrah, and a little Carignan, Cinsaut, Marselan and Merlot.  There are just two and a half hectares of white, but Robert is planning  more, with Grenache Blanc and Gris, Marsanne, Roussanne, and more unusually Verdejo and Albariño.  His first white vintage was 2014.  Robert enthused about the region, the variety of soils, with an old river bed and several terraces, with quartz and limestone.  The Languedoc is a region of assemblage, of blending with variations in terroir and grape variety.   His winemaker, Julien, is encourage to do  lots of micro-vinifications, identifying the characteristics of the various different plots.   The average of the vines is between 20 and 30 years old; about fifteen hectares were replanted over the last ten years, and white varieties, Albariño, Petit Manseng and Verdejo were added about seven or eight years ago.  Most of their grapes are picked by hand, ands they have an implement that measures the flavour development of the grapes, from fresh fruit, neutral ripe and overripe. Great attention is paid to sorting the grapes, first mechanically to remove bits of rubbish, leaves, stones etc. and then by hand to remove any imperfect grapes. 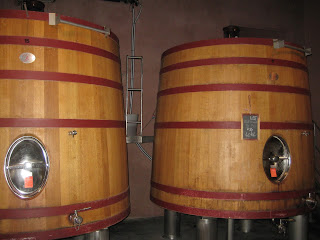 As you might expect the cellar is modern and streamlined.  There are lots of stainless steel vats of varying sizes, as well as some wooden tronconique vats.   And there are also traditional cement vats, that are lined, and equipped for temperature control.  They favour microbullage to soften the tannins, and facilitate the élevage.  You sense that there is a lot of very detailed work and not least, observation.  And in the barrel cellar they favour the Austrian cooper Stockinger as well as the local one, Boutes. 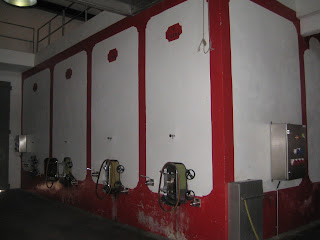 And then we settled down to taste:

2015 Nuance, Vin de France - 12.00€
An original blend of all their white varieties, namely Petit Manseng, Albariño, Verdejo, Grenache Gris and Blanc, Marsanne and Roussanne.  One third of the blend is fermented and aged in demi-muids,  mainly the Petit Manseng and Grenache Blanc component.  The nose is exotic and intriguing, with honey, pineapple and citrus notes.   The palate has fresh acidity, and is still tight knit, with some saline mineral notes.  It should evolve beautifully; I’d give it five years, but it is already a lovely glass of wine.

2015 Minuit, Corbières Rosé - 9.00€
A blend of Grenache, Mourvèdre and Cinsaut that are pressed straightaway.  The colour is delicate, and so is the nose, and the palate is rounded with a fresh finish balanced with some body or matière. 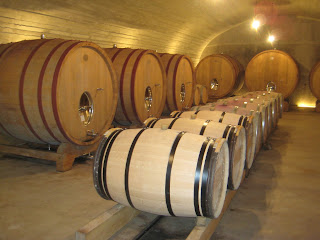 2013 Corbières Cuvée Classique  - 13.00€
A blend of 40% Syrah and 30% each of Grenache and Carignan, with quite a long élevage in vat rather than barrel.  They do a first blend after the malo-lactic fermentation and then adjust the blend later in the year.  Medium colour, with some dry leathery spice on the nose and palate.  Integrated tannins, rounded with medium weight.  Julien observed that 2013 was quite a light vintage, and quite supple.  This is their main line, accounting for about 50,000 bottles.

2012 Corbières Cuvée Classique
From a riper year.  There are firm tannins, but the wine is fleshier and riper.  An intriguing difference. 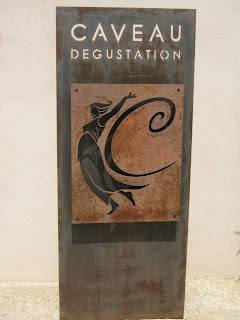 2012 Corbières Inédite - 20.00€
The blend is 50% Syrah, with 40% Grenache and just 10% Mourvèdre and some of the wine is fermented in the large tronconique vats.  The grapes comes comes from slightly higher vineyards and 50% of the blend spends 18 months in foudres.  Quite a deep young colour, with some firm peppery fruit.  A tight knit structured palate, with some weight and some firm peppery youthful fruit.  The oak is well integrated.  It promises well.

2011 Corbières Inédite
Another fascinating comparison, with a slightly different blend, predominantly Grenache and Syrah with 5% each of Carignan and Mourvèdre.  Good colour.  A fresh peppery nose, with rounded ripe cherry fruit.  Lots of nuances develop in the glass as you taste.  Some lovely fruit and an elegant palate. This is the first vintage that they used foudres and they are pleased with the results.  Robert talked about their new investments in 2015; with Julien they are considering a development in style, making for fresher wines with less extraction and tannins.  It all hinges on better work in the vineyards. 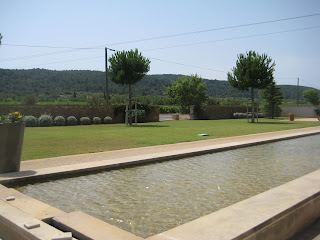 2012 Corbières, No 1 - 40.00€
This is the wine that won a gold medal from Decanter.  And I could quite see why.  It is a blend of 60% Mourvèdre with some Grenache and Syrah from higher vineyards. and all vinified in tronconique vats and blended after a 24 months élevage.  From 2013 the ageing time has increased to three years, and this particular blend is only made in the best years.  2008 was the first vintage, 2010 and 2011 followed and 2014 and 2015  are in the pipeline.

Medium colour.  Quite a firm nose, with dry red fruit and spice and on the palate the wine is rounded and elegant.  The oak is integrated and balanced by some lovely fruit.  Again there are lots of nuances of flavour; the tannins are supple with some of the leathery notes of Corbières, and a restrained finish.

2011 Corbières, No 1
This is from a hotter year, with a more concentrated palate.  The Mourvèdre ripens later than the other grapes.   The palate is riper and fleshier with furrier tannins, making a rounded concentrated mouthful of flavour.  The wine is still very young with a long life ahead of it.

So in conclusion, a lovely discovery with some delicious wines.


And then we adjourned to a local restaurant, La Table du Château in the neighbouring village of Bizanet.  I can warmly recommend it. 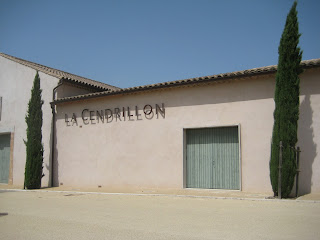 Bob Rossi said…
Once again a wonderful-sounding winery whose wines I probably can't find here in the northeast US. When I first visited the Corbieres region, about 15-20 years ago, we found one outstanding winery, one terrible wine, and several fair to decent wineries. Now, however, it seems there are loads of very good Corbeires producers, some of whose wines are even available here. And by the way, thanks you for continuing to review wines with descriptions and not point scores.
3 September 2016 at 16:39

Rosemary George MW said…
My curiosity is aroused! who was the outstanding winery? and are you prepared to share the terrible wine?! And thank you for your support on descriptions. I can't cope with the 100 points system that everyone seems to want these days.
7 September 2016 at 18:26

Bob Rossi said…
Rosemary, the winery was Domaine Roque-Sestière in Luc-sur-Orbieu. The owners were so welcoming despite the fact that they had just had a plumbing accident that flooded their guest house. They told us that they used to have a US importer, but he stiffed them, and they were gun shy about trying again. I haven't found their wine in the US, but I believe it may be in Canada. But, of course, you don't have to worry about such things.
As to the terrible wine, I can't remember. I just remember that we arrived in the little village we were staying (Conilhac-Corbieres) late in the day, and there was only one open small grocery shop. I think it had just one red Corbieres, so I bought it.
7 September 2016 at 18:48

Rosemary George MW said…
I know the name of Roque Sestière but have never visited - had better add to the never-ending list!! And the bad wine is best forgotten....
8 September 2016 at 10:17

Rosemary George MW said…
I saw the export guy for Domaine de la Cendrillon in London yesterday and he would like to say that his wines are imported into the US by Frederick Wildman and distributed in New York State and New Jersey. So do seek them out.
21 October 2016 at 09:56

Bob Rossi said…
Thank you very much for the info Rosemary. At the very least I can look for them if I'm in NY, and since many of Wildman's wines are distributed here in Maine, maybe they'll make it here at some point.
21 October 2016 at 19:33