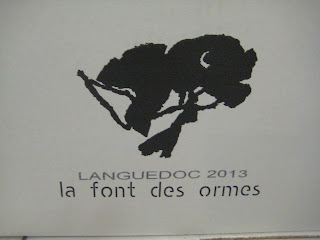 La Font des Ormes is off the road between Nizas and Caux; I have driven past it many times, but one day last month,  thanks to a good friend’s recommendation, I turned up the drive to meet Guy Cazalis de Fondouce.   Guy is one of the many people in the Languedoc who have come to wine after a successful career in another field, in his case child psychiatry, in both France and La Réunion.  His family comes from the Languedoc, with a family estate near Villeveyrac, but he wanted land of his own, and bought La Font des Ormes in 2002, since when he has gradually bought more vineyards, replanting some and retaining old vines of Carignan and Terret.  He began working with the soil specialist, Claude Bourguignon early on and Claude advised on the purchase of a particularly fine plot of old Carignan on basalt. In fact most of Guy’s appellation vineyards are on basalt for there is an extinct volcano nearby.  As well as Carignan, Guy has Grenache, Syrah and Mourvèdre, and is replanting some Cinsaut, and there is Merlot and Marselan  for vin de pays, grown in sandier soil, as well as Terret, for a first white wine with this vintage.   There was a lot of work to do at the beginning - the grapes were fit for the coop, but not much more - these days Guy makes a range of three red wines, and has a flexible arrangement with the coop in Adissan who will take any grapes, such as those from young vines, that he does not want.   The property now comprises 20 hectares, with 17 hectares of vineyards and 14 currently in production.  The first serious vintage that he put in bottle was 2011. 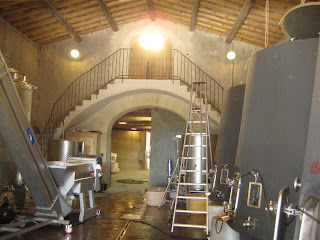 The cellar is a splendid old Languedoc barn, dating from 18th century.  Originally there were several 200 hectolitre concrete vats - these days one functions as a small office - and the others have been replaced by stainless steel and smaller tronconique cement vats.  They are a handsome dark grey.  And three enormous stone vats have been knocked into one and now function as a barrel cellar - it is well insulated.    We adjourned to a large room that had once been the grain store under the roof of the barn to taste: 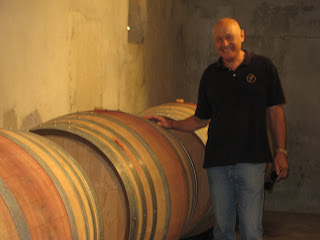 2014 Pays de Caux - 8.00 €
A blend of 45% Marselan  and 55% Grenache.  Quite deep colour. A ripe nose of red fruit, with a touch of spice and a lightly smoky note.  Quite a fresh palate with easy fruit and a streak of supple tannin.   Marselan above all makes for easy drinking; Guy admitted that he was surprised by its quality

2013 Languedoc - 14.00€
45% Grenache, with 25% Mourvèdre, 15% Syrah and 15% Carignan.  The wine has spent a year in vat, followed by a year in demi-muids and then some ageing in bottle.  The blending is a gentle process, an initial pre-assemblage six months after the harvest and the the final blending before the wine is put in to barrel.  Good colour.  Quite a firm, tight peppery nose; and on the palate quite elegant fruit balanced with elegant tannins.  Guy asserted that basalt gives elegance to a wine; and elegance is what he is looking for in his wine.  The finish was fresh and lively.  For his wine making, Guy is advised by Jean Natoli and he favours short extractions, with quick remontages and above all does not want what he called ‘violent’ tannins.   He had first bought barriques, but has moved onto demi-muids, for that reason.

2011 Languedoc - 12.00€
The first proper vintage, with a slightly different blend, but still dominant Grenache Noir with 30% Mourvèdre, 15% Syrah and 10% Carignan.  Quite a deep colour, with the nose beginning develop some notes of maturity, and a slightly meaty note.  Some rounded fruit on the palate, with more weight and opulence than the 2013, but still with the same fresh finish on the palate.

2014 Pézenas - 20.00€.
This is the first vintage of Pézenas; once again Grenache dominant with 30% each of Syrah and Carignan.  This is given a longer ageing in demi-muids.  Good colour.  Nicely rounded nose with some spicy fruit.   And on the palate more depth than the Languedoc, with more structured and weight.  Good balance and some lovely spicy fruit, but still very young.   The oak is well-integrated.  And it promises well for the future. 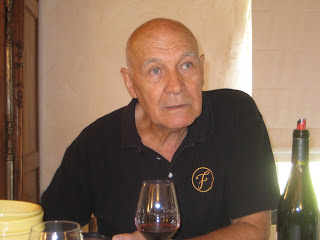 We talked about this year’s harvest.  Some Carignan for carbonic maceration was being picked later in the day.  2016 has been particularly difficult for Syrah, with small berries and high alcohol levels.  The average yield is 20 - 30 hl/ ha.  The year is marked by a lack of water - and Guy observed that  Claude Bourguignon has been advising him on rootstock that send out deep roots in search of water, so that his vines have not suffered from water stress.   The vineyards were certified as organic in 2016, but ‘that is not complicated enough’ or challenging enough so now they are working on biodynamics.  A viticulturist  who worked with Anne Leflaive in Burgundy,  advises them.

And then we discussed sales opportunities, with Guy making the pertinent observation that ‘we are méconnu dans un region méconnu - an unknown estate in an unknown region’.  But that is sure to change.  The wines will be shown at the Rising Stars tasting in London at the end of October. 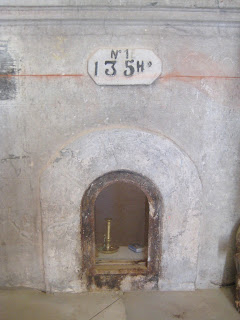 Murray said…
An idea for a "special" blog entry, stimulated by your story about Ch. La Font des Ormes: organic and biodynamic wine update. While visiting Languedoc, I have enjoyed wines from Dom. Treloar (no relation, same last name), Borie de Maurel and Dom. La Prade Mari. While these may not be officially designated organic, the viticulture and wine making follows the same principles. - Murray
15 October 2016 at 22:44

Unknown said…
Both Borie de Maurel and La Prade Mari are certified organic. Treloar is not and would not qualify for certification if it took the impossibly unlikely course of seeking it.
4 November 2016 at 19:32