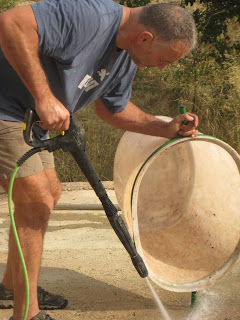 I am always thrilled to make a new discovery, and in this instance, one in my own village of Roujan. We tracked down Philippe Gallart in a modern house, on a hillside outside Roujan, just opposite the chapel of St.  Nazaire.   The vintage had finished two days earlier and he was busy washing beines, which probably translates best as the large boxes, or buckets, used for carrying grapes.     Philippe has a welcoming smile, but comes over as quite reserved, and yet he is a man of many talents.  It turned out that he has played rugby for France - there is a photo of him at Cardiff in his cellar - and why is there a saxophone on the label?   Simple; the tenor sax is his instrument.   In an earlier career he worked for IBM and then began buying vines in 2000.   Initially his grapes went to the Neffiès coop, but once he had built his cellar, he began making wine.  He was inspired by the wines of nearby. Domaine de Brescou, but has not followed any formal courses.  He also said that he owes a lot to David Astruc of Domaine de la Resclauze in Neffiès.

Altogether he has four hectares, in eight different plots, by the chapel and in Neffiès.   Grenache has been hitherto been used for rosé, but he will make a red Grenache next year. And then there is a Merlot and a Syrah; both monocépages - and Vin de France - he does not like blends.  Nor does he like wood; everything is fermented and stored in fibre glass vats.  Arbournières is the lieu-dit around the chapel; it means terries faceless, or easy land in Occitan.  Philippe explained how he was advised to plant Syrah; the coop members didn't plant it - it was too complicated, and also susceptible to disease and not very productive.

2014 Merlot,  Vin de France
Some ripe cassis fruit on the nose and ripe fruit on the palate with a youthful streak of tannin.
It was fresh and ripe with good varietal character.   Philippe explained that he favours a long maceration, four to six weeks.

2015 Syrah, Vin de France
Another long maceration with some firm peppery fruit on the nose. Quite a sturdy firm peppery palate, with a hint of vanilla as though it might have been in oak.  But there was not a barrel in sight.  It was still very young.  All the grapes are destalked, with a classic vinification. No carbonic maceration here.  A very good balance, ripe but not confit and an appealing peppery note.

Philippe enthused; wine music and rugby are three great vectors of communication.  He has no
problem in selling his wines.  You have to go to Le Wine Shop in Pézenas for the Syrah, which is sold for 7.50€.  For the moment they do not have the Merlot.  And we finished with a promising taste of 2016 Syrah, which just finished fermenting with some ripe peppery notes and a harmonious balance of fruit and tannin.

I was left with an impression of a man who is content with his lot - bien dans son peau as the French would say, knowing where he is going, and achieving it.
Email Post

aillis said…
Some one recently gave me a bottle which will be tested next month but as a jazz /rugby nut was intrigued by his biography and just to be pedantic ,he plays an alto sax not tenor.
27 September 2017 at 07:58