Back in the 1980s, St. Martin de la Garrigue was one of the pioneering estates of the Languedoc and the property of the Henry family.  Since then François Henry has gone on to make wine very successfully in St. Georges d'Orques. (See an earlier post) and St. Martin was owned for a while by an Italian,  Umberto Guido, with the talented winemaker Jean-Claude Zabalia, and then in 2011 the property was sold to a Russian, Boris Pukhunov.  Now, in his absence the estate is run by Jean-Luc Paret. Mr. Pukhunov already has extensive vineyards in Stavropol and in Bulgaria, and also owns one of Russia's oldest distilleries, that was established before the Revolution, as well as several wine shops in Russia.  And in the Languedoc he is also the owner of Château de St. Louis in the Corbières cru of Boutenac.  As for Jean-Luc, he has had a varied career, including 20 years in Moscow. 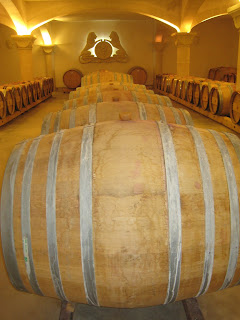 Mr. Pukhunov is investing considerably in the property.  The château itself which dates back to the 16th century, with its own chapel, has been extensively renovated and now provides a stylish, and expensive holiday rental.  The cellars were already fairly streamlined but there is now a new barrel hall that would not be out of place in Bordeaux, as well as a welcoming tasting caveau.

Jean-Luc and his winemaker, Jean-François Farinet took us through the range of wines. Jean-François has previously worked in Burgundy and in the Rhône valley, with Delas. 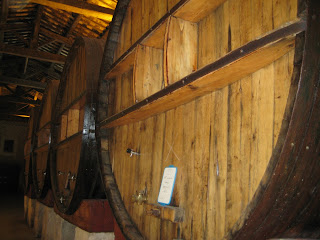 2015 Picpoul de Pinet - 9.10€
Jean-François explained how they pick about two weeks later than the average, as they want really ripe grapes.  Picpoul is a fragile grape that can easily suffer from rot in the moist sea breezes of the area.  They also give it some skin contact and ferment at a low temperature, which makes for more aroma.  Picpoul should always have a lemony note and also some salinity; the skin contact can give a slightly bitter finish, which is desirable.  They want a wine of complexity and character, even for a relatively simple mono-cépage. The result is quite rich, with satisfying mouthfeel and texture, especially for a Picpoul, but with good tension from the acidity.

Bronzinelle Blanc, Languedoc - 10.00€
A blend of 55% Grenache Blanc, which gives some weight, with 15% Marsanne and 20% Roussanne for aroma, and just 10 % Picpoul to give some citrus and iodé notes.  The blend is made immediately after fermentation, and the wine now longer aged in oak, as it was previously.  The nose is elegant and the palate rounded with some attractive floral flavours.  For Jean-François the interest of the Languedoc is above all the ability to blend.

Bronzinelle Rosé, Languedoc - 6.90€
A blend of Cinsaut and Grenache, both pressed, so given minimum skin contact, and essentially made like a white wine.  Delicate raspberry fruit on the nose; quite ripe and rounded with fresh acidity and a long finish.

2013 Bronzinelle, Languedoc  - 10.00€
50-year-old Syrah, made by carbonic maceration, and also some old Carignan.  A traditional vinification for younger Syrah, Grenache and Mourvèdre.  They blend after the malolactic fermentation and make final blend after élevage.  70% of the wine spends 12 months in wood, and they are gradually shifting from 220 to 500 litre barrels.  Medium colour.  Fresh spice on the nose and palate, with black fruit and garrigues and supple tannins.  They consider it to be the most representative of the terroir of St. Martin.  And it is a wine that I remember enjoying when François Henry made it in the 1980s and I do not think that it has really changed in style, fine-tuned yes, but it still retains the appealing spicy fruit of the Languedoc.

Next came their Grès de Montpelier ‘which represents our savoir faire’, and comes from older vines with lower yields.  They now have 18 hectares classified as Grès de Montpellier, making it the most western point of the zone.  It is s separated from the cru of Pézenas by the Hérault river.  The soil throughout the Grès de Montpellier is similar, namely grès, or sandstone, but there are climatic differences.  Lunel on the eastern limit is much warmer. 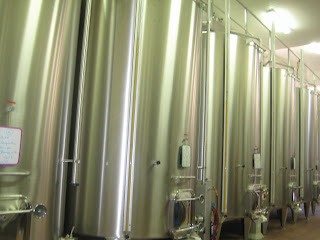 2013 Grès de Montpellier - 16.00€
Syrah, Mourvèdre and Grenache, older vines, and with a traditional vinification, but with quite a short maceration.  They want silky tannins and to avoid any over-extraction.  The wine is aged for 12 months in 500 litre barrels, of one to five fills, but none new.  Jean-François does not like new wood.  And the wine is very supple, with some rich fruit, but retaining its elegance, with a rounded finish.  The Mourvèdre gives freshness, and finesse, especially on the finish.  It was youthful and already drinking well, but also with some ageing potential.

And then we tasted their first vintage, the 2014, of Château de St. Louis in the Corbières.  The estate totals 120 hectares with 24 hectares of vines, including three of Boutenac.  The estate apparently needs a lot of work, especially in the vineyards, and they are building a new cellar.

2014, Corbieres, Boutenac – 16.00€
The blend is 55% Carignan, 35% Syrah and 10% Grenache.  The profile was quite different; the Corbières was more Rhône-like, with more Syrah.  It was sturdier, more powerful and structured, with red fruit and rounded harmonious tannins.   It was a good start, and I subsequently tasted the Prestige red and white at the Rising Stars tasting in London.

2014 Corbières Prestige white – 6.60€
40% Grenache blanc, 40% Marsanne, 20% Bourboulenc.  Medium colour. Quite rounded nose with some white flowers on both nose and palate. And a salty bitter note on the finish.  Quite intriguing. 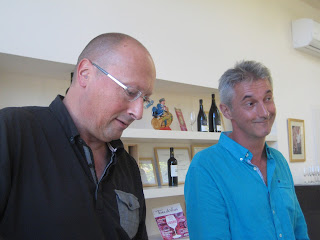