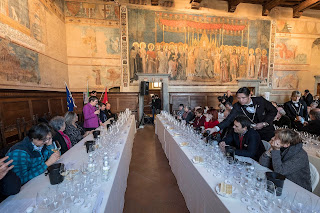 I was in San Gimignano last summer to write an introduction for a book that celebrates the 50th anniversary of the DOC of Vernaccia di San Gimignano - Tuscany being another enthusiasm apart from the Languedoc.  And over dinner my friends said:  You could present our tasting in February.   And so I found myself in San Gimignano again last week.

The occasion in question was part of a series of tastings for what the Tuscans call their Antiprima tastings, or in French en primeur, showing the new releases particularly of the red wines, Chianti Classico, Vino Nobile di Montepulciano and Brunello di Montalcino.   San Gimignano, although it also produces red wines, likes to focus on its white wine and is bold enough to compare its white with a wine from elsewhere.   So they asked me to chose a wine to compare and contrast with Vernaccia di San Gimignano.   I might have chosen Chablis, but that has already been done, and so it was natural to look in the Languedoc, where La Clape was the obvious choice, for various reasons.

Bourboulenc is the principal grape variety of La Clape, and although it features in other southern appellations, it is really in the vineyards of La Clape that it comes into its own.   It is not a particularly aromatic grape variety, and neither is Vernaccia.   Bourboulenc has to be blended with other varieties, Grenache Blanc, Roussanne, Marsanne, Vermentino, whereas Vernaccia can stand alone.  Both produce wines with structure, texture and ageing potential.

The other important common thread is a marine influence.   Six million years ago the vineyards of San Gimignano were under the sea and today you find fossils galore, oyster shells and other shells in the limestone and clay soil.   Calcinaie’s vineyard Vigna ai Sassi is named for just that reason, it is full of stones, and the name of the estate implies the presence of limestone.  The name La Clape - ignore its unfortunate connotations in English - originates from clapas which means stones in Occitan.   And the vineyards of La Clape are close to the sea, on the Massif de la Clape by the city of Narbonne; some are high up in the hills; others look towards the sea and the étangs that surround the Massif, which was once an island, until the river Aude changed its course in the Middle Ages.

And finally La Clape Blanc and Vernaccia di San Gimignano are two white appellations, each with a big brother that is red and more important in quantity and vineyard area. Only about 100 hectares of the 1000 hectare appellation of La Clape is white, and not all the wine growers make a white wine.  And in San Gimignano the proportion is higher, 780 hectares out of 1900, but none the less most wine growers make more red than white wine.

So my task was to select six white wines from La Clape to compare with six from San Gimignano.  Choosing the La Clape was not too arduous.  The syndicat organised a tasting of 20 wines, and six stood out.   San Gimignano was rather more challenging.   it was deemed easier for the bottles to travel to me in London, rather than my travel to San Gimignano. so one morning just before Christmas TNT delivered a pallet of wine, 59 samples, in duplicate, in case there were any problems with cork.  As you can imagine that required quite some organisation, unpacking 118 bottles and organising 59 of them in some sort of logical order, with vintages ranging from 2015 back to 2002.  It took a whole morning and then the next morning I tasted all 59 bottles and created a long short list, and then the following morning I whittled 20 bottles down to just six.   Meanwhile our neighbours were all discovering the delights of Vernaccia as I distributed bottles with just a couple of tasting samples taken from them down the street! 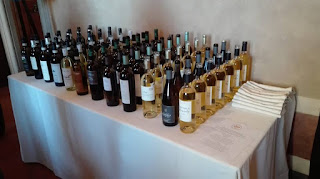 The tasting took place in the Sala Dante in the centre of San Gimignano - it is positively awe-inspiring with its medieval frescos, and it is called the Sala Dante as it is the place where Dante as ambassador of Florence pleaded the cause of Florence against Siena in 1406.

So this is what I chose., with La Clape going first.
2016 Le Marin, Domaine Sarrat de Goundy
A relatively new estate.  Olivier Calix studied history of art and worked at the Guggenheim in Bilbao and at the Museum of Contemporary Art in Barcelona and took over his parents’ vineyards in 2003.  The blend is 70% Bourboulenc, with 15% Grenache Blanc and some Macabeo and a little Viognier. And although the wine was the youngest of the tasting, it held its own beautifully with some perfume on the nose and some salty notes and good balancing acidity on the palate.

2015 La Brise Marine, Château la Négly
Jean Paux-Rousset inherited this estate from his mother in 1992 and has completely renovated it for it was typical of the old style Languedoc estate with Aramon, Alicante Bouschet and Carignan grown for bulk wine.   Didier Lacreu is the talented winemaker at Négly and this is a blend of 60% Bourboulenc and 40% Roussanne, and the result of very careful winemaking.  And the wine was firm and structured, fresh and salty.

2015 Cuvée Aimée de Coingy, Château Mire l’Etang
The vineyards here do indeed look at the lagoon.   And the blend is 50% Bourboulenc, planted in between 1975 and 1982 with 40% Roussanne planted in 1990 and 10% Grenache Blanc from 30 year old vines.  The wine spends time on the lees which gives it some satisfying weight with some rounded but firm fruit.  Aimée de Coigny was the mistress of the local landowner, the Duc de Fleury.

2015 Cuvée Henry Lapierre, Château Rouquette sur Mer
This a large estate outside Narbonne Palate, owned by Jacques Boscary.  Henry Lapierre was his grandfather.  He makes two cuvées of La Clape, Cuvée Arpège and this oak-aged wine, which is a blend of Bourboulenc and Roussanne.  This was more rounded on the nose and palate than the preceding wines, with touch of oak, but was still firm and salty on the finish.

2014 La Centaurée, Château Pech Redon
This was one of the pioneering estates of La Clape, and the property of Christophe Bousquet, who planted his first Bourboulenc in 1989.  He now has just four hectares of Bourboulenc and Grenache Blanc, in some of the highest vineyards of la Clape. The blend is 80% Bourboulenc with 20% Grenache blanc and La Centaurée is the name of a rare orchid that you find only on the Massif.  The Bourboulenc is fermented in 500 litre oak barrels and given 12 months ageing on the lees but without any bâtonnage.  For Christophe, Bourboulenc is interesting for its texture.  There is a touch of oak on the nose, but the palate is very firm and structured, tight knit with a salty finish.

2006 Grand Vin, Chateau d’Anglès
Eric Fabre, who used to be the technical director of Château Lafite, bought Château Rivière- Haute, the historic estate of La Clape for white wine, when it was owned by Jean Ségura, and also the neighbouring property of Château Rivière-Basse and has amalgamated them as Château d’Anglès, named after a local landowner.  Eric came to La Clape as he was particularly attracted by the potential for Mourvèdre, but he also makes exemplary and age worthy white wine.  This Grand Vin, as opposed to the Cuvée Classique is aged in oak and is a blend of Bourboulenc from 80 year old vines, as well as 60 year old Grenache Blanc, and a little Marsanne and Roussanne from 20 year old vines.  It had a richer, more mature  nose than the others, with some rounded ripe fruit and some good acidity and a firm finish on the palate, amply demonstrating the ageing potential of la Clape. 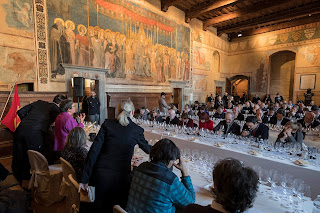 2015 Vigna a Solatia,  Casale Falchini
One of the pioneering estates of San Gimignano, set up by Riccardo Falchini in the 1960s, and helped by Giacomo Tachis, Antinori’s innovative oenologist.  Now run by Riccardo’s sons, Michael and Christopher.  Vigna a Solatio is a large vineyard, from which they also make a riserva quality.   This is firm and salty, with a long finish.


Nadia Betti and Renato Spanu have their main cellar within the confines of the city of Siena - it is an enchanting spot, an oasis of countryside in within a town.  And for their San Gimignano they have a small cellar within the commune as the wine of San Gimignano cannot be vinified outside the area.  Their vineyards are organic.    For the riserva they select the best grapes with the aim of a wine to age, with a good acidity balance; part of the wine is fermented in wood, and there is some bâtonnage, and the result is a very salty but rounded wine.  For Renato the salinity comes from the combination of the grape and the soil.

2014 Vino Fiore, Montenidoli
Elisabetta Fagiuoli comes from the Veneto where her grandmother and great grandmother had made wine, and she bought this estate in San Gimignano with an inheritance from her grand mother.  But when she arrived in San Gimignano in 1971, she was, as she put it, an illiterate as far as wine was concerned.   These days she makes she makes delicious wines, of which Vino Fiore, from free run juice, is the most elegant.  It also ages beautifully.   The taste is fresh, with a long salty finish,

2010 Vigna ai Sassi, Tenuta Le Calcinaie
Simone Santini planted his vineyard of Vigna ai Sassi in 1986, when an uncle bought the next-door house and said ‘you can do what you like with the land’.   And to plant Vernaccia was the obvious choice.   Calcinaie means limestone and Sassi stones, and the vineyard is just  that, with lots of fossils. Simone now has 12 hectares of which Vigna ai Sassi is just one hectare.   He is a pioneer of organic viticulture in San Gimignano.  There is no oak in this wine but it has spent about 18 moths on the lees, which gives it weight and substance, with a certain nutty maturity.

2009 Hydra, Il Palagione
Giorgio Comotti comes originally from Milan and spent 25 years looking for a house in Tuscany, and made his first wine in 2000.  For Vernaccia he makes two wines, Hydra and an oak aged riserva Ori.   This is another great example of how well Vernaccia ages, with rich salty flavours and a lovely concentration on the finish.

As you will have noticed, I could not help using the words salty and salinity for both La Clape and Vernaccia di San Gimignano and in fact the comparison was even more successful than I could have possibly imagined.

telas mosquiteiras said…
This comment has been removed by a blog administrator.
13 March 2017 at 17:01