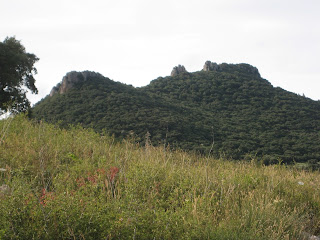 The vigneronnes ballades are proving be something of a climatic challenge this year.  First we sweltered in a heatwave around the Pic St. Loup and three weeks later the weather had changed so that a cold wind was blowing hard for the Terrasses du Larzac walk.   Most of the sensible vignerons were well wrapped up in thick fleeces and puffa jackets - some of the walkers were rather more optimistic - the sun after all was shining in St Saturnin, but up in the hills above the village a 60 kms per hour gale was blowing and many of us shivered.   However, the walk was a stunning route, out of St. Saturnin up into the hills above the village, almost to the foot of the Rocher de la Vierge, with dramatic views of Mt Baudile and in the other direction, we had the valley of the Hérault at our feet. 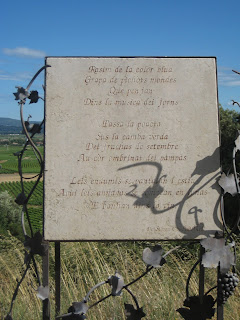 We set off from the centre of St. Saturnin, a gentle climb up hill at the start of what they call the poets' walk, with various plaques of Occitan poetry, to the first étape, with a mise en bouche of a delicious crumble with thyme, blue goats cheese and a concassé of summer vegetables.    Olivier Faucon from Mas Combarèla was participating in the ballade for the first time and showing his rosé from his very first 2016 vintage, Des Si et des Mi.  It is a blend of Grenache and Cinsaut, with some fresh fruit, a herbal note and an elegant finish and made a great start.  I also liked the red wine Domaine des Olivèdes, another new producer, up in the hills at St. Jean de Buège, which is one of the most northern parts of the sprawling Terrasses.  And Domaine de Montcalmès 2014 red, with 60% Syrah, some Grenache and some Mourvèdre, was spicy and elegant, supple and youthful. 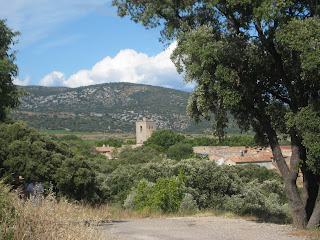 The track took us through the garrigue, gradually climbing to the next étape for a tartare de magret  fumé garnished with apple and chives.  Here I tried Grand Pas from Domaine du Pas de l’Escalette, a rounded mouthful of Grenache with a little Cinsaut.  Graeme and Alice Angus from Trois Terres in Octon were showing Saut du Diable, with 70% Grenache, and Syrah and Carignan, with some spicy cherry fruit.  Alice explained how they had realised that morning that the original position of the étape was far too windy, and that they had had to move off the brow of the hill for a little shelter.  None the less the wind was still blowing, but the views were magnificent.   Les Vignes Oubliées rouge from Jean-Baptiste Granier was another Grenache dominant wine with some Syrah and Carignan, with some ripe fruit.  I also like Estelle Salles’ Capitelle des Salles, Hommage, with more ripe fruit.   As you will appreciate, conditions did not allow for detailed tasting notes. 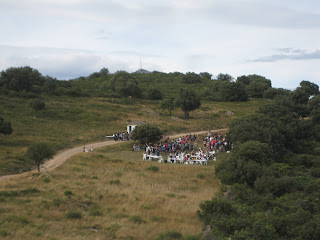 The path continued along the ridge and then into a grove of pine trees which provided some welcome shelter.  Here we enjoyed   a delicious calamar à la languedocienne, and some tasty black rice.  I chatted to Marie Chauffray, who was pouring La Reserve d’O, with some spicy fruit - she has handed over the presidency of the Terrasses du Larzac to Eric Ajorque of Mas Conscience and was relishing the freedom of less responsibility.  Charles-Walter Pacaud from Domaine la Croix Chaptal was pouring his Clairette du Languedoc - he is one of the few people to take this old appellation seriously - with rounded texture fruit and a streak of tannin, to compensate for the soft acidity.  The other white wine of the étape was le Clos Rivieral, les Fontanilles, an intriguing blend of Grenache blanc, Roussanne and Viognier aged in a Burgundian barrel, with a full malo.  Although the oak was present, the wine was textured with fresh acidity and a touch of fennel.   Our friends, Paul and Isla from Domaine de Sarabande in Faugères were enthusing about it too.  I also like Carlines from Mas Haut Buis, with some ripe fruit balancing the tannin and Clos Maia 2015, with spice and some structured oak. 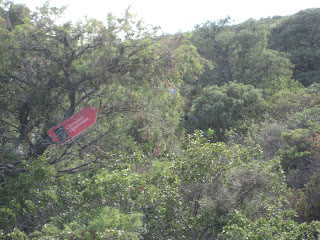 The main course was situated in the absolutely windiest part of walk, which made tasting wine - and also spitting - as witnessed by the spray on my tasting notes - quite a challenge.   However, the cuisse de canette confit and a delicious vegetal mixture helped to warm us, as did the selection of wines.  Vincent Gourmard from Mas Cal Demoura was pouring Terre de Jonquières 2015, from all five Languedoc varieties, with some elegant fruit.  Rémi Duchemin from Plan de l’Homme was showing Sapiens 2014 from 70% Syrah, with Grenache and Carignan, with some black fruit and a sturdy finish.  Mas Conscience l’Eveil, a blend of Syrah, Grenache and Cinsaut was young and fresh with ripe fruit and an elegant balance.  I chatted to Jean Natoli who was showing La Villa Romaine from Mas des Quernes.  It is blend of Mourvèdre, Carignan and Grenache - he does not yet have any Syrah - and was firm and structured, with good fruit.  I also tasted Domaine St. Sylvestre, a perfumed wine that was predominantly Syrah, and 2015 Nuit Grave from Mas des Chimères, with some ripe spice and a tannic streak. 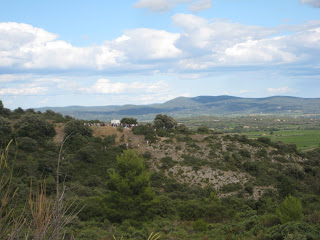 It was with relief that the track then took us down hill back into the welcoming square of the village, where there was cheerful music as well as goats cheese and dessert to warm us.   The best accompaniment to the goats cheese was an original wine from Domaine de Brunet, a blend of Roussanne, Vermentino and Viognier which was golden in colour and rich and textured.  Alain Caujolle-Gazet was showing his 2015 La Coulée Douce, with fresh fruit and an elegant finish, and Mas Jullien was offering 2014 Etats d’Ame, with some fresh peppery perfumed flavours.  I also enjoyed Gavin Crisfield’s La Traversée 2015,  a blend of Cinsaut, Grenache, Carignan and Syrah, which was fresh and perfumed, with balancing structure.  Gavin observed that he has participated in all the ballades - this is the 15th - and there has never been one quite like this, for the extraordinary weather. 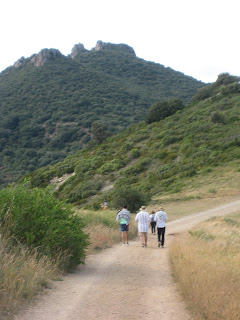 And at the dessert end of the square we chatted to Virgile Joly and enjoyed his 2016 St Saturnin rosé, which was only the second vintage of this wine.   It is quite a rounded rich style of rosé and was a good note on which to finish.  Then we headed home to warm up and I have to admit that I succumbed to a wee dram of malt whisky to help the process! 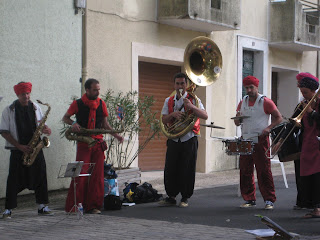