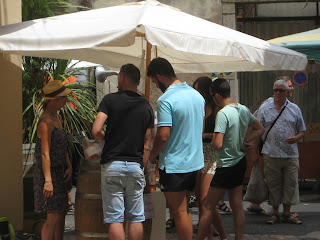 The annual Faugères fête is a great occasion for catching up with vignerons - talking of which, have you ever realised that the anagram of vignerons is ivrognes or drunkards???!   I don’t do crosswords, so I tend not to think about anagrams, so it had to be pointed out to me ….so I thought I would share it with you.  This year I was selling my book, The wines of Faugères, so did not do so much tasting, but still managed to check out a few bottles, and have lots of interesting conversations as people came past my table. 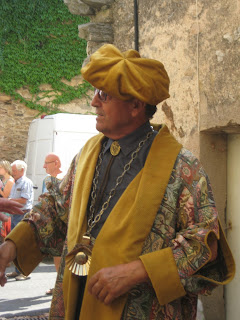 As well as the usual suspects, there were two new estates showing their wines.  My next door table, or rather barrel in their case, was Domaine les Serrals, Chloé Barthet and Frédéric Almazur, who made their first wines last year.  The range will eventually comprise a pink and a white and three reds. At the fête they had the pink and the first red ready for tasting.  I really liked them both.  The rosé is a blend of equal parts of Grenache Noir and Mourvèdre, combining the gourmandise  of the Grenache and the freshness of Mourvèdre, picked early to retain the freshness and made from pressed grapes  The wine remains on its lees and is bottled without any SO2.  It was a pretty colour with some fresh fruit and a nicely balanced palate.  I thought it a promising start.  The first red Sur le zinc is a  blend of 60% Syrah and 40% Carignan, kept in vat.  There is a portion of carbonic maceration for the Syrah and the overall result is some lovely perfumed fruit, with a streak of tannin.  Chloé enthused about doing pigeage, and what fun is it to put your feet in the vat.  I might be able to go and join her next year, if I play my cards right! 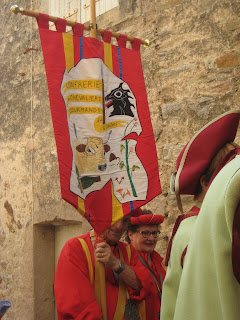 The other new label was la Graine Sauvage for a delicious white wine, a lovely blend of  60%  Grenache blanc with some Marsanne and Roussanne with some white blossom on the nose and a beautifully textured palate.  It too promises very well. Sybil Baldassarre explained that she has been making wine since 2000 in various places, but this is her first Faugères. 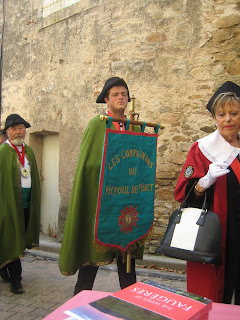 And there is another new wine grower in the pipeline, Frédéric Desplats, who has rented Frédéric Alquier’s ten hectares and also bought another ten hectares in Roquessels, with a partner, Denis Degros.   He described it as a retirement project and it is all very much in the early stages to the extent that they have yet to decide on the name of the domaine.   But the first wine will be made this year so I am looking forward to visiting in due course. 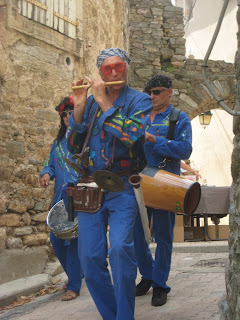 Another relatively new estate,  Mas Nicolas had a lovely pure Viognier with very convincing varietal fruit, not as rich as a Condrieu but elegantly understated, with good texture and balance. 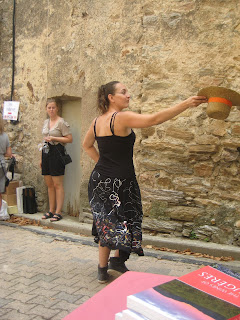 2016 Allegro from one of the longer established estates, Domaine Ollier-Taillefer was as good as ever, with some fresh herbal fruit, and an elegant depth of flavour.   And my white finale was 2000 Aurièges, from Domaine Clovallon on the other side of the hills outside Bédarieux, with a golden colour and ripe flavours and lots of intriguing notes that keep you guessing, and coming back for more. 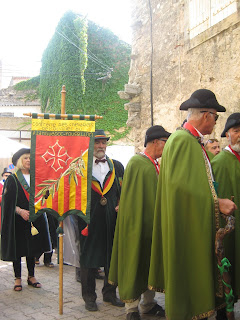 And as usual other confréries were visiting and processed through the narrow streets of the village with much fanfare and music and there were also some musicians accompanied by a particularly energetic dancer.  I was full of admiration given the soaring temperatures of the morning and was very relieved that I had a table in the shade. 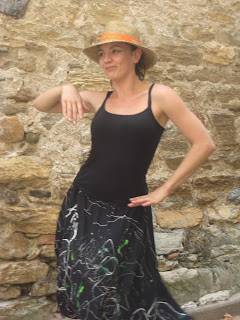 Alan March said…
Glad you liked Sybil's white, my wine of the day on my report of the event. I am biased as I know her and Alexandre quite well.
Hope you sold lots of books
17 July 2017 at 17:46