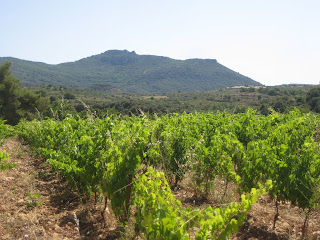 It had been a while since I have visited Béatrice and Sébastien Fillon at Clos du Serres.  Their new cellar just outside the village of St. Jean de la Blaquière is finished and they are delighted with it.   Béatrice explained how their range of wines have evolved, so that they have now make five cuvées of red, one village cuvée and four based on four different vineyards, with different terroirs, rather as they do in Burgundy.  To prove her point, Beatrice took us for a drive around the village to see the various vineyards.  St Jean de la Blaquière lies in the hills of the Terrasses du Larzac, at 200 metres, behind the Rocher des Vierges and the soil is extraordinarily varied.  The vineyards are surrounded by hills, the natural circle of the plateau of the Larzac.  It is a wonderfully scenic spot.  There are dry stone walls everywhere, probably about 100 years old and numerous small tombs or ‘caveaux’ which look like tiny chapels surrounded by vineyards.  Beatrice explained that they have farmed organically since the beginning.   The wild boar are a problem; they try and enclose their vineyards with wires, but they are not always very effective. 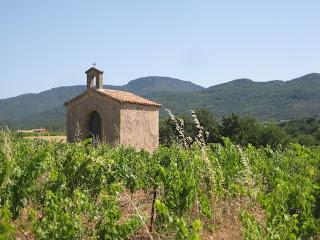 And then back at the cellar we tasted.

2015 Le Saut du Poisson, AOP Languedoc Blanc - 14.00€
The grapes for their white wine are grown on red ruffes, very dramatic deep red soil, originating from old volcanoes.  The blend is 70% Grenache Blanc with 15% each of Carignan Blanc and Vermentino.  The Grenache blanc vines are 50 years old and they have planted a hectare each of Carignan Blanc and Vermentino.  A quarter of the wine is fermented and aged in barrel.  The nose is very fragrant with herbal hints of Vermentino, and the palate is long and fresh, with an intriguing mineral finish. Beatrice observed that there is a history to build with white wine and that will take time.

2015 St Jean, Terrasses du Larzac  – 11.00€
This is the village blend, coming from all four different terroirs, with some tapenade on the nose, and rich black fruit on the palate, but with youthful tannins and the fresh finish that is characteristic of the Terrasses du Larzac.   It is a blend of Grenache Noir, Cinsaut, Oeillade and Syrah and just a little Carignan and is aged in cement vat rather than barrel.

2015 St. Pauline, Terrasses du Larzac – 12.00
This is from galets roulées, in the southern part of the village and is a blend of 60% Syrah with Cinsaut and Carignan, fermented in tronconique vats, with an élevage in concrete vats.  There is fresh peppery fruit on the nose and also on the palate, with some appealing perfume and a lovely freshness.

2015 le Palas, Terrasses du Larzac – 18.00€
This is a vineyard of schist and sandstone, where they also have beehives and they sell some honey.  The blend is 60% Syrah with some Grenache and Carignan, and the flavours are richer and fuller, with red fruit and a fresh finish.   The élevage is the same as for St. Pauline but the flavours are quite different, amply illustrating the different between schist and galets roulées.

2015 les Maros, Terrasses du Larzac– 14.00€
Les Maros is a vineyard of schist, with 50-year-old Grenache, and facing south east so that you can see the white buildings of Château la Sauvageonne on the hillside opposite.  The Grenache Noir is blended with some Cinsaut and Carignan.  The palate is dominated by the elegant cherry flavours of the Grenache, and it is silkier and softer than the wines based on Syrah, and ripe, but also with a fresh finish.

70% of this comes from 100-year-old Carignan, gobelet vines grown on sandstone, as well as schist in the north-eastern part of the village.  It is their homage to Carignan, which they rightly see as the emblematic grape variety of the Languedoc.  The wine is fresh and elegant, with red fruit and a streak of tannin, and made a great finale to our tasting

And to emphasise their Burgundian philosophy, they have moved to fat shouldered Burgundy bottles rather than taller square-shouldered Bordeaux bottles.    However, Béatrice emphasised that what they really want is buvabilité, drinkability and that they have certainly achieved. 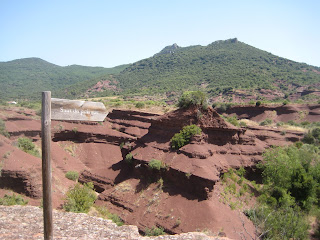 And then we adjourned to the village restaurant, La Petite Fringale, which has just changed ownership and is looking very promising.  And there we met up with other wine growers from the village, namely Jean-Baptiste Granier, from Les Vignes Oubliées, Anne-Laure Sicard from Mas Lasta and Krystel Brot of le Clos Rouge.  They are all involved in a project to take over the old cooperative building of the village to create wine cellars for the newcomers and also maybe give the restaurant a larger space.   It represents a firm gesture solidarity in the village.

Meanwhile over lunch I enjoyed Jean-Baptiste’s 2011 Les Vignes Oubliées which was rounded with some rich leathery fruit on the nose and perfumed cherry fruit on the palate with lots of nuances.  80% of the wine is aged in demi-muids and it is a blend of Grenache Noir and 20% each of Syrah and Carignan.

Krystel had brought a delicious pure Cinsaut, 2016 Piccolo, Pays d’Oc, with fresh perfumed fruit and a certain concentration.   She observed that the grapes are usually like large olives, but in 2016 they were more like petit pois!  Her second label is Babel, a reflection on the diversity of nationalities and languages amongst her pickers.

Anne-Laure made her first wine in 2016.  It would be bottled the following week, so she brought along a vat sample.  She vinified just two hectares, a blend of Grenache Noir, Syrah and Carignan, with perfumed peppery fruit and good concentration.  It was a very happy occasion and the common cause of the wine growers promises well for the future of the village. Alan March said…
Interesting read Rosemary. Good to see growers getting together to help each other and newcomers, but like the 9 Caves project at Banyuls and others.
4 September 2017 at 18:37

FenixSEO said…
Hi fellas,
Thank you so much for this wonderful article really!
If someone want to read more about that Drink wine for free I think this is the right place for you!