The 2017 vintage in the Languedoc. 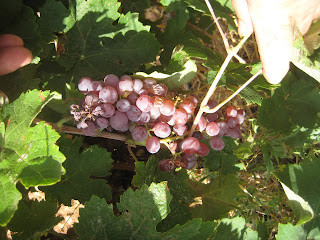 In a nutshell, quantity is low and quality is high.   Frost towards the end of April caused serious damage in several parts of the Languedoc.  This is virtually unheard of - the last time there was any frost of any note in the region was in 1991 and the damage was worse than it might have been as the vines were well advanced, enjoying a warm spring.   In some areas the weather was not great at flowering, so that had an impact on quantity; there was been the odd bout of hail,  and then came the summer drought.   Much of the Languedoc has not had any serious rain since May.  How about this for rainfall figures - given to me at Domaine des Arnasseaux east of Montpellier

May 25th - 25 mms
10th June - 6 mms
Two sprinklings in July amounting to 3mms
August - virtually nothing and they are still waiting for rain. Certainly everything looked very dusty, especially to eyes accustomed to the lush green of the English countryside this summer.

And the harvest is early.  Friends in Mireval, at Domaine de la Rencontre picked the grapes for their sparkling Muscat at the end of July, as did Château de Jau in Roussillon.    Mid-August has been a popular time to start picking white grapes such as Chardonnay and Sauvignon  - one estate started on 17th August this year, compared to August 16th in the heatwave year of 2003.  Normally they would expect to start picking about 28th August.

And consequently yields are down.  Cinsaut grapes that usually look like little plums are the size of small peas.   Remy Pedreno at Roc d’Anglade reckons his white harvest is down by 60%; 75% for rosé and 40% for red. and he is far from being alone.   Most people are reporting significantly lower quantities.  But the quality is great - with very healthy ripe grapes, that are fermenting beautifully.   Some people have finished harvesting; others are still picking, for not all the grapes are uniformly early. 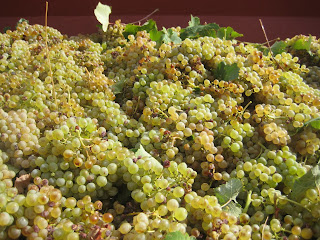 Alan March said…
Same story at Mas Coutelou. Beautiful grapes, clean and healthy but small berries. Yields down 30%+ however. Other than a few drops one morning no rainfall since June 26th.