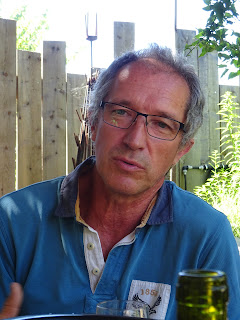 There is a new wine grower in Faugères, with an old established name.   Gilbert Alquier was one of the pioneering wine growers of the appellation, one of the first to bottle his wine, rather than selling it en vrac, and one of the first to experiment with an élevage in small oak barrels.  When he died, his two sons took over the family vines, and then went their separate ways, with two estates, Domaine Jean-Michel Alquier, and Domaine Frédéric Alquier.  Sadly Frédéric died a a couple of years ago, and now his widow, Florence, has rented her vines to Frédéric Desplats, who has taken Florence’s name for the name of his estate.   He has also bought some vines of his own from a retiring cooperative member in Roquessels, so that he is farming twenty hectares in all, with two partners.

I met Frédéric Desplats at the welcoming wine bar, le Picamandil, in Puissalicon for a tasting of his very  first vintage, which was 2017.   In a previous career, Frédérique was a heating engineer; he was brought up in Lille and has always loved wine.  A friend in the Rhône Valley suggested vineyards there, but the price of vines in Faugères is more much attractive 15-20,000€ a hectare, as opposed to 40,000€ in the southern Rhône  I think he has made the right choice, irrespective of price.  Faugères is a much more distinguished and individual appellation than Côtes du Rhône.   As Frédéric has no experience of wine making, he has employed the very able Jean Natoli as his consultant oenologist, and the vines are being converted to organic viticulture.    2017 was a good year to start the conversion, with dry conditions.  In contrast the spring of 2018 proved much more problematic with unusual attacks of mildew, thanks to the unseasonal wet weather.

2017 Faugères Blanc, le Village -  9.20€
A blend of Marsanne, Roussanne and a little Grenache Blanc, from a vineyard just close to the southern edge of the village of Faugères.  Light colour with quite  fresh delicate nose. Not yet very expressive, but with a nicely rounded palate, with some white blossom and balancing acidity.  Still very youthful.  A touch of not unpleasing bitterness on the finish.    The élevage is in vat without any skin contact, and the grapes are not destalked, which makes pressing easier.   Minimum use of SO2.

2017 Faugères Rosé, Plô des Figues - 9.20€
Mainly Cinsaut and pressed to make for a delicate pale colour,  and vinified just like a white wine,  Quite a delicate rounded nose, with some dry fruit on the palate.  Elegantly vinous and lightly mouth-filling, to make more of a food than an aperitif rosé.

2017 Renaissance Faugères - 9.70€
This is the entry level red, mainly from Grenache Noir with Carignan, Mourvèdre and Syrah.  The name refers to the renaissance of the old domaine and Frédéric is not sure that he will use the same name again this year.   Nor is the wine likely to be the same, as the Grenache Noir this year is a ‘catastrophe’ as it has succumbed badly to mildew, with the uncharacteristically wet spring of the Languedoc.  Frédéric is far from being alone with this. problem  The wine is rounded on the nose and palate, with red fruit and spice, and a balancing streak of tannin.   It is eminently easy to drink.

2017 Puech Mourié, Faugères - 13.50€
Puech Mourié is the lieu-dit of the vineyard and the blend is mainly Carignan, mainly vinified by carbonic maceration, with some Grenache Noir and Syrah, and with an élevage in vat.  The nose is quite firm and structured, with some firm tannins on the palate, balancing the fruit, with good depth and length.   It needs time.

There is a third red wine in the pipeline, with 12 barriques and a further 90 hectolitres in a vat, in his cellar in the village of Faugères, destined to be the top of the range.  The final blend will be done next winter.

You immediately sense that Frédéric is thrilled by his change in profession, and at the same time fully aware and philosophically accepting of the problems that unseasonal weather can cause.   And he is delighted to have settled in the south.   He has made great start and deserves to do well.
Email Post