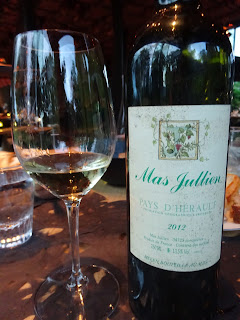 There is no doubt that the white wines of the Languedoc are improving enormously, making for some really exciting drinking.  So I was thrilled when Decanter magazine asked me to choose my top 30 Languedoc whites.   However, in some ways this is something of a poisoned chalice, for the selection of wines will only be as good as the wines offered for tasting.   Decanter always requires UK stockists for these kinds of tastings, so it was not possible for me to simply select the wines I had enjoyed most while doing my book research over the last twelve  months or so.   So I asked the very helpful people at the Maison du Languedoc, or the Maison de l’Occitanie, as it is now called, with the enlargement of administrative region, to organise a tasting, to enable me to choose 30 wines.   Altogether I tasted just over 100 wines to make my final selection.    And I was delighted to find that some of my favourites whites were in the tasting and showed well on the day.

The wines  covered a considerable range of provenance and grape variety.   The three key white appellations, Limoux, Picpoul de Pinet and la Clape were well represented.  Two wines, Chenin Blanc, Dédicace and Mauzac, Occitania from Domaine Rives-Blanques accounted for the majority Limoux selection.  Château d’Anglès had contributed both their Classique and their Grand Vin, both of which showed well.  There was also Cuvée Arpège from Chateau Rouquette sur Mer, and Château de Marmorières from La Clape.   The Picpoul selection was slightly more problematic, with an estate, with which I am not familiar showing best of all, namely Domaine Petit Roubia.  In an ideal world I would also have liked to have included Domaine Félines-Jourdan and Château St Martin de la Garrigue, to name but a couple of other Picpoul.

There were some original grape varieties and blends, with a Côtes de Brian Mosaique de Centeilles made from obscure and almost forgotten varieties like Araignan Blanc and Ribeyrenc Blanc.  Mas Champart with a blend of Terret and Grenache Gris was a firm favourite, as was Borie la Vitarèle, le Grand Mayol, from Bourboulenc, Clairette and Vermentino.   Simon Coulshaw’s  intriguing Roussanne, which is given some skin contact, showed well.   Other southern blends came from  the Pic St. Loup with Domaine de l’Hortus,  and from Faugères with Château de la Liquière, Cistus, and Mas d’Alezon’s Cabretta, made from Roussanne, Clairette and Grenache Blanc, while Domaine La Croix Chaptal represented the Languedoc’s oldest appellation, Clairette du Languedoc.  And although I tend not to enthuse about Chardonnay in the Languedoc, the example from Mas la Chevalière from a high altitude vineyard near Lunas proved a very convincing exception.

So what was missing?  I would have liked more examples of La Clape and Limoux, and also of the growing number of white wines from other parts of the Languedoc, including wines from some of the acknowledged stars.    Obvious omissions included Mas Jullien, with Olivier  Jullien’s wonderful blend of Carignan Blanc and Chenin Blanc.   It ages beautifully and I have drunk both the 2012 and 2008 recently with enormous pleasure.  What about the white wines of  Daniel le Conte de Floris, who is another enthusiast for Carignan blanc, inspired by Olivier Jullien?   Domaine des Aurelles, another Pézenas estate, makes some wonderfully age-worthy Roussanne.

I would have liked to have included Clos du Papillon from Mas Gabriel, but their importers, namely The Wine Society chose not to submit samples.  I have always enjoyed the white wines of Domaine du Pas de l’Escalette, from one of the more northern vineyards of the Terrasses du Larzac, along with Le Saut du Poisson from Clos du Serres in the village of St. Jean de la Blaquière.   Alain Chabanon in Montpeyroux makes a delicious pair of wines, Petit Trélans from Vermentino alone and Trélans from equal parts of Chenin Blanc and Vermentino.   Ollier-Taillefer's Allegro is another favourite.  And I love Pierre Clavel’s Cascaille Blanc from seven different varieties, Grenache Blanc, Roussanne, Vermentino, Muscat a petits grains, Marsanne and Clairette, which illustrates the diversity of the white grape varieties of the Languedoc.   And I have not mentioned Viognier, Albarino or Muscat.   One thing is for certain;  the choice will only continue to grow.
Email Post

Bob Rossi said…
The tasting and choices sound wonderful. I wish we could get more of those types of wines here in New England. But outside of a few sparkling Limoux and Picpoul de Pinet, Languedoc whites are rare.
18 July 2018 at 14:06

Rosemary George MW said…
I've just met an American couple who are setting up a mail order business, based in Seattle and concentrating on the Languedoc alone. I'll let you know when they are up and running.
19 July 2018 at 10:03