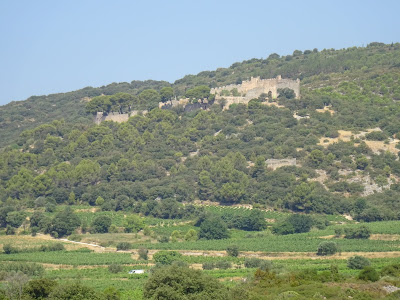 Jean Natoli has a broad vision of the Languedoc as he runs a very successful laboratory with clients from all over the region, and in particular the Terrasses du Larzac, but he also has his own vineyards, Mas des Quernes, outside Montpeyroux, which he runs with his son, Pierre, who started working with his father in 2012.   The first vintage of Mas des Quernes was 2010 and in addition they have a négociant business together, Gens et Pierres 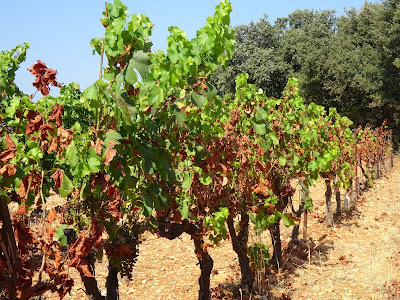 My friend, Alex Francis, from Vins et Viños in Carcassonne, wanted to meet Jean, so that was the excuse for a visit and a very comprehensive tasting. It was much too hot to spend any time in the vineyards, so we looked briefly at the damaged sunburnt grapes and then retreated to the cool of their cellar in Montpeyroux. Considering the damage, Pierre thought it was the result of the many walls, as well as stony vineyards, reflecting heat onto the young grapes.

2018 Nord Sud, Vin de France - 7.50€
An intriguing blend of Sauvignon, Marsanne, Roussanne and Grenache Gris. The Sauvignon comes from the Loire Valley and dominates the wine on the nose, with fresh pithy fruit.  And on the palate, there is good acidity with some fresh fruit.  You can taste the more northern influence.

For the moment, the appellation of Terrasses du Larzac is only red, but white is under discussion, with a quite a broad possibility of grape varieties, Roussanne, Marsanne, Vermentino, Bourboulenc, Grenache Blanc, Chenin Blanc, Viognier, Terret Blanc, Clairette Blanche and Carignan Blanc.  Of these Jean deems Chenin Blanc to be the most complicated, and he does not grow any.  They have, however, planted Carignan Noir,

Chardonnay, Vin de France – 8.00€
Vin de France, as the wine comes from vineyards in the Camargue, the Hérault, the Gard and the Bouches-du- Rhône, so from two regions, Occitanie and PACA, or Provence-Alpes-Côte d’Azur.
Lightly buttery on the nose, and again buttery on the palate.  An easy to drink, fresh Chardonnay.  Élevage in vat, with a few staves and some copeaux, or chips.  This is a négociant wine, and the aim is a wine that are easy to drink, with a consistency of style.

2015 Mas Cascal, Il faut qu’il se fasse, IGP Vaucluse - 40.00€
The first vintage of this wine was 2000, and each year Jean gives the wine a different name, that reflects his mood and his life at the time.  It comes from a tiny vineyard, just 25 ares, 11 rows, at the foot of the Mont Ventoux.  The blend is mainly Roussanne, with some Grenache Blanc, Viognier, Vermentino and Muscat à petits grains, all picked together and co-fermented.  Although there is more Roussanne, it does not like the sun and is less productive than the other varieties.  And Jean would like to plant more Grenache. As for the Muscat, that gets eaten by the wild boar, so does not really feature in the blend.  The wine is rounded and textured, elegantly ripe, with good length.  I really liked the mouthfeel.

Le Cascal, Vin sous voile, Vin de France – 20.00€
This is a blend of several vintages, with the flavours developing under flor.  It has great concentration, dry honey and a firm bite, with a fresh finish.    Jean enthused about rancio wines; he did a stage in Banyuls. 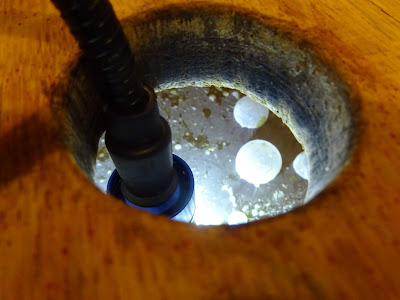 Rosé, IGP Oc – 7.50€
A blend of Grenache, Syrah and unusually some Nielluccio, which is grown in the Gard.  Direct pressing.  Pretty, delicate colour. Quite rounded, with some raspberry fruit on nose and palate. Nicely vinous.

2018 Sud Sud – 7.50€
Merlot dominant with some Grenache and Syrah.  Good colour.  Quite ripe and rounded, with some dry cassis.   The aim here is Bordeaux with a Mediterranean accent, which sort of works, but as Jean knows, and teases me for it, I have severe reservations about Merlot in the Midi.  It Is so often a touch jammy.

2018 Le Perdreau de l’Année, Vin de France
A blend of Syrah, Marselan and Merlot from just one grower in the Rhône Valley, in the northern Drôme, near the appellation of St Joseph. Sturdier nose and palate than the previous wine.  Quite fleshy and ripe, with a streak of supple tannin.  A Mediterranean note and a fresh finish.

Following its two parents, Marselan has the colour of Cabernet and the alcohol of Grenache; and is less susceptible to coulure than Grenache.  And Jean explained a finer point of French vocabulary that a perdreau is not yet a perdrix, so a young partridge, or someone who is still a little naïve.   Jean observed that a négociant activity allows you some creativity.   He is now working more extensively in the Rhône Valley, after taking over two oenology laboratories, which gave him some very good clients in the area.

Then we went on to the wines from Mas des Quernes itself, produced around the village of Montpeyroux.  Jean works extensively in the Terrasses du Larzac as a consultant oenologist so knows the area well. 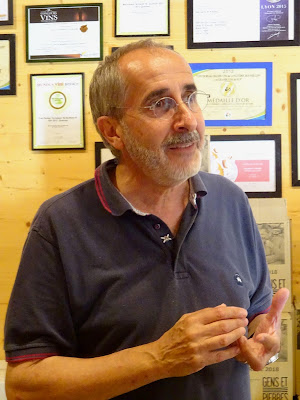 2017 Les Petits Travers, AOP Languedoc – 13.00€
A blend of Cinsault, Syrah, Grenache and Mourvèdre.  A touch of reduction on the nose, but nothing that a good aeration did not remove.  Élevage in vat.  Rounded ripe fruit. Quite croquant, or crunch, from the Cinsault.  Nice balance and a fresh finish.

2018 Le Blaireau, IGP Hérault – 10.00€
A pure Carignan.  Maceration carbonic, with a small amount of classic vinification, just for three or four days.  Bottled early.  Quite firm, fresh red fruit on the nose.  Good balance. There was what I call elegant rusticity in the wine, with a côté sauvage, simply confirming my enthusiasm for Carignan.

2017 Les Ruches, Terrasses du Larzac – 15.00€
A blend of Carignan, Mourvèdre and Grenache, with a tiny amount of Syrah from young vines.  Vines have to be five years old to be included in the Terrasses du Larzac.    No wood; fermented in stainless steel or cement vats.  Quite rounded.   More body and weight than the pure Carignan.  Quite sturdy, with good spicy fruit. 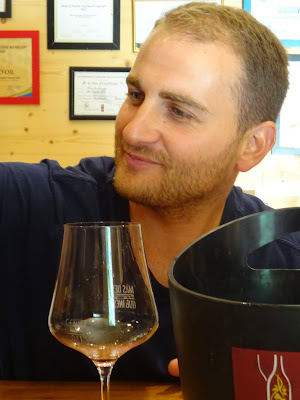 2017 Mourvèdre Armand, IGP St Guilhem le Désert – 18€
90% Mourvèdre, with 5% each of Syrah and Merlot.   Jean observed that he loves blending – ‘it’s a puzzle’.  Quite a firm nose, quite ripe, with a touch of oak, from 12 months in wood, in the small barrels in the cellar where we were tasting. Quite a ripe, sturdy palate, with some acidity as well as tannin.  A balanced finish.

2017 Villa Romaine, Terrasses du Larzac – 25€
40% each of Carignan and Mourvèdre, with 20% Grenache.  Sélection parcellaire.  Twelve months élevage in barrel, that were anything from new to five years old.  A deep colour.  Quite a ripe, rounded, spicy nose, with some oak influence.  And on the palate some fresh fruit and youthful tannins.  It needs time and Jean described it as a ‘Super Ruches’ - see two wines back.   A fresh finish, typical of the Terrasses du Larzac.

We talked about coopers; Jean favours Burgundian coopers, such Dargaud et Jaegle. François Frères are the most Bordelais of the Burgundian coopers.  Valorine is the subsidiary of Dargaud etJaegle at Romanèche-Thorins in the Drôme, where they have a parc de séchage, for seasoning the oak.

2015 le Querne, IGP St Guilhem le Désert – 42€
This is not made every year; there is no 2014 or 2016. This vintage is Merlot dominant, with some Syrah and Grenache, aged in oak for 12 months.  It is very cassis on the nose, with fresh fruit, firm tannins, and fresh cassis.   Ripe and rounded, with good balance, especially for a Merlot…. 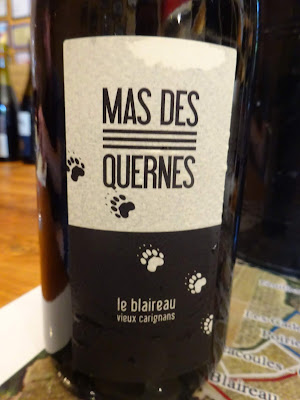 2018 le Querne, or rather just one component of the future blend, the Syrah.
Quite solid and concentrated. Ripe cassis spice; new wood, concentration and some acidity.   This was a vinification intégrale, a fermentation in small barrels – it is difficult to control the temperature. Pigeage is done by foot.  There was oak on the nose and fresh fruit, with quite firm tannins.   It will be a large part of the final blend of 2018 le Querne.  And it was a grand finale to a very comprehensive tasting.

And then we adjourned to the village restaurant Le Terrasse du Mimosa and sat in the shade of the planes trees.  Jean, of course, could not resist opening more bottles.  2016 les Ruches was nicely rounded with ripe fruit and a fresh finish. Next came 2017 le Querne, Terrasses du Larzac, with lots of Grenache and 20% Mourvèdre and 10% Carignan.  70% is the maximum for any one grape variety in the Terrasses du Larzac.  It was a youthful balance of oak and tannin and Midi spice.

And by way of a finale there was a bonne bouche, an unusual dessert wine, 2016 Vendange Tardive, Carignan with 15.5° and 80 gm/l residual sugar, with no added alcohol.  12 months élevage in vat. It was ripe with rich cherry liqueur fruit and a refreshing tannin steak.  Medium weight.  Jean made just 400 50cl bottles – 18€