Only mad dogs and Englishmen go out in the midday sun……. and that is just what we did some days ago.   It felt as though the annual Terrasses du Larzac walk was taking place on one of the hottest days of the year.   Little did we know that there was hotter to come.  We had decided to start walking at 4.30 p.m., when the heat was still at its peak, in preference to finishing the walk in the dark, and needing a torch to light the route.    It was a sharp contrast from the previous Terrasses du Larzac walk that I did, in the hills around St Saturnin, when we had not taken enough wooly jerseys, and suffered from the chill rather than heatstroke…….  This year the walk started at the historic priory of St Michel de Grandmont, up in the hills above Lodève.    And one of the key features of the walk was the stunning scenery, the Languedoc at its finest. 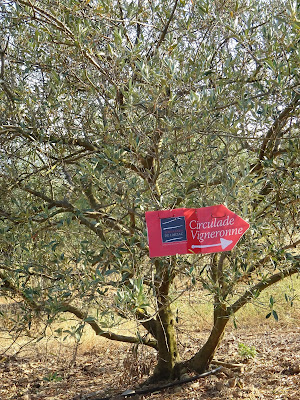 Altogether there were 58 wines to taste; I think I managed about half, as tasting conditions were quite challenging.  But the organisers were brilliant in that the first thing you were offered at each étape was a glass of water, and there was a copious supply of ice so that even the red wines tasted fresh.    Shade was usually, but not always on offer.   And we took the nine kilometres gently; fortunately the gradients were not too challenging. 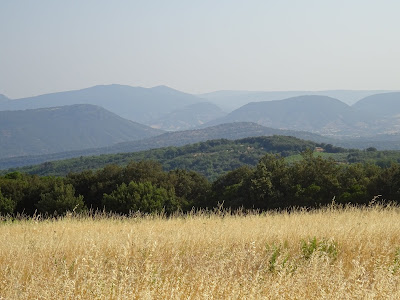 The course I liked best was the very first, the amuse-bouche of a ravioli of beetroot, with brousse de brebis and orange vinegar.   Here there were more white and rosés to taste than reds - the appellation Terrasses du Larzac is only red, so the other colours are IGP or Languedoc.   Domaine Nova Solis was a new name to me, with a rosé, L’Aube, a blend of Syrah and Grenache, with some rounded raspberry fruit.  Romain Benet’s first vintage was as recent as 2017.  Domaine les Caizergues, with English owners (though absent that particular afternoon) was a blend of Vermentino. Grenache and Marsanne.  The wine was ripe and rounded, with white blossom.   The 2016 Clairette du Languedoc from Domaine la Croix Chaptal was rounded, with good mouthfeel and a hint of honey - this grape variety deserves a revival in its reputation.  The vineyards of the Terrasses du Larzac are cooler than much of the rest of the Languedoc and that should show in the wines. 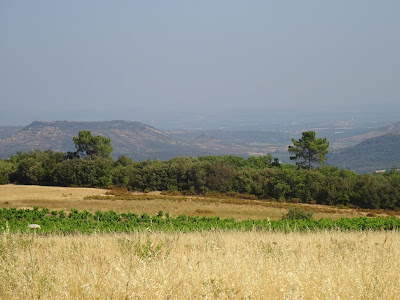 At the second stage, we enjoyed an escabèche of rouget, with a fresh chichoumeille.   Clos Maia was showing the 2017 white, a blend of Grenache Gris, Chenin,  Roussanne and a little Terret, with lovely acidity and hints of fennel.   Mas Haut Buis, les Carlines 2017 is a blend of Grenache, Carignan and Syrah, with good structure and fresh red fruit.   Domaine des Olivèdes from the hills around St. Jean de Buèges was ripe and spicy.     And the view from this étape was particularly stunning, but meh photographs could not attempt to do it justice. 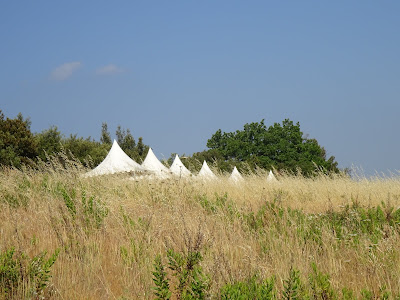 A hot entrée of some shredded duck, efflouché de canard, was accompanied by red wines.  Les Chemins de Carabote was ripe and concentrated; la Sauvageonne Grand Vin was rounded and spicy.  Le Clos Rouge, mainly from Carignan, with some Grenache and Syrah, had some fresh fruit.  Jean-Baptiste Granier was pouring les Vignes Oubliées, with perfumed fruit and a streak of tannin.   And one of the pioneers of the Terrasses du Larzac, Mas Jullien was represented by Les Etats d’Ame, a fresh and elegant blend of Syrah and Carignan. 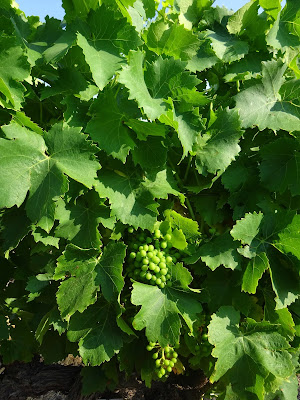 I gave up eating at the next étape; beef on a hot summer’s day didn’t do it for me.  However for wine there was Domaine de Montcalmès, with rounded textured fruit, a blend of Syrah, Grenache  and Mourvèdre.  Beatrice Fillon from Clos du Serres was pouring Sainte Pauline, with rounded fruit from Syrah, Cinsaut and Carignan.  Vincent and Isabelle Gourmard from Mas Cal Demoura were showing 2016 les Combariolles, with all five grape varieties of the appellation, with fresh fruit and elegance.  But they were somewhat downcast, having been badly affected by the extreme heat at the end of June and many of their grapes have suffered from sunburn.   Xavier Peyraud was showing his 2017 Mas des Brousses with fresh fruit and balancing tannins.  Anne-Laure Sicard, one of the new wine growers based in St Jean de la Blaquière, was offering Mas Lasta 2017, with fresh fruit and dry spice. 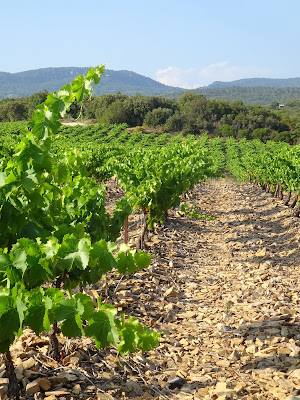 And the walk finished in the courtyard of the priory, with the cheese course at one end and pudding at the other.  Reserve d’O 2017 was quite perfumed with a firm tannic streak; Mas Cap d’Aniel in Gignac was another new name, with les Vendanges de Tom 2017, which was quite solidly oaky,   And Gavin Crisfield’s la Traversée 2017 was deliciously perfumed, with an elegant streak of tannin. 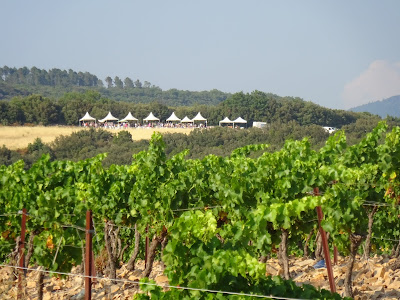 The finale was Charles-Walter Pacaud’s Clairette du Languedoc Rancio 2011, from Domaine la Croix-Chaptal, which was deliciously concentrated and mature and just the thing with a roasted apricot. 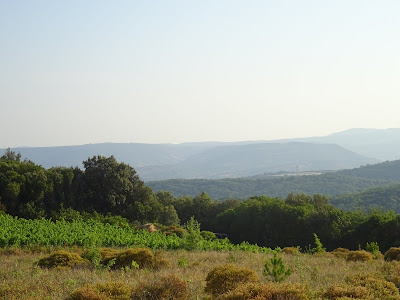 And then we headed for our car, passing the open doors of the priory church.  The lines are simple and the stained glass windows a brilliant blue.   It was a  fitting finale to the balade, apart from getting taking the wrong route to our car, and finding ourselves confronted by a large goose on guard duty - it would certainly not fit into any normal sized oven -   and it was taking taking its responsibilities very seriously.  We turned round and found the correct path back to the carpark. 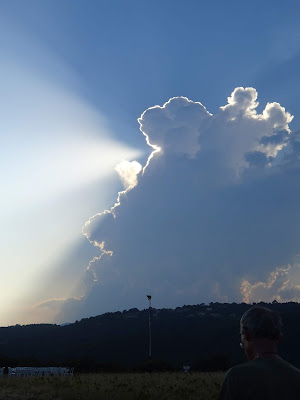