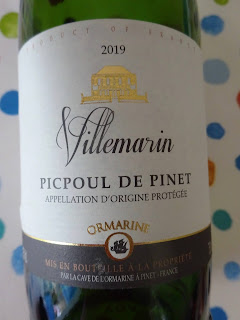 One of my favourite Languedoc moments is lunch on the water front at Bouzigues, at Le Grand Bleu.  If you have a table upstairs, you are able to look out on the oyster beds of the étang de Thau, while you eat oysters or mussels that probably came of out of the étang that morning or the previous day.   And you are sipping the perfect accompaniment, the fresh dry, white wine, that is Picpoul de Pinet.  All is right with the world, the sun is shining, the water is sparkling in the sunlight, and the wine is delicious, with a lemony saline note to compliment the oyster.

Picpoul de Pinet has enjoyed an enormous surge in popularity in recent years.  Gérard Bertrand even suggested that it was the Pinot Gris of the Languedoc!  There is hardly a restaurant wine list in London that does not include it.   People now order Picpoul de Pinet much in the same way as they order Chablis or Côtes du Rhône, paying scant attention to the wine grower’s name.  They know that the quality is reliable and the flavours enjoyable.  Yet not so long ago Picpoul de Pinet was in the doldrums.

The original history of Picpoul de Pinet is based on the vermouth, notably Noilly Prat which is produced in nearby Marseillan.  Piquepoul, as the grape name should be spelt, was once a relatively common grape, grown all over the south of France but was gradually abandoned, only to remain around the étang de Thau, but principally for the vermouth trade. Terret Blanc was more popular for its bigger berries and resistance to disease and by the early 1970s there was very little Piquepoul left.    But with the development of the seaside resorts and the tourist trade in the 1970s, its fortunes began to revive.  As Guy Bascou, of Domaine Condamine l’Evêque, who was until recently the very articulate president of the syndicat of Picpoul de Pinet, put it, ‘there was an explosion in technology’, particularly for white wine, with more gentle pressing, cool fermentations and the prevention of oxidation, all aspects of wine making that we take for granted these days.   Also, Piquepoul has a considerable advantage in the Mediterranean climate; it retains its acidity.

The export market for Picpoul de Pinet is currently very buoyant, with the United Kingdom the biggest customer.  Joël Julien, the very able director of the cooperative of Pomerols, talked about the success of Picpoul.  When he arrived at the cooperative in 2009, there was no demand at all for Picpoul and they did not know how to sell it.  But they were lucky, they found a solid partner in London, the wine shippers, Liberty Wines, and then in 2010 they began supplying the supermarket, Tesco’s for their Finest label, for which the turning point was winning the accolade of Best White Wine of the Languedoc in the annual Top 100 tasting competition. This gave an enormous boost to Picpoul de Pinet, establishing its reputation, and helped pave the way to the establishment of the appellation.  Picpoul de Pinet was recognised as an appellation in its own right, without any supporting mention of Languedoc on the label, in 2013.

The delimited appellation of Picpoul de Pinet covers 2400 hectares of which about 1500 hectares are actually planted with Piquepoul, covering six villages, Pinet, Pomerols, Montagnac, Florensac, Mèze and Castelnau de Guers.  It seems that the délimitation parcellaire, determining exactly which vineyards were to be included, was quite problematic, with vineyards being eliminated that merited inclusion or indeed vice versa.   Vineyards that are not Picpoul de Pinet are classified as IGP Côtes de Thau, and most wine growers make both.

So what determines the appellation?  The altitude is low with vineyards barely above sea level on gently rolling land rather than completely flat plains.   The climate is influenced by the proximity to the sea, with vineyards generally facing east looking towards the Bassin de Thau for the sea breezes.  Rainfall is a significant factor in the summer; the southern part of the appellation below the motorway and the Via Domitia is more exposed to drought than the northern part.  The soil is predominantly limestone, with some sandy deposits.

Cyril Payon, the bright director of the Pinet cooperative, is very aware of the success of Picpoul de Pinet, and also of its possibly precarious position.   He attributes its success to a series of circumstances; Muscadet in decline; people getting bored with Pinot Grigio; the excitement of a new appellation with an appealing identity and a very good rapport qualité- prix, as the French say so succinctly.  Back in 2000 they produced 14,000 hectolitres of Picpoul de Pinet, which were difficult to sell.  They now make 33,000 hectolitres, which they have no problem in selling, mostly in bottle, of which a third goes to the United Kingdom, but what will be the effect of Brexit?

Taste in their caveau and you will immediate become aware of the diversity of Picpoul de Pinet.  Carte Noire is fresh and lemony with good acidity. Duc de Morny comes from riper grapes and older vines.  A Picpoul sur lies amply illustrates the benefit of bâtonnage with a selection of better vineyards and lower yields, making for some firm mineral flavours.  L’Effet Mer is a blend of Duc de Morny and Picpoul sur lies, combining the best of both.  Esprit Libre was an experiment in 2016, using no sulphur, which received mixed reactions as the colour was very golden and the flavour quite unlike traditional Picpoul.   A sparkling wine, Méthode Traditionnelle, was remarkably successful with fresh salty fruit, and some years they make a late harvest wine.

A few days ago I was sent a bottle of  2019 Villemarin from the Pinet coop.  You can also find their wines under the name of L'Ormarine.  Villemarin is a special label for Majestic and everything that classic Picpoul should be.   It has a light colour, with a firm, dry nose and palate, with the salty notes of sea, and some tight acidity, all making a deliciously refreshing glass of wine on a summer’s evening.  The only thing that was missing was the view of the oyster beds at Bouzigues.

Bob Rossi said…
I've been drinking Picpoul de Pinet for a number of years. Before the Maine shrimp season got cancelled a few years ago due to low numbers, we used to drink Picpoul once or twice a week with the shrimp during the short winter Maine shrimp season. For many years, the only Picpoul available here was one from the Cave in Pomerols. Now there are many more.
About 10 years ago we spent a couple of days in Sete, and had dinner one night there and lunch 2 times on the water in Meze. With eack meal we had different Picpoul de Pinets. Very very enjoyable.
8 September 2020 at 14:52

Rosemary George MW said…
This comment has been removed by the author.
8 September 2020 at 16:50

Rosemary George MW said…
Picpoul and shrimp sounds delicious. what a pity the festival is no longer.
12 September 2020 at 06:38

ishikasingh said…
Not all people are able to use beautiful words in life, there are some people who can translate the words of their mind into words, you are the only one of them, you have written this post in a beautiful way.
independent call girls in gurugram
call girl agency
escorts service gurgaon
Call girl gurugram
9 October 2020 at 13:31

Surbhi Rana said…
f Mahipalpur. We are energetic inviting you to our office and anticipating hear you unique longing and need that you are investigating the city all through the official visit or individual visit to go to occasions or extraordinary work to do.
view more :-
aerocity escorts
18 October 2020 at 10:32

Female Escort Service in Gugaon said…
Gurgaon Escort Agency welcomes you. We provide escort service to all the public and we have all kinds of girls' stores and all of you can fulfill your wishes by contacting us on our website. Female Escort Service In Gurgaon
20 December 2020 at 06:39

Escort Service In Delhi said…
Escort girls in Delhi make independent Brahma; Delhi call girls are always ready to serve you for interested people. Call girls in Delhi have been placed in many categories. Surely we are available according to you, you can come on our website and contact us. Delhi Escort Service
8 March 2021 at 08:37

Escort Service In Delhi said…
Escort girls in Delhi make independent Brahma; Delhi call girls are always ready to serve you for interested people. Call girls in Delhi have been placed in many categories. Surely we are available according to you, you can come on our website and contact us. Delhi Escort Service
17 March 2021 at 08:20