Mas Lou in Faugères - an update. . 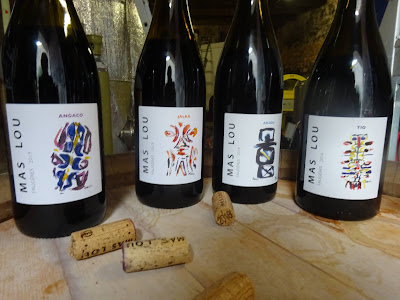 I spent a happy hour, one morning in late September tasting Oliver and Adèle’s current vintages in their little village cellar in the heart of Faugères. They now have eight hectares of vines. They had finished picking, and the wines had mostly finished fermenting, but were still sur marc, on the skins, for a three-week maceration.  However, there had been a cold snap a couple of days earlier, and Olivier was concerned to keep the wines warm, at 25°C.  As Adèle put it, they have put their winter coats on, in other words, an insulating cover.   If the temperature drops too low, it makes for bitter flavours. 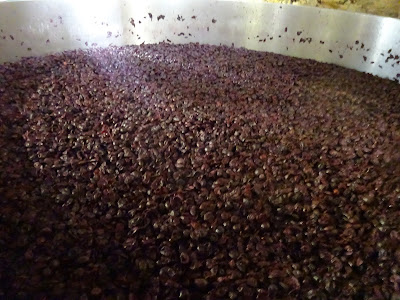 This year they started the harvest at the end of August, with the Viognie for their white Côtes de Thongue.   For Faugères itself they started on 7th September, a little earlier than usual, and had finished by 18th.  On 2019, they were still picking on 9th October.  This year everything was ripe all at once, and they also hurried as the weather forecast had announced a downpour, that never came in the end.  The quantity is satisfactory and the quality very good. 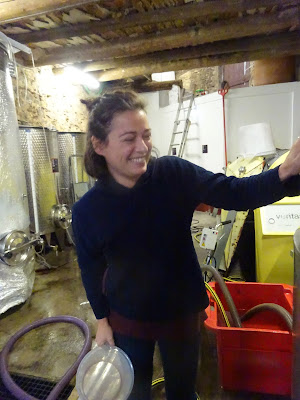 The other problem this year was the wild boar.  They were thirsty and consumed about 70% of one plot of Mourvèdre, and also a large amount of Syrah.  You can install electric fences but they are expensive and not always 100% effective.  it is best to work with your neighbours and fence larger plots, but you have to do that quite early in the season, and that can cause problems with using tractors.

60% Carignan, with some Grenache and Lledoner Pelut, all aged in vat. Medium colour; fresh cherry nose, from the Grenache, with some firm tannins from the Carignan.  Some lovely fruit and an elegant balance.

This was a new cuvée for me, based on 70% Cinsault, grown at 400 metres, with some Grenache.  They are kept in vat and blended in March just before bottling.  It was quite delicious. Cinsault is my current enthusiasm.  A light bright colour.  Very fresh red fruit on the nose - the Cinsault makes for very appealing perfume. Delicately fragrant palate with lovely fresh fruit.

Adele explained that it is a micro-cuvée, they make just 10 hls, or 1500 bottles, from one small plot of 40 ares. All their cuvée names have a link with their time in South America.  Jalka are the Bolivian women who weave the local materials, which are illustrated on their labels.

Mainly Syrah, grown in a vineyard at around 250 - 300 metres, with some Grenache and Carignan, kept in vat, while the small amount of pressed juice is put in an old barrel, to round it out with some micro-oxygenation.   Adèle described it as their cuvée référence for schist. The nose was quite rich with black fruit and a hint of tapenade.  Fresh peppery fruit on the palate.  Medium weight.

Mainly from Syrah, 90%, with some Grenache and Carignan, with an élevage in wood, including a little new oak.  2016 was a very hot year, with some drought and a small yield.   The oak immediately adds a different register of flavour and the wine is quite firm and structured with some underlying fruit. It should age well.  Though Adèle said: on cherche.  They are not sure that they have got it right yet; they are wondering about giving up on oak, and maybe trying a terracotta amphora.  They think that people like oak less than they used to, especially with the other possibilities available for élevage. Concrete vats are so good for both fermentation and élevage. 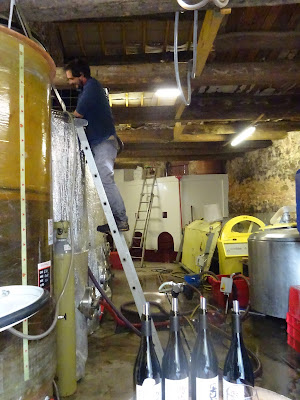 Their next project is a new cellar, outside Roquessels.  They hope to get planning permission early next year; the village mayor is supportive.  Their cellar in Faugères is simply too impractical.  Getting a bottling machine to them is well-nigh impossible and they have nowhere to store any wine, which precludes an impromptu purchase if somebody stops to taste.

Their 2019 Côtes de Thongue, Ïnti, a pure Viognier, was all sold out and the 2020 will be kept in a for the next six months.

I liked the way that their labels say jeunes vignerons.  Adèle explained that you are allowed to use that term until you are 35.  They still have a few years to go! 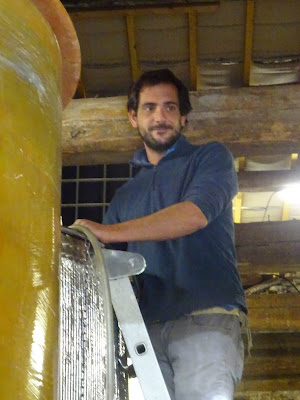