Tasting at the Abbaye de Valmagne 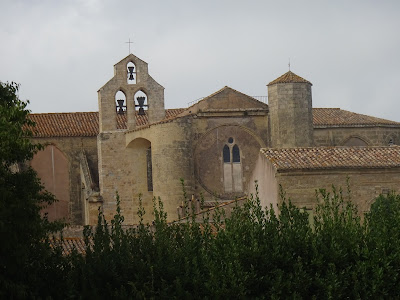 It has been twenty years since my last cellar visit to the wonderful abbey of Valmagne, when I met Diane d’Allaines, and her son Philippe, while researching The Wines of the South of France.  Philippe has now retired and his son Roland has taken over the winemaking, so it was time for a well overdue update.

2018 was Roland’s first complete vintage at Valmagne when he worked the whole annual cycle.  He studied agriculture and then business studies and then travelled to broaden his horizons, working in Bordeaux, and in Chile, and for a wine distributor in Paris. He returned to Valmagne with projects, notably to convert the vineyards, which have been organic since 1999, to biodynamic viticulture.  We talked about the two key preparations, namely 500-P which is based on cow dung matured in a cow horn buried in the ground, and sprayed twice a year in the vineyard.  500-1 is based on quartz and sprayed onto the leaves; the aim is to enhance the effect of the sun on the vines.  However, it must be done properly or it can burn the vines.

Roland now has 30 hectares in production.  Originally it was 57 hectares, but he has pulled up the less than satisfactory varieties such as Cabernet Sauvignon and Cabernet Franc.   He would love to plant olive trees in their place.   For his white wine, he has Viognier, Roussanne and Grenache Blanc and he has planted Grenache Gris and Grenache Blanc, using massal selection rather than a clonal selection.  Massal selection is more expensive, 3€ per vine, but the results are better.  For red wine, Roland has Syrah, Mourvèdre, Grenache and Cinsault, and one hectare of Carignan planted in 1948, and another planted in 2019.  There is also some Morastel which his father planted 20 years ago, but it is very susceptible to mildew.

Roland explained that there are three different soils.  There is some richer, deeper and more fertile soil, which provides the grapes for their entry level wine, Vitrail sur l’Abbaye.   Then there are limestone coteaux or hillsides, and then behind the abbey some very poor pink sandstone.  Sandstone makes for lighter tannins, whereas clay gives more power.  On 19th September, they still had about 10% left to pick, namely Carignan and Mourvèdre.  Virtually all the vineyards are machine-harvested, as machines are so much more efficient these days. 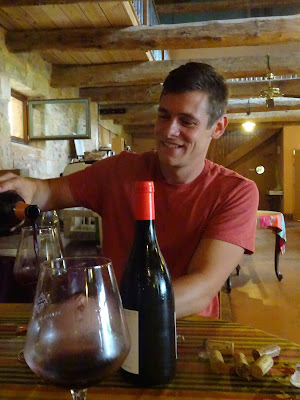 We tasted through the range:

A blend of 60% Viognier, 30% Grenache Blanc and 10% Chardonnay, fermented with natural yeast and kept in a stainless steel vat.   Blended in December and bottled in February.   They buy organically grown Chardonnay from a nearby wine grower.    Light colour.  Lightly floral with a hint of peach. Elegant finish, what the French call a joli amertume, an attractive bitterness.

A blend of 80% Roussanne and 20% Grenache, fermented in vat with a little bâtonnage.  Grown on limestone.  A little colour.  Quite fragrant wine; neither too heavy nor too sunny and very elegant.   Roland explained that they do two tries through the vineyard, picking the Roussanne first at 11.9° for acidity and then at 13° for fruit, and then blend the two.  A blend of minerality and southern aromas, very elegant and nicely crafted.  We later enjoyed it for lunch in the abbey restaurant

A blend of 80% Roussanne grown sandstone with 20% Grenache Blanc from the coteaux, fermented in oak, with six months ageing.   Roland uses neutral barrels, and is also trying a terracotta amphora from Spain.  Last year he bought a demi-muid.  A little colour.  Some integrated oak on the nose. Quite a firm structured palate, with some firm acidity and even a touch of tannin.  It should develop with some bottle age.  Roland admitted to an enthusiasm for Burgundy, and Puligny Montrachet in particular.

Saigné after 8 to 12 hours.  A blend of Syrah, Grenache and Mourvèdre. Quite rounded with some depth, some weight and some complexity.  For Roland, a rosé de saigné portrays the terroir better than a rosé from pressed grapes.  This was certainly a more serious wine with some depth and mouthfeel. 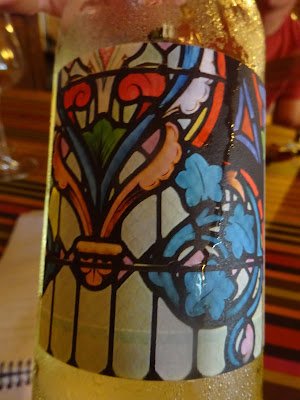 They do make a red Vitrail sur l’Abbaye, but the 2018 was sold out and they had only bottled the 2019 the previous day.

A blend of 60% Syrah with 30% Grenache and 10% Mourvèdre.  All fermented and kept in stainless steel vats. Blended in December and then bottled 12 months later.  The maceration can last between five days and two weeks; ça depend!  Deep colour.  Rounded red fruit with some spice and on the palate a tannic streak.  Medium weight.  Nicely balanced.   Youthful fresh finish, with some ageing potential.

A blend of Syrah and Grenache with a little Morastel and Mourvèdre.   Aged in barrels of three or four wines for 12 months.  A deep colour.  A richer nose. and on the palate rounded ripe fruit, with some depth.  Black fruit and well integrated tannins.  It doesn’t taste as though it has 14° alcohol.  Roland enthused about Mourvèdre.  They are not too far from the sea at Valmagne, so he does get the sea influence in his vineyards, with a temperate climate.  Roland blended this wine, but did not ferment it.

This wine was made by Philippe, rather than Roland.  Deep colour.  Quite a firm nose and palate, with some fruit underneath, but the oak is still quite dominant.  Quite structured.

I quizzed Rolland about changes he has made.  For the wine making, he thought, less extractions.  He dampens the cap of grapes for two or three minutes rather than doing remontages.  He is working with natural yeast and in the vineyard on biodynamics and massal selection.  A flock of sheep spend February to April into vineyards.  You sense that Rolland is very enthusiastic about his vineyards; that is where he feels most at home.

The wine names all convey a sense of the family history.  It was the Count of Turenne who bought Valmagne in 1838 and it has been in the hands of the family ever since.  Suzanne de Nicolaÿ was his granddaughter, who married the Marquis de Nicolaÿ. and she is the great-grandmother of Roland’s grandmother Diane, and mother of Jean-Baptiste Portals built the cellar in 1920, applying the principal of gravity to his wine-making.   Cardinal Pierre de Bonzi was governor of the Languedoc under Louis XIV and Valmagne was his main place of residence; he turned the abbey into a home.  Two new plots of vines pick up the names of the new generation, L’Enclos de Ninon, after Ninon, Roland’s daughter, and Le Petit Moine for Oliver, his nephew, whose father is English and very aptly with the surname of Monk.  Each child has a plot of massal selection vines from which Roland has yet to make wine. then We then repaired to the Auberge de l’Abbaye for a very convivial lunch. 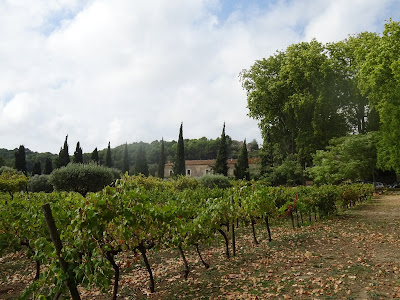 Guy p said…
Hi again Rosemary. The Abbaye is one of our favourite show-off locations for friends who visit while we're in Saint Chinian. An amazing place, and I still have a 2006 Cardinal de Bonzi I'm planning to open this Christmas with friends from Cognac. I'm not sure how they're supposed to age but fingers crossed. A Bientot, Guy
18 November 2020 at 07:11