Frost in the Languedoc 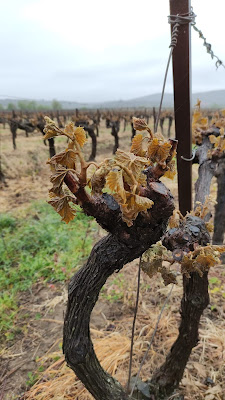 A photograph of a frosted vine, taken by my friend James Riley near Faugeres.    The vegetation was already quite advanced and is now limp and brown.

Frost is one of the regular viticultural hazards of Chablis, and something they are fairly used to dealing with, and well prepared with heaters and spray systems.  But the Languedoc is quite different.   You do not expect frost in the south of France, but last week, on the night of 7th/8thApril the temperature plummeted to as low as -8°C.   And the consequences have been devastating.   Nobody really has the means to do anything to protect the vines – bonfires, but what else.  They were helpless.    And like all climatic disasters, the impact was very erratic.   Some were spared and others devastated.   Cold air tends to settle in hollows and those would be the vines most affected.  There was a heart-rendering you Tube video of a young vigneronne looking at her vineyards in tears ……It is much too early to assess the full extent of the damage, partly as the danger of frost is by no means over, but conservative estimates suggest a 50% loss of production over the Languedoc.

I sent a round robin email to some of my wine-making friends in the Languedoc and also Roussillon; some have replied and some have not.

In Limoux Caryl Panman from Château Rives-Blanques, after observing that it is absolute devastation from the Costières de Nimes to Roussillon, from Montpellier to Limoux, with everyone they know affected some degree or other, said they had nothing.   She can’t quite believe it and is enormously grateful.  The rest of Limoux suffered quite badly, apart from the high vineyards, like theirs.   And freezing temperatures are forecast again this week.

In Faugères Françoise Ollier from Domaine Ollier Taillefer in the village of Fos said that there was relatively little damage in Fos, but that the vineyards between Fos and the neighbouring village of Roquessels had been badly affected, with anything between 40 to 100% damage.   Simon of Domaine des Trinités, who is based in Roquessels says: I’m afraid it‘s rather grim news from Roquessels, big losses with some more frost due tonight (13thApril).  I estimate at least 60% down for now but will know the full extent of the damage by end of next week.

Of course, it is much too early to assess the damage properly but nonetheless you still have an idea.  I have once seen a frosted vineyard, not in Chablis, but in the Languedoc, when they had an exceptional spring frost in April 2017.   Like this year, the vegetation was well advanced and we were out walking and suddenly came across a small vineyard that was the most disturbing colour.  The leaves were no longer a bright fresh green, but had turned a dull limp green with tinges of brown.  And the penny dropped.  This was frost damage and it is horrible to see.

Still in Faugères, Olivier and Adèle at Mas Lou said rather philosophically that they had suffered, but not as badly as some who have lost everything.  And Catherine Roque at Mas d’Alezon reckons to have lost between 20 – 30% of her crop so for her the situation is not catastrophique.  Nor is it for her daughter Alix at Domaine du Clovallon on the other side of the hills at Bédarieux.

Domaine Caujolle-Gazet in the village of Lauroux, so one of the highest and most northern part of the Languedoc just below the Pas de l’Escalette sent a map that showed the extent of the frost damage all over the Hérault.  My technical skills are not sufficient to reproduce it in this blog, but amongst other things it shows that some of the northern vineyards such as theirs, are relatively unscathed.  They consider themselves very lucky.

But Beatrice and Sebastien Fillon in the nearby village of St Jean de Blaquière in the Terrasses du Larzac have been much less fortunate.   They reckon they have lost the crop of 12 out of their 15 hectares.  'A calamity'.

From the Minervois, at Clos Centeilles in the cru of La Liviniere, Patrica Domergue replied : Thank God, we were spared, but the danger is not over yet.

John Bojonowski from Clos du Gravillas at St Jean de Minervois sent me quite a detailed report, describing his neighbours’ vineyards as well as his own, as follows

'I spent a couple of days not looking, but finally went out Friday night to see all our vineyards.  Our St Jean de Minervois Gimios vineyards, at 300M seem to be untouched.  I didn't go see the Muscat but the apprentice said it was just fine... perhaps I should take a look.   At Cazelles, most is ok; just the plantier of Grenache gris has 15% frosted (mostly the youngest baby plants from last year, which were still very short and close to the ground).  But our new Carignan Blanc is 90% gone. It's the lowest altitude and nearest to Agel.  Downhill from there, well at our neighbours' vineyards it's really all downhill.  All is lost.  Pretty ugly.  Similar view driving through Assigning, at least half gone.  And on the Barroubio side of the plateau it is much nastier than chez nous. And even our nearest Gimios neighbours, 300M away, are pretty slammed.  Mystery of nature'.

It is indeed a mystery of nature.   Deborah Core at Mas Gabriel in Caux observed how one vine can be affected, but not the neighbouring vine, or even the shoot on one branch of a vine, and not the adjacent branch of a bush vine.   She says: ‘The frost damage is mostly at our vineyard at St Jean de Bébian where our Grenache Gris and young Carignan Blanc have been frosted almost 100%.  These were also badly affected in 2017. The Vermentino doesn’t seem as badly affected as most vines hadn’t got to bud burst, or are just opening out, so we will see.

At Caux on the slopes it generally a happier picture although one block of Carignan Noir has some damage, maybe 30%. In the plantiers, young vines which we cut right back down to 2 buds have also been burnt but should throw out another shoot. Otherwise, the rest of the Carignan (Noir and Blanc), Syrah and Grenache are ok.

So we count ourselves lucky not to have been more badly hit. Fingers crossed for no more frost or other catastrophes climatiques this year!’

Stéphane Monmousseau at nearby Grange des Bouys says he was lucky, as only about 30% of his white vineyard on a slope was affected.  So ‘not too serious for us.’

In contrast Françoise Boyer from Domaine la Croix Belle a little further west in the village of Puissalion in the Côtes de Thongue says they have never had such bad frost damage.  The vegetation was 15 days ahead, as the weather had been so warm earlier in the spring.   It is particularly their Chardonnay that has suffered, 100% she says.  Chardonnay does have an early bud break.   Nor they do not have any insurance.   And Anne Germa de Sutra, at Domaine Monplézy, just outside Pézenas, reckons  she has lost 50% of her crop.

I have received an email from the Orliac family of Domaine de l'Hortus in Pic St Loup.  They reckon 80% damage, both red and white varieties.   The problem was that the vegetation was so far advanced after some unseasonably warm weather.   They will have fall back on their negate wines to tide them over.

Roussillon in contrast does not appear to have fared too badly.   Daniel Laffite at Mas des Soulanes outside Maury, says he was lucky.  Just one plot is 40% damaged, and the rest of his vines have been spared, so far.

And Frédérique Vaquer in the village of Tresserre reassured me that Les Aspres had been spared, 'thank goodness, after the mildew of 2020 and the drought of 2019'.

Elsewhere in Roussillon, I gather from Nicolas Raffy at Mas Amiel that there is some damage in their vineyards and also around Tautavel and Latour-de-France.   And Emilio Perez, the Argentinian winemaker at Domaine de la Rectorie said that Banyuls had been spared.

I have not yet had replies to all my emails, so I will add to this post as and when anything more comes through. 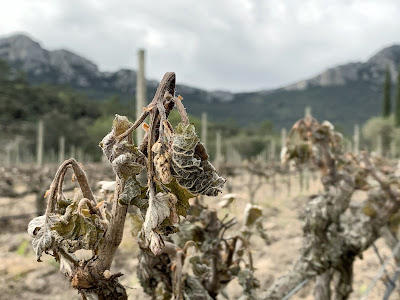 A photo from Domaine de l'Hortus in Pic St Loup.   So distressing to see.

Ken Scupp said…
Dear Rosemary- So sad to hear of this devastating frost so far south. You quote so many of the vineyards and vignerons whom we know personally. Very tragic. Please keep your readers "au courant" as this story unfolds. Hopefully, we can travel back to the Languedoc very soon. Bon courage to all. Best regards, Ken and Joséphine Scupp, Middlebury VT USA
17 April 2021 at 13:00