The Maison de la Region Occitanie organised a tasting the other day, which they called Real People Real Tasting, as the wine growers were there in person, something that has not happened for a long time.   Occitanie now covers a multitude of regions, not just the Languedoc and Roussillon, so there were wines from the little-known appellation of Brulhois, a rather good Gaillac estate, Domaine Gayrard, with a delicious Braucol, as well as a handful of Languedoc producers, and a lone Roussillon wine grower, François Jaubert of Domaine F. Jaubert.   His Vieux Rivesaltes was my bonne bouche at the end of the tasting.

The most interesting Languedoc producer was Domaine la Louvière in the appellation of Malepère, where the talented Australian wine maker, Jem Harris, runs the estate for its absentee owners, the Grohe family.   Jem is left pretty much to his own devices and produces a varied and original range of wines, both Pays d’Oc and Malepère.

A pure Sauvignon blanc.  The wine has spent three months on the lees.   A rounded, ripe Sauvignon nose with good varietal character, contrasting with surprisingly high acidity on the palate, but with the benchmark fresh pithiness of understated Sauvignon.   The acidity will tone down with a little bottle age.  It just seemed quite surprising for a southern Sauvignon.

An unusual blend of 60% Viognier, with 20% each of Chardonnay and Chenin Blanc.  A third of the blend has spent three months in 400 litre barrels which fills out the palate a little.   Not surprisingly the Viognier dominates the flavours, but not aggressively so.  There is a rounded peachy nose, balanced with some pithy fruit and satisfying texture and mouthfeel on the palate.

A pure Chardonnay, that has been fermented and then aged in 400 litres barrels for nine months.  This is nicely crafted, with a rounded nose, and on the palate a satisfying leesy bite with a touch of oak.  The oak is well integrated, and there is some refreshing acidity so that the wine still tastes very young, with some possible evolution in bottle.

Just one hour’s maceration on the skins before pressing.  60% Cabernet Franc, with 20% each of Merlot and Malbec.   Pale orange colour, with light raspberry fruit on the nose and palate.   A fresh dry finish.

A blend of 60% Merlot with 20% each of Cabernet Franc and Malbec.  The wine spends a year in 400 litre barrels, including 10% of new barrels with the others one to five years old.   Medium young colour.  The ripe cassis leaps out of the glass, with ripe rounded fruit on both nose and palate.  Intense blackcurrants on the palate, but balanced by a firm streak of tannin.   The oak is very nicely integrated.  A very good example of the most bordelais of the appellations of the Languedoc, for this is the one Languedoc appellation that can be made solely from bordelais grape varieties and where the growing conditions are so much cooler than the rest of the region.

60% Merlot with 20% each of Cabernet Franc and Malbec.  The wine is fermented in barrel before 18 months ageing in new oak.  Good colour.  Rounded cassis fruit on the nose, tempered by the period of ageing in oak, so not quite as opulent as the previous wine, and more structured on the palate.  The oak is well integrated with balanced fruit and satisfying weight and mouthfeel.

I quizzed Jem as to how his wine making methods had changed since his arrival at Domaine La Louviere in 2014. He observed that he had pulled back on the tannins, so that the wine spent less times on the skins, with less extraction.  And he favoured 400 litre barrels as opposed to the 225 bordelais barriques.   The estate has been certified organic for its red wines since 2014 and was certified for its white wines in 2021.   Apparently, you can do one without the other.    The labels for Domaine la Louviere are quite unlike any other, featuring wolves in fancy dress, for the name Louviere has associations with wolves.  They certainly stand out on a shelf. 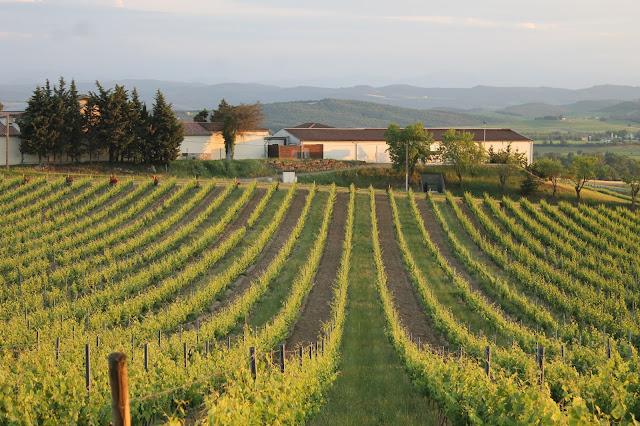