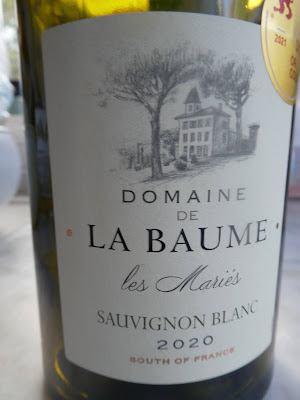 I have been aware of les Grands Chais de France gradually buying up some of the significant estates in the Languedoc, but had never had the opportunity to taste their wines until I was invited to a tasting in early October.  I was quite surprised to discover their range, covering not just about every region of France, but also other European countries and other continents.  It was potentially overwhelming, so I contented myself concentrating on the Languedoc, and spent a happy hour or so chatting and tasting with their technical director, the bright and sympathique Florence Delabre.  Each wine estate is run individually, with Florence overseeing the overall wine-making.

A 60-hectare estate in the village of Colombiers near Béziers.  Never previously on my radar.

The colour was just that, gris, delicate and pale and the flavour light and fresh with a crisp finish.

A blend of Grenache and Syrah.  This was eminently easy-drinking, with some fresh spicy fruit and a touch of tannin. No great depth, but nicely undemanding.

I remember first visiting Domaine de la Baume, situated between Béziers and Pézenas, sometime in the mid 1990s, when Nigel Sneyd was the winemaker, and his Sauvignon was ground breaking.   Unfortunately, they did not have any Sauvignon to taste on the day, but they very kindly sent me a bottle later.  And very good it was too.

Light colour.  Good pithy fruit on the nose and on the palate, lovely ripe Sauvignon fruit, with balancing acidity.  Good varietal character, but with subtlety, if Sauvignon can be subtle.  Good weight and texture and nicely understated Sauvignon fruit.   As good as I remembered it from my earlier visit.

The range at Domaine de la Baume now includes several varietal wines.  I began with Viognier which was nicely rounded and not too confected. There was a delicate Pinot Noir rosé.  I am not usually excited by bordelais grape varieties in the Languedoc, but both the Merlot and Cabernet Sauvignon were convincing examples of the variety.  The Syrah was firm and peppery.

Languedoc Pézenas 2016 Vieilles Vignes, for which the Carignan and Grenache components come from  80 years old vines, and blended with some Syrah, had some quite obvious oak, as did the 2017 Languedoc Pézenas, with a high proportion of Syrah, with some Grenache.

This property, off the road between Pézenas and Roujan, heading north, on undulating hills was previously owned by AXA but was sold in 2015.   The range has been modified.  There was a Grenache Blanc, Pays d’Oc which was fresh and delicate, with a little weight on the palate.  Grenache Blanc les Coteaux includes a touch of Clairette and has the benefit of site selection and also some barrel fermentation.  The oak was nicely restrained and the palate textured with a good balance of fruit and weight.  A very satisfying glass of wine.  Petit Verdot was a successful example of what can be a tricky grape variety as a mono-cépage, combining ripe cassis fruit and soft tannins.    I can say that I enjoyed these wines more than previous tastings of Mas Belles-Eaux.

Château Arcade is a property in the Minervois, in the village of Laure-Minervois, that I have not encountered before.  The red wine is a blend of Syrah, Grenache and Carignan for an appellation Languedoc. There was dry spice on the nose, and more richness on the palate.  Refreshingly unoaked.

This is a Limoux property, situated in the village of Ste Hilaire.  Again, an estate that was new to me.  A Chardonnay Mauzac AOP Limoux was lightly buttery on the nose and palate – Limoux must be aged in oak – and on the palate the wine had good acidity, with satisfyingly balanced texture and mouthfeel.

The red Limoux was a blend of Syrah, Merlot and Cabernet Sauvignon, with spice and cassis.  The palate was quite firm and ripe, with a rounded finish.

2019 Château Fournas, Corbières Sans Sulphites.  From an estate in the village of Fabrezan, and a blend of Syrah, with some Carignan and Grenache.   The vinification is traditional, with destemmed grapes and a 24-hour cold maceration before fermentation, which takes about ten to fifteen days, with some pumping over and some délestages.  And there is no élevage, so that the wine is bottled while it is still very young.   It is a lovely glass of wine, with elegantly fresh red fruit on the nose and palate, with some peppery notes.  But I was not sure that I would necessarily recognise it as Corbières, for which I would expect more weight on the palate.

Domaine de Tholomiès is another Minervois property.  The Pays d’Oc Chardonnay was elegantly oaky with a satisfying leesy finish.  And the Pays d’Oc Cabernet Sauvignon showed good varietal character.  I liked the 2020 Minervois, from Syrah and Grenache, with fresh spicy fruit, for easy drinking.  Minervois la Livinière from 75% Syrah, with Grenache and Carignan is aged in wood and was redolent of tapenade and oak.  It is still very young, but I found the oak un peu too much.

Next came Domaine du Joncas in Montpeyroux.  I was very keen to taste this estate as I have enjoyed the wines in the past when it was owned by Pascal Dalier, who sold to Grands Chais in 2019.   The blends of Pascal’s original wines have been slightly modified.

Neblà, from 75% Syrah with 15% Grenache and 10% Cinsualt, was fuller and richer with more concentration, but with the freshness of the Terrasses du Larzac on the finish.  I was not disappointed.

This is another estate that I enjoyed visiting when it was the property of Rémi Duchemin, who had previously made Pic St Loup at Mas Mortiès.  2018 Khi is a pure Carignan, with medium colour and firm red fruit and a touch of tannin.   A satisfying example of a pure Carignan.  Nice mouthfeel and texture.

2019 Habilis, Terrasses du Larzac is a blend of one third each of Grenache, Syrah and Carignan, aged in 10 hls. foudres.  Medium colour with some firm structured spicy fruit on the nose and palate, and the underlying freshness, that you expect with the Terrasses du Larzac.

2019 Sapiens is a blend, mainly of Syrah, with some Grenache and Carignan, aged in 500 litre barrels.  The palate is quite peppery with a touch of oak, and satisfying weight and texture.  Again, I was not disappointed by the change in ownership.

Next came sparkling Limoux from Salasar, which was bought from Vignobles Bonfils five years ago. The Crémant de Limoux is a pure Chardonnay and quite soft and rounded, but I was not convinced by the Blanquette de Limoux which seemed rather sherbety without any obvious Mauzac characteristics.

Picpoul de Pinet, from Domaine de la Serre, an estate that was unknown to me, was quite firm, with a pleasing salty note on the finish.

And the final wine was Domaine Ste Anne 2019, a Fitou, made in conjunction with the Mont Tauch cooperative in the village of Tuchan.  There was some firm peppery spice on the nose and the palate was quite peppery and tight knit.

And it would have been fun to finish with Domaine Tailhades, their Muscat de St Jean-de- Minervois, but sadly there was none to be tasted.