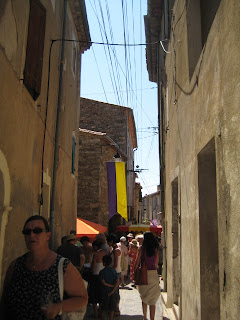 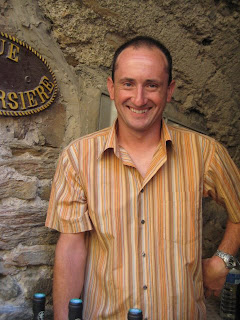 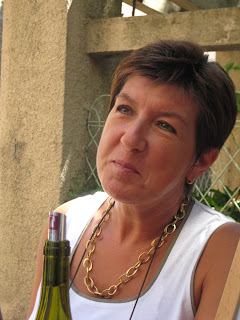 Faugères is usually a rather sleepy little village, with little to disturb its peace, but not on the morning of the annual wine fair. The narrow street that runs through the centre of the village is filled with up-ended barrels, each with a vigneron eager to offer you wine to taste. OK – the tasting conditions are not ideal. It’s the middle of July and the thermometer is climbing steadily, and not everyone has thought to bring an ice box with them. Spittoons are not always in evidence either, and as well as keen tasters, there are pushchairs and dogs, as well as members of the local wine confrerie progressing in their heavy robes and velvet hats, accompanied by a fanfare of music, not to mention some ‘maidens’ sporting white tunics and leafy wreaths round their heads, serenading the crowds. The purists might also complain that the fête has been diluted by other distractions; for not only are there regional products, cheeses, pâtés and olive oil to buy, but you can also succumb to African jewellery and even teddy bears. A vigeronne friend muttered that the mayor of Faugères fails to realise just how important wine is to the reputation of the village. Indeed without wine, Faugères would have no international recognition at all.

But treat the fête as an opportunity for a discovery or two, and you may be well rewarded. I was. First stop was LES FUSIONELS, a new name to me. And indeed a new producer, with a first vintage in 2007. The name illustrates the context – what happens when a girl from Champagne meets a guy from Adelaide. They look for somewhere to make wine and Faugères is the answer, and a fusion of New World and Old World.

2007 Le Rêve, a blend of 75% Grenache, 20% Syrah and 5% Carignan. Immediately spicey nose and palate, with ripe fruit, smokey notes and a touch of leather. Medium weight and very drinkable. And great with a barbecue later that evening.

2007 Intemporelle. This is more serious. From equal parts Mourvèdre, Syrah and Grenache, all aged in old wood, but the oak is beautifully integrated, giving more weight and substance to the wine, but without overwhelming the fruit.

Further up the street, FREDERIC ALQUIER , brother of the better known Jean-Michel, was manning a stand. His white wine is a blend of Marsanne and Roussanne. The 2007 is quite delicate on the nose, with some rounded fruit on the palate. He was badly hit by hail the week before the harvest last year, and didn’t make any white wine at all in 2008.

His Tradition 2006, a blend of equal parts of Syrah, Grenache, Carignan and Mourvedre, is rounded with some furry tannins, while his haute de gamme, a selection of better plot, is rather solidly oaky. I have to admit that I do prefer his brother’s wines, but they were not to be tasted at the fete.

Across the street was a selection of wines from DOMAINE DE REYNARDIERE , which lacked fruit and depth, so I moved on quickly to MAS D’ALEZON . Catherine Roque’s eager stagiaire, Simon, was offering the 2008, which has just been bottled. It was still rather adolescent and the blend of 80 per cent Grenache with 15% Syrah and just 5% Mourvedre needs to settle down. The 2007 was beginning to show its quality, but again needs time. These are definitely wines to age with some firm structure.


Next stop was Geneviève Libes-Costes at DOMAINE DU METEORE . This estate in Cabrerolles is aptly named, taking its name from a meteor crater outside the village, at the bottom of which they have 70 ares of vines.

2008 Faugères blanc A blend of Roussanne and Marsanne, with some delicate herbal notes on nose and palate and a streak of fresh acidity. Very appealing.

2008 rosé Quite a solid rounded rosé with good fruit and a fresh finish.

And next came a range of reds:

2006 Les Léonides from equal parts of Grenache, Syrah, Mourvèdre and Carignan. A firm nose, with sturdy mineral fruit. Quite a robust finish. 5.70€

2005 les Perséides – 60% Syrah and 40% Mourvèdre with eighteen months ageing in oak, 90 per cent of rich is new. Solid rounded oak on the nose, with a substantial full-bodied palate. The oak is very obvious on the palate, but there is plenty of fruit underneath to support it. The wine just needs time and will amply reward patience. 11.50€

2006 Les Lyrides. A new wine made for the first time in 2006. Virtually pure Syrah – Faugères should not be a single variety - with 22 months ageing in new wood. This is serious, solid rounded dense, with elegant tannins and ripe fruit. It promises very well and could take Faugères to new heights. 19.00€

2008 St. Chinian. Clos de Bijou. This is new too. They have taken their St. Chinian vines out of the cooperative, and the style is quite different to Faugères, with fresh fruit and ripe spicy flavours. In comparison Faugères has much more structure. It is rare for a wine grower to have both St. Chinian and Faugères; the other exception is Moulin de Cifre whose vineyards astride the boundary of the two appellations. 7.80€

Note to self – go back and taste at the cellar. So watch this space for further developments.

DOMAINE DE CHENAIE is another estate whose wines I had not tasted for sometime. Two brothers, Cyril and Eric run it. Today it was Eric offering their wines for tasting. We began with the white Faugères, 2008 Conviction, a Roussanne Rolle blend, with some firm spicey fruit and good acidity, with a slightly bitter finish, characteristic of Roussanne. Nicely mouthfilling.
Next came a white Coteaux du Languedoc 2006, a blend of Roussanne, Viognier and Rolle, which was fermented in oak so that it was lightly oaky on both nose and palate, with a textured palate, and a hint of peachy honey from the Viognier.

2008 rosé Conviction, made from Cinsaut, Grenache and Syrah had delicate fruit, with attractive herbal notes and good acidity. A lovely refreshing glass of rosé.

2006 red Conviction, from Syrah, Mourvèdre, Grenache and Carignan in equal part was ripe and rounded, with some lovely spice and ripe fruit. Very supple and appealing.

2005 Les Ceps d’Emile, named after their grandfather, comes mainly from the 80 year old Carignan vines that he planted, with a little Syrah. It is firm and structured, with mineral fruit and a touch of oak.

2003 Loblivia comes mainly from Mourvedre and is a wine to forget about. ‘Il faut l’oublier’ – hence the name. It is solid, dense and ripe, with shoulders, as the French say, and definitely need time.

Tasting stamina was beginning to fade by this point, so the wines of M. Saur at the Château de Haut-Fabrègues did not get the attention they might deserve. And the wines of Domaine Ollier-Taillefer deserve a separate posting too.
Email Post