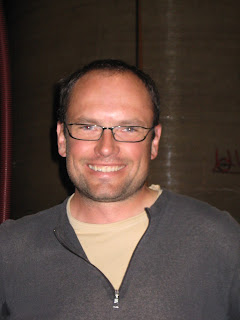 One of the great things about visiting wine estates in the Languedoc is the new, and sometimes unexpected. A friend had said: do go and see Le Clos du Serres, so I did – at St. Jean de Blaquière, in the hinterland of the Languedoc just below the plateau of the Larzac.

New estates and new producers abound in the Languedoc these days. What is fascinating is how people arrived there. Sébastien Fillon studied chemistry and worked in computers but soon realised that was not for him. So he returned to college, this time for viticulture and oenology, and after a brief spell working in the Beaujolais, he realised that he wanted vines of his own. So he and his wife Béatrice started looking, anywhere, provided it was south of Valence and their search took them from Vinsobres in the southern Rhône down to Banyuls close to the Spanish border. Their criteria were quite simple; they had to really like the wine of the area; it had to be a good quality area, and somewhere they would enjoy living, so not too isolated. And of course it had to be feasible economically. That ruled out Châteauneuf-du-Pape for a start, as vineyard prices there are now extortionate. And in 2006 it led them to St. Jean de Blaquière in one of the up-and-coming sub-zones of the Coteaux du Languedoc, the Terrasses du Larzac, which includes all the vineyards below the Larzac plateau, stretching from the village of Octon to beyond St. Saturnin and Montpeyroux. The soil is quite varied, but the area is linked by the excellent diurnal exchange of cool nights and warm days during the weeks before the harvest. The difference can be as much as 15ºC - 20ºC and the grapes love it.

Altogether Sébastien has twelve hectares in fifteen different plots, planted with Carignan. Grenache, Syrah and Cinsaut, but no Mourvèdre, as that does not do so well further from the sea. He also planted some white varieties last year – a bit of mixture in a quest to find out what will work best – namely Roussanne, Vermentino, Viognier, Chenin Blanc, Grenache Blanc, and he is also considering some Grenache Gris and Carignan blanc. 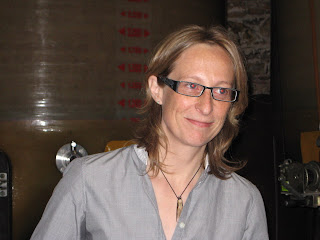 His small cellar is in a back street in the village – we arranged to meet in the village café in the main square, as he doubted our ability to find our way through the maze of narrow alleys. However, he is planning a new cellar outside the village. And this is what we tasted.

2008 Le Clos, Coteaux du Languedoc – 7.00€
Cinsaut is the base, with 25 per cent of Syrah and Grenache, as well as 10 per cent Carignan. Sébastien explained how his old Cinsaut vines include some Oeillade. This is one of the almost lost vines of the Languedoc, which is closely related to Cinsaut, but can be trickier to handle in both cellar and vineyard, and consequently has tended to disappear. However, vinified separately, it can be more complex and peppery. These days it is impossible to buy it from a nursery; you have to take cuttings from somebody else’s vineyard. Fortunately Sébastien is not alone in his enthusiasm for Oeillade; others in the region are also helping in its revival.
With Le Clos, Sébastien explained that he was looking for the ‘gourmand’, an adjective that best describes sheer drinkability and pleasure. It is very ripe with fruits noirs, mainly black cherries, with a rounded palate, with tannin and acidity, and that hallmark freshness of the Larzac terraces. There was an attractive peppery note on the finish

2007 Les Maros, Terrasses du Larzac – 11.00€
The base is Grenache, as much as 80 per cent, with some Syrah and Carignan. It is mostly aged in vat, with just four barrels contributing to the blend. Sébastien commented that he is learning about wood ageing; you have to treat it like salt and pepper and never overdo it. The fruit is wonderfully exuberant, ripe Grenache, with a streak of tannin and the characteristic freshness on the finish.
2008 La Blaca, Terrasses du Larzac – 11.00€

Blaca is the Occitan word for a white oak, the classic oak, as opposed to the green oak of the Mediterranean, which is its limit at St. Jean de Blaquière. This is virtually all Syrah, with a splash of Grenache, and again mostly aged in vat. There is some lovely peppery fruit, with an elegant structure and good length.

2007 Première Audace Vin de Pays de l’Hérault. – 20€
It could have been under the more precise delimitation of Vin de Pays du Mont Baudile but Sébastien explained that he prefers the broader denomination of the Hérault, as he is proud of his department. The wine is a wonderful example of the renaissance of Carignan. Again the élevage is in vat; the fermentation is classic, no carbonic maceration here, and the flavour is ripe and rounded with elegant tannins. Carignan illustrates its terroir; here it is supple with a tannic streak and some spice and a hint of prunes.

The name begs the question, what will your next audace be? Maybe a white wine. What is in no doubt is Sébastien and Beatrice’s commitment and enthusiasm for their adopted part of the Languedoc. ‘We are writing the history of the Terraces du Larzac’
.
Email Post

Le Couvent - www.roujan.com said…
Great post, Rosemary. I am really enjoying reading about these wonderful domaines and their interesting owners. Keep it up eh?

Much love from sunny Roujan