A WALK ROUND THE TERRASSES DE LARZAC 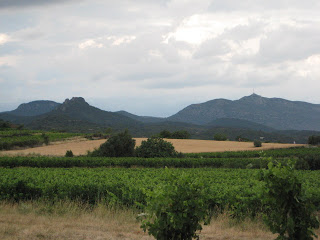 During the summer months various appellations organise walks through the vineyard, accompanied by wine and food. You may be forgiven for thinking that one will not help the other, but it works remarkably well as a formula. The walk is usually not too long, nor too taxing, about five or six kilometres, and every kilometre or so, there is a refreshment stop, with several wines to taste as well as something to eat. Last year we did the Pic St. Loup walk; this year it was the turn of the Terrasses du Larzac.

This is a large area, stretching from Octon and the lac de Salagou, on past Montpeyroux and St. Saturnin, towards the Pic St. Loup. Currently it is part of the Coteaux du Languedoc, recognised as a cru in 2004, but has aspirations to a separate appellation. The soil is quite varied, but there is a unifying factor, the cooler climate with a big diurnal exchange of night and daytime temperatures, determined by the plateau of the Larzac.

The walk was an opportunity for some 39 wine growers to get together to show off their wines. It makes for a great tasting opportunity, admittedly not in ideal conditions, but there is a great atmosphere of conviviality with an opportunity to meet some of the wine growers. And the food is taken seriously too.

This year’s walk started at St. Felix de Lodez. We met at the village cooperative and were issued with tasting list, sunhat, glass and cutlery. We had already been thoughtfully supplied with a breathalyser at the car park. A bus service was provided to take us to the start of the walk, thereby avoiding what would have been a tedious trail along a tarmac road. The walk began with a sharp ascent up to 300 metres to the Chemin des Crêtes, where an amuse-bouche of red mullet brandade awaited us. 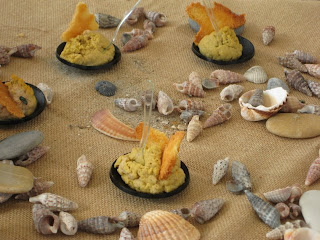 Tasting highlights here were:
Domaine de Granoupiac 2008 Coteaux du Languedoc Blanc Le Chant des Cigales which seemed appropriate for a summer’s day. It is a blend of Rolle (or Vermentino) with Grenache Blanc and Roussanne, with some delicate fruit on the nose, and some lemony herbal fruit on the palate.
Mas Fabregous 2008 Le rosé de Juliette Mainly Grenache with a touch of Syrah, with some fresh fruit and good acidity. I forgot to ask Philippe Gros who Juliette is.

Domaine des Tremières 2007 Longueur de Temps, which is a blend of two thirds Grenache to one third Syrah, and quite delicious served chilled, with some ripe spicy fruit.

The path took us along the Chemin de Crêtes, with views towards Montpeyroux and St Saturnin, with dark clouds threatening on the hills across the valley. The next course was a vegetable concoction; described as a barbacane, whatever that may be. Sébastien Fillon from Le Clos du Serres was showing his 2007 Les Maros with some lovely, supple, supple fruit.

2007 Domaine Sauvageonne Pica Broca, also from the village of St. Jean de la Blaquière, where Gavin Cresfield is making some finely crafted wines. This is rich and spicy, with lovely supple fruit, redolent of the herbs and warmth of the Languedoc garrigues.

The storm clouds looked even more threatening, so we elected to take the shorter route down to the church on the edge of the village of St. Guiraud. Here we were given a tarte forestière, with a small piece of roast lamb.

And the vinous highlights at this étape included:
2006 Domaine de Montcalmès A blend of Syrah, Grenache and Mourvèdre, with youthful peppery fruit. This was really infanticide as the wine will be so much more satisfying in a year or three after some bottle age.

2007 Mas Conscience L’As This is a spicy blend of Syrah and Grenache, with a streak of tannin. Again it promises well for future drinking.

2007 Domaine du Pas de l’Escalette les Clapas from some of the most northern vineyards of the Languedoc, above Lodève. A blend of Grenache, Carignan, Syrah and Cinsaut, with a good tannin structure and the hallmark of fresh red fruit. The route took us through St. Guiraud, past one of the good tables of the area, Le Mimosa, but we resisted the temptation to read the menu, and then on to another meat course, which was the highlight of the meal, a simply delicious pork (or porcelet) tagine, with légumes oubliés, honey and sweet spices. To accompany it, Guilhem Dardé was showing his 2006 Mas des Chimères, a blend of the five red varieties of the south, namely Carignan, Cinsaut, Mourvèdre, Syrah and Grenache, with some sturdy ripe fruit, which balanced the spice flavour of the tagine..
Mas Julien was on form with 2007 Etat d’Ame, with fresh fruit on the nose, and a nicely structured palate, with a firm streak of minerality.

And then came two new producers (to me)– Capitelles des Salles 2007 Hommage. This is another new estate in St. Jean de la Blaquière, and the wine had some deliciously fresh fruit, with a spicy palate, and a supple finish. A blend of Grenache and Syrah.

Les Chemins de Carabotte produced its first wines in 2005 and was showing its top wine of three reds which had spent eighteen months in oak. It was ripe, with some rich fruit, underlying the still quite obvious oak. A bit of time is needed here.

The rain clouds were still obligingly keeping their distance, despite our misgivings and the path took us back to St. Felix for nuggets of local goats cheese. There were some white wines to go with it, but I preferred the reds on offer – all new estates to me. Yet another from St. Jean de la Blaquière, Mas Plan de l’Oum was showing a 2007 red Paysage, mainly from Carignan with just 15 per cent Syrah. It had firm minerality, with a touch of spice. Domaine les Souls, with vineyards in Pegairolles was mainly Syrah, with 10 per cent Mourvèdre and 20 per cent Grenache, making for a solid rounded wine, with quite dense oak. And Domaine du Causse d’Arboras, with vineyards at 300 metres, above the village of Arboras, was showing 2006 Les Cazes, from Grenache Noir, with some Syrah and Carignan, and some élevage in wood. Despite the oak ageing, it had a refreshing fruitiness and freshness and was quite the best accompaniment to the cheese.

For the finale, we wandered through the village backstreets to another square, for pudding, a cake flavoured with rosemary and accompanied by apricot compote, and a small selection of dessert wines. The best of these came from Domaine des Crès-Ricards. Their Oenothera d’automne is a late harvest Marsellan, with some spice and fruitcake flavours, not unlike a lighter Rivesaltes. It was a delicious and original finish to the evening.

Unknown said…
Thanks, Rosemary, really enjoyed reading your account and re-living the walk and flavours.

Jim's Loire said…
Rosemary. Good to see you on the blogosphere, especially with one dedicated to the Languedoc.
1 August 2009 at 16:20

Jamie Goode said…
I echo Jim's sentiments. Look forward to some good content - I love the Languedoc, and Pic St Loup was one of my first wine passions.
1 August 2009 at 23:51

Graham said…
Such a comprehensive commentary, thank you. We had this balade pencilled in months ago (amazingly would have been our first of its type), but sadly had just returned to the UK.
Agree that several of the reds needed a year or two more bottle age.
Found this blog (in French) that has some more pictures of the event.
2 August 2009 at 08:37

bob alberta said…
Great to hear about this site.