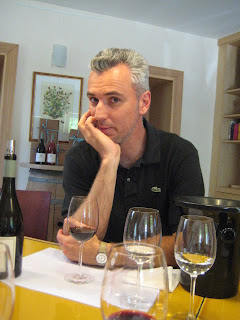 We are regular customers at Domaine de Nizas for their Vieux Carignan, which for me is one of the best examples of the grape variety. It goes so well with our local butchers’ sausages on the barbecue. So a quick visit to replenish the reserves was a good opportunity for a catch up with Arnaud Deville who runs the estate for its American owners.

2007 Vieux Carignan, Vin de Pays de Caux – 11.80€
It has that benchmark rustic berry fruit, with an edge of acidity and tannin and a rounded finish. The vines are 60 years old, with a low yield, 35 hl/ha, and the grapes are mainly vinified by carbonic maceration which brings out the fruit in Carignan so effectively. However I was devastated to find out that 2009 will be the last vintage of Vieux Carignan and that in future wine from that vineyard will be included in the new cuvée of Pézenas.

So I consoled myself with a taste of Rosé, 2009 Languedoc – 8.00€
This is a blend of Syrah, Mourvèdre and Grenache. The first rule of rosé is that the colour should be pretty and enticing, and this is, a deliciously pretty pink. The palate is ripe and rounded, with some strawberry fruit, a creamy finish and a good mouth feel.

They take their rosé very seriously at Nizas; this is not a by-product of red wine. Most of the grapes are pressed rather than saigné, and then given six to twelve hours skin contact. And the grapes are intended specifically for rosé, so that work in the vineyard has been adapted accordingly. They are grown on lighter villefranchien soil, with larger yields than for red wine and a slightly earlier harvest. They aim for a lower alcohol level. And they have also experimented with yeast, but Arnaud is adamant that they do not want a technological wine, with the telltale aromas of bonbons anglais, from an excess of amylic acid.

And then we finished with 2006 Coteaux du Languedoc – 13.20€
This is a blend of Syrah, Mourvèdre and Grenache. The colour is deep and the nose solid and leathery, with fresh red fruit on the palate, some firm mineral notes and a lovely elegant finish.

In future, from the 2008 vintage, Domaine de Nizas will be producing the Languedoc cru of Pézenas, which is characterized by the minerality from the basalt soil. There is a large basalt quarry outside the village of Nizas. The blend will be one third each of Grenache, Mourvèdre and Carignan, with unusually, no Syrah. Part is being aged in tank and part in wood, and it will not be available for tasting until it is bottle in June 2010, for release at the end of 2011.

They are also planning an appellation white wine to replace their vin de pays that is a blend of Sauvignon, with a little Viognier and Vermentino. Roussanne and Marsanne are coming into production for the appellation wine, the Vermentino will be included, and the Viognier and Sauvignon are being pulled up.

Arnaud was philosophical about the cold winter; at the beginning of April the vegetation was two weeks late, but it must be catching up now, fast, with the arrival of spring and some warm sunshine. However they have had 330 mms of rain since the beginning of October, when the usual average rainfall for the year is 450- 500 mms.
Email Post