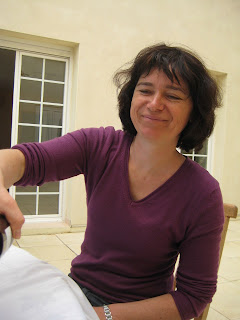 Picpoul de Pinet is a bit like Muscadet; when it is bad, it is dull and boring, but when it is vinified with talent and care, it is absolutely delicious. Such is the case at Domaine Félines-Jourdan, which is the largest private producer. Claude Jourdan explained that her family has a total of 110 hectares of vineyards, with Picpoul accounting for 45 of them. Her vineyards are situated in three specific terroirs, outside Mèze on the Etang de Thau, at Félines, where the vines are exposed to the sea breezes; outside Montagnac, where the terrain is quite hilly, and the soil red and stony, and near Pomerols, on a windy plateau.

Picpoul de Pinet is in line for its own appellation to separate it from the vast new appellation of Languedoc, but things are moving slowly. At Félines-Jourdan they also make Vin de Pays des Coteaux de Bessiles from varieties such as Chardonnay, Sauvignon, Syrah, Cabernet Sauvignon, Merlot and so on, as well as red and rosé appellation Languedoc.

There is a large modern cellar, equipped as you would expect with stainless steel vats and temperature control. Mme Jourdan makes just one Picpoul, rather than several different cuvées. It is a blend of Picpoul from all three vineyards. The 2009 Picpoul de Pinet – 5.50€ - has a salty, sappy tang on both nose and palate, with a certain weight on the palate. The grapes are picked later and riper than some, but she is adamant that Picpoul should always have freshness and acidity. With riper, fuller flavours, it doesn’t just go with oysters, from the nearby Etang de Thau, which is the classic combination, but will accompany other richer fish dishes. The fermentation is long and slow, taking about six weeks; the wine is left on the lees over the winter, but without any lees stirring, and prepared for bottling sometime at the beginning of the year.

I also tried a 2009 Roussanne, Languedoc – 6.50€ - which is blended with just 5% Picpoul, as you are not allowed a single grape variety for Languedoc AC. It was rounded and lightly peachy, with white flowers, and touch of exotic fruit, with a fresh finish on the palate, making a lovely example of the vast improvement in white wines from the Languedoc. 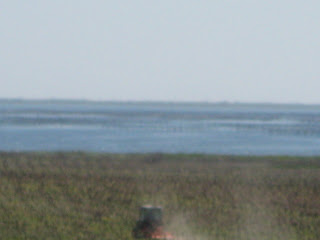