A VISIT TO DOMAINE CAZES IN RIVESALTES 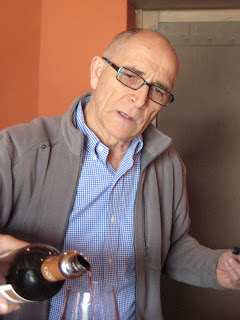 Bernard Cazes gave us a warm welcome. He is the third generation of his family to produce wine in Rivesaltes. His grandfather, Michel, planted the family’s very first vines – just 20 ares – back in 1895. His father Aimé, whose life spanned almost the whole of the 20th century, dying a few weeks off his 100th birthday at the end of 2000, acquired a further seven hectares in 1927. When Bernard joined the family business in 1970, following in the footsteps of his brother André, they owned 40 hectares of vineyards, as well as orchards of apricot trees. And today they have a total of 228 hectares, including 180 hectares in one enormous plot, making them the largest biodynamic producers in France.

The conversion to biodynamic viticulture began gradually in 1997. From the start Bernard was adamant that they had to change their methods for the entirety of their vineyards. If you believe in biodynamics, half measures are unacceptable. It was all or nothing. He talked of his father, who had known vineyard work with a horse, before the advent of tractor. He himself had enjoyed the comfort of chemistry but had also observed the damage it can cause, rendering the soil unfit for cultivation. And now the soils of their vineyards are full of life. The vineyards are impressive to see – the longest row measures 1.7 kilometres, which must be daunting when you are faced with rows of vines to prune or grapes to pick. Bernard expounded on the principles of biodynamics, referring to the three Rs – reason, rigour and respect. A plant produces a certain amount of grapes and you must be reasonable and not force that quantity. You must be rigorous in observing the biodynamic calendar, treating the vines as is necessary and at the appropriate moment. – ce qu’il faut, comme il faut, quand il faut. And finally you must respect the plant and its surroundings, including the bugs which will feed off other bugs, in the food chain. It is all a question of balance.

Domaine Cazes are located in the back streets of Rivesaltes. They have a welcoming tasting room and shop where Bernard showed us their current vintages.

2009 Le Canon du Maréchal rosé Vin de Pays des Côtes Catalanes 4.70€
A 50/50 blend of Syrah and Merlot. Bernard was emphatic; this is a vin de soif, a vin de plaisir. I couldn’t agree more. It was a delicate pink orange colour, from pressing the grapes, rather than any maceration, with some fresh fruit and herbal notes on the nose. The palate was full and rounded with a dry finish. The name le Canon du Maréchal refers to the fact that Rivesaltes was the birthplace of Maréchal Joffre – there is an imposing statue in the main square – and the Cazes family subsequently bought his property.

2009 Le Canon du Maréchal blanc. Vin de Pays des Côtes Catalanes – 4.70€
This is an appealing blend of Muscat, both d’Alexandrie and petits grains, with 20% Viognier. The Viognier adds more aromatic complexity to the Muscats and the wine is fresh and perfumed with honeyed peachy notes and a herbal hint. Just the thing to drink with asparagus, observed Bernard.

2008 Le Canon du Maréchal rouge, Vin de Pays des Côtes Catalanes – 4.70€
Also a blend of Merlot and Syrah. Medium depth in colour, and with rounded fruit on the nose and palate. It is lightly plummy and easy to drink.

2006 Ego, Côtes du Roussillon Villages – 7.50€
A blend of 40% Grenache Noir and Syrah with 20% Mourvèdre, aged in vat. Deep colour, with a firm leathery nose, with some rounded warming fruit and a dry finish on the palate.

2007 Ego Côtes du Roussillon Villages – 7.50€
This was a more difficult year, giving very small yields. You get some of the animal, viandé notes of the Mourvèdre, and maybe a touch of brett. It needs to breathe to develop its full potential.

2003 Alter, Côtes du Roussillon Villages – 11.00€
The blend is the same as for Ego, but the wine is aged in oak barrels, one third new, for twelve months. There are sweet tannins from the oak, and some dense fruit, which is characteristic of the warm vintage. It tastes younger than 2003.

2008 Notre Dames des Anges, Collioure – 14.00€.
This for a Collioure seemed ripe and easy, with red fruit, and eminently drinkable, rather than the sturdier flavours I tend to associate with Collioure. Bernard’s son Emmanuel manages the vineyards here, in association with their owners, and the profits from the wine are used to maintain the numerous stone walls and terraces that characterize the vineyard scenery of Collioure. Collioure is a work of art, affirmed Bernard.

2003 Credo, Vin de Pays de Côtes Catalanes
The first vintage of Credo was 1993, a blend of Cabernet Sauvignon and Merlot, representing a protest against the restrictive attitude of French bureaucracy and its application of the rules of the appellations. This 2003 was elegant and stylish, with smoky oak on nose and palate, and an attractive tannic edge on the finish.

2007 Credo, Côtes du Roussillon Villages – 36€
This is the new Credo, a blend of 30% each of Grenache Noir, Syrah and Mourvèdre, with 10% Carignan, so very much the grape varieties of the south. There is a selection not only of vineyard plots, but also of vines, and even bunches and individual berries. The wine is fermented in new 500 litres barriques, with hand plunging, and then spends another 18 months in more new barriques. This is a serious mouthful of wine. There is a touch of oak on the nose, with some attractive fruit, and much more oak on the palate, so that it currently masks the spice of the grapes. The youthful tannins are balanced by an elegant finish, and it all promises for the future. They make just 4000 bottles. 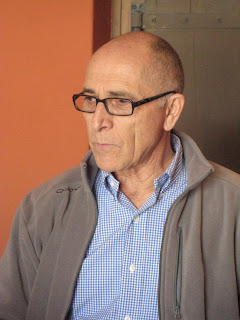 And then we moved onto the Vins Doux Naturels. These are the wines on which the Cazes family established their initial reputation, and until the end of the 1980s, accounted for two thirds of their production. These days the vins secs, as they call table wines in Roussillon, are more important.

1996 Rivesaltes Ambré – 15€
From Grenache Blanc, which has spent eight years in wood, in old barrels. This is the traditional apéro des grandes mères observed Bernard. He thought it would be better with dessert and explained that the key to matching vin doux with dessert is the colour. Choose a dessert of the same colour as the wine. So with this ambré, something like a crème caramel would be delicious. There were honeyed nutty notes on the palate, with hints of orange, and it was slightly sweet with a fresh finish.

2005 Rivesaltes Grenat – 9.90€
This is made from Grenache Noir, muté sur grains; the maceration with alcohol helps extract the maximum from the grapes, with the alcohol dissolving colour and tannins. This 2005 vintage was bottled in 2006, so that there is none of the oxidation that is traditional to vins doux, and the wine will continue to age in bottle. On the palate there is an explosion of red fruit, with ripe concentrated flavours. So working on the colour principle, this is the wine for a strawberry tart or a blackcurrant sorbet.

1990 Rivesaltes Tuilé – 19.00€
This also comes from Grenache Noir, vinified in the same way as the Grenat, but the difference is that it has spent twelve months in a vat, gradually softening and loosing its colour. Think tawny port, so it would go with blue cheeses, and it is also delicious with chocolate. It is rounded and nutty, beautifully elegant with a long lingering finish. Aged Rivesaltes is one of the great wines of the Midi, sadly underrated and ignored, and deserving of a revival. 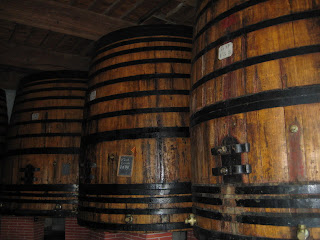 2006 Muscat de Rivesaltes. – 9.70€
A 50/50 blend of Muscat d’Alexandrie and Muscat à petits grains. The important thing here is to get the right balance, with neither too much alcohol nor sugar. The vinification process entails some skin contact and some maceration with alcohol after mutage. Usually Muscat de Rivesaltes is drunk when it is young and fresh, but there are exceptions to every rule; this is rich and honeyed, with more weight and body; there are notes of bitter oranges, and a rich finish, but it is not cloying or sugary.

1978 Cuvée Aimé Cazes – 68.00€
Named after Bernard’s father. It is a blend of 80% Grenache Blanc and 20% Grenache Noir, which has been aged in old foudres for 22 years. Grenache Blanc turns amber in colour after 22 years in wood, and the evaporation is such that 100 litres reduce to 30 litres, a rate of 7% per year, which is much greater than the angels’ share in Cognac. This is fabulous, with an elegantly dry walnutty nose, and long lingering nutty flavours on the palate. As Bernard observed: It’s the wine to drink by the fireside, with your favourite music and a purring cat.

1996 Muscat de Rivesaltes.
This was bottled in 1997 and is quite different from the classic Muscat de Rivesaltes. It has a light amber colour, and the flavours have turned to orange marmalade as they have evolved in bottle. There is no hint of oxidation, just intense bitter oranges, with some herbal notes and good acidity.

1991 Muscat de Rivesaltes.
Again aged in bottle. Bernard explained that Muscat will retain its fruit for the first seven or eight years, and then it closes up for two or three years, like a sulky adolescent, before opening up again, with more intense flavours, orange and treacle, with a certain unctuousness. It just slipped down the throat.

And then we adjourned to their recently opened restaurant, La Table d’Aimé where you can enjoy their wines with some creative cooking. This is the only restaurant of any note in Rivesaltes. And if you are looking for somewhere to stay, I can recommend a friendly chambres d’hôtes, L’Orangerie, 3 rue Ludovic Ville. Tel: 04 68 73 74 41 The bedrooms are quite individual in style, according to the name. We slept in the Oriental room, decorated in rich reds and purples, with a taste of the east.
Email Post