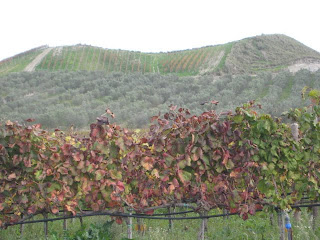 A day for more Cirò. We spent the morning with Raffaele Librandi, whose family company is the biggest producer of Cirò. First we went to see their vineyards at Azienda Rosaneti near the village of Rocca di Neto. Raffaele explained that they have identified 154 different indigenous varieties in Calabria, which have been simplified to 70 different strains, identified by DNA. The ancient Greeks had brought dried grapes to the region and planted the pips, and vines grown from grape pips will apparently transmute slightly, so that among the 154 varieties, there are some that are so similar to be almost identical. At Rosaneti, Librandi have 160 hectares of vines, as well as 80 hectares of olive trees, mainly of Magliocco and Gaglioppo, as well as some Greco and Chardonnay. They also have vines near the sea. The harvest takes over two months – Chardonnay ripens early and the indigenous varieties are not ready for picking until the middle of October. The cellars near Cirò Marina have all the modern equipment that you would expect. Raffaele explained how his grandfather had begun with just three hectares in the 1950s; the family estate had grown to 40 hectares by 1997, and now totals 232 hectares of vines, as well as extensive olive groves. His father Nicodema, travelled to England to sell his wine, without speaking a word of English. 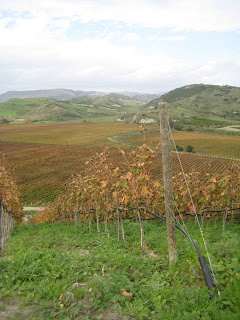 We were treated to a comprehensive tasting.

2009 Cirò bianco – a pure Greco, with some appealing leafy fruit; a light delicate palate, with some peachy hints and good acidity.

2009 DOC Melissa – a neighbouring DOC to Cirò, and also from Greco bianco. This was more mineral, with tighter firmer fruit, and from higher vineyards with a lower yield.

2009 Critone, Val di Neto made from Chardonnay with 10% Sauvignon. This did not do anything for me. Why bother? I wondered.

2009 Efeso, Val di Neto. Mantonico with six months oak ageing. This was nicely rounded with well integrated oak. A hint buttery on the palate, and quite elegant with good acidity.

2009 Cirò rosato. A pure Gaglioppo, made by running off the juice after 12 hours. Rounded strawberry fruit on the nose and a ripe vinous palate, with a dry finish.

Raffaele explained how they had experimented with international varieties in the 1980s. So the next pink was 2009 Terre Lontane a blend of 70% Gaglioppo and 30% Cabernet Franc. It had a more structured tannic on the palate, with a slightly sweet finish and was altogether less harmonious.

Asylia, which is the old name for Melissa, was a pure Gaglioppo. Raffaele explained how Melissa had almost disappeared, but others had followed the example of their first vintage in 2001. They distinguish it from Cirò with a shorter maceration at a lower temperature so that it is light red in colour, with a dry nose and a hint of liquorice on the palate, and a tannic edge on the finish.

2009 Cirò is given ten days maceration – any longer and the wine is too tannic. It was dry and peppery, providing easy drinking.

2007 Duca Sanfelice riserva Cirò, from older vineyards, and a longer maceration, and some ageing in stainless steel tanks. Gaglioppo oxides easily and is already quite tannic, so that there is no tradition for ageing it in wood, not even in large botti. Traditionally they just used concrete vats. It is fairly light in colour, with a dry nose, but more depth on the palate than the previous wine, with cherries and liquorice and a tannic streak.

Next came 2008 Magno Megonio, Val di Neto, named after the Roman centurion, whose will dates the existence of early Calabrian viticulture. It was a pure Magliocco, given twelve month in French oak. This was deeper in colour, with a firm dry nose, and hint of liquorice. The oak was nicely integrated, and the palate had more structure with more body, so that it was riper and fleshier, with softer tannins.

Gravello IGT Val de Neto was a blend of 60% Gaglioppo and 40% Cabernet Sauvignon. This was the first wine that they put in barriques and the wine on which they built their reputation. 1988 was the first vintage. It had quite a firm nose, with some rounded cassis fruit and well integrated oak, with a firm tannic streak. You could see its appeal to an international market. As Raffaele said; it put them on the map and made everything else possible.

And we finished with 2008 Le Passule, from Mantonico grapes that had been dried for fifteen days on wooden trays outside. The juice was kept into barrel for ten months. The colour was amber golden, with a touch of oak on the nose, while the palate was rich and sweet with a tannic streak and some hints of dried apricots. And then we adjourned to a little restaurant in the village of Cirò,. Ristorante Aquila D’Oro, run by Carmela and Francesco. She cooks; he waits. The decor leaves much to be desired, but that is irrelevant; the food was to die for. We limited ourselves to antipasti – I use the word limited with care, as we were treated to a banquet, a succession of different flavours – soppresata, salsiccia, capocolo and pancetta went without saying; pizza with sardines and pepperoncino, fried ricotta, stuffed mushrooms; something called stighioli which came from unmentionable bits of a goat, stuffed aubergines, broad beans skins, prepared with vinegar, olive oil, bread crumbs, garlic and of course chilli, a mixture of onion, pumpkin and chilli, an eggy concoction with onions and tomatoes. 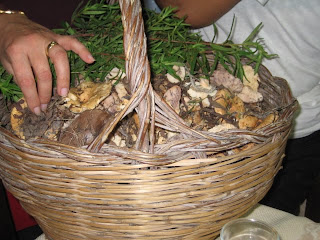 We managed a tasting sample of fusille with meatballs and tomato, and chilli – we put chilli on everything, observed Carmella – there is apparently a unit of measure for the heat of a chilli. This was washed down with liberal quantities of Librandi's Cirò. And then a couple of homemade liquors were produced, flavoured with bay and fennel. Fortunately there was nothing more demanding to do in the afternoon than be conveyed towards Bari for the final part of our trip, a morning in Puglia. 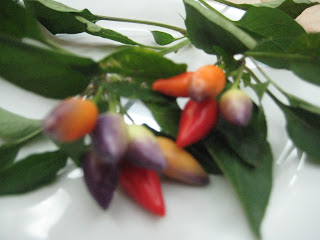 But first a cautionary tale. The two producers of Cirò who we met both emphasised that Cirò is made from the original indigenous grape variety Gaglioppo. Consequently I was horrified a day or two after my return to read the headline, Suicidio in Cirò, in Franco Ziliani’s superbly informative weekly newsletter WineWebNews. Quite simply the consorzio of Cirò has allowed the inclusion of ten percent of international varieties such as Merlot and Cabernet Sauvignon in the misguided belief that the wines will sell better – sales abroad are small and they believe that it is because 'our wines are too Calabrian'. Have you ever heard such nonsense? Italy has a wealth of wonderfully original grape varieties – that is part of its charm - and one of the astonishing things about those of Calabria is that despite the summer heat, these varieties perform very well; they do not suffer from the heat; they ripen late, almost closing down during the summer and their wines are not excessively high in alcohol, nor lacking acidity. Indeed I was surprised by the elegance of Cirò, compared with other wines produced in a warm climate. The reasons that Italian wines do not sell well on the international market have absolutely nothing to do with their unusual indigenous grape varieties.
Email Post

Bob Rossi said…
Excellent point about indigenous varieties and sales. I generally prefer Italian wines that are made from indigenous grape varieties. Occasionally I like something that has a little Cabernet Sauvignon or another "international" variety added, but am generally tourned off by attempts to make "Super Tuscans" or "Super Calabrians" or whatever.
30 November 2010 at 13:04