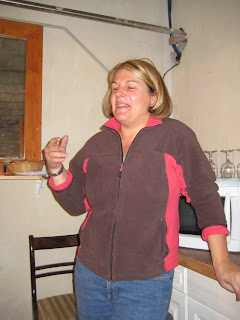 Catherine Wallace is young and energetic, and she needs to be. In 2005 she bought Domaine Combebelle from Bertie Eden. It’s a wonderful spot on the edge of the appellation of St. Chinian in the hills above Villespassans, lying at an altitude of 250- 300 metres. The views are fantastic; the shimmering light in the distance is the Mediterranean, and the Etang de Leucate, with the Pyrenees in the background. Those you do not want to see too clearly, as when they clearly defined, it is a warning of imminent rain.

The estate has eleven hectares in production, Grenache Noir and Syrah and Catherine is planning a further six hectares of white varieties, probably Grenache Blanc, or Gris. The soil is red calcaire, and there is also some schist. Yields are low, an average of about 21 hl/ha over the last four years. Catherine and her husband, Patrick, had looked specifically for an organic vineyard, and bought this, which is biodynamic. Catherine, however, is more rational in her approach and is not adhering strictly to biodynamics; she is not planting cow horns, but prefers to buy comparable preparations; she prepares her own composts and prunes according to the calendar. It is a balance of the purist, versus the rational; she tends to the rational. However, things have proved tougher than she initially expected; the property had been on the market for three years, so the minimum had been done in the vineyards, with the result that there were some pretty tenacious weeds that needed shifting. But she is undeterred; she has wanted a vineyard of her own since she was eight.

She has not studied or trained as a winemaker but has worked in vineyards and cellars in Bordeaux, Alsace and Germany, as well as in the British wine trade for the likes of La Vigneronne, Adnams and Majestic. She admits to a steep learning curve when she arrived at Combebelle, and as a winemaker says that she lets Nature take its course. Some of her vineyards are handpicked, and some mechanically harvested. She uses natural yeast and old oak barrels.

2009 Rosé les Cerisiers, St. Chinian 7.50€
Quite a light pink orange colour. Dry raspberry fruit; fresh and rounded with good acidity.
It is all saigné, after 24 – 36 hours. 75% Syrah and 25% Grenache, fermented at about 15ºC. The fermentation takes about three weeks or so and the wine is completely dry.

Currently Catherine makes three reds, and she is planning a fourth.

2007 Chateau Combebelle, - 8.50€ A blend of 70% Syrah and 30% Grenache Noir, from each of the nine different vineyard plots, so it is really representative of the estate. Traditional vinification, with open tanks, and no cooling plates, so the fermentation can get up to 35ºC. The wine then spends 12 months in two year old barrels; the final blend was done at the beginning of 2010 for bottling in March.
Medium colour; quite a sweet nose with some peppery notes. In 2007 Catherine said that she really concentrated on fruit; she wanted structure, but not so much as to overpower the fruit. I think she succeeds. The oak is well integrated with supple tannins.

2006 Henri, St. Chinian 15.00€
Named after her twin sister’s son; he was born in 2007, Pure Syrah from young vines, a barrel selection. Quite rounded and oaky on nose and palate. The oak dries a little on the finish, but with some peppery, meaty notes. Catherine wants concentration, but certainly not over-extraction. She didn’t make a Henri in 2007; she didn’t like it, so did something different, and in 2008 aged it in 500 litre barrels for two years. She now considers it her flagship wine.

2007 Les Fleurs Sauvages, St. Chinian.
A blend of 60% Syrah and 40% Grenache, including her oldest vines, some 50 year old Grenache. Quite a rounded nose, with some firm tannins on the palate, and rounded fruit. Quite dry and leathery with dry spicy flavours. Quite intriguing.

And our tasting finished with some vat and barrel samples from more recent vintages. And even though she was in the middle of harvest Catherine had very hospitably invited us to lunch. There was unlabelled magnum on the table. Taste it first and then I’ll tell you what it is. There was a hint of oak on the nose, with more oak on the palate, and some lovely fruit underneath. It was rounded and youthful with well-integrated oak. And then she told us that it was Henri 2008. And quite delicious it was too, but with plenty of potential for development in the bottle. 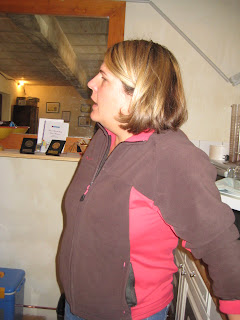 HamishWM said…
The Combebelle Rose is absolutely delicious. Great that Catherine is making a success of the Combebelle property. It is certainly in the hinterland! But nevertheless a lovely area......and potentially excellent soils for some deep reds.
4 November 2010 at 10:30