HIGHLIGHTS OF CALABRIA - DAY ONE 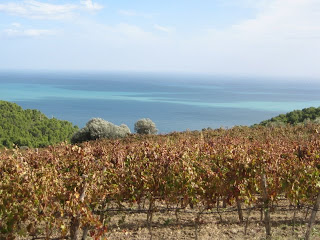 Calabria was new and unknown to me, and it was wonderful. For a start the weather was like an English summer, even though it was early November. The vines looked spectacular with wonderful red and golden leaves in the sunlight. And the wines made for a veritable voyage of discovery, with grape varieties that I had never heard of, Magliocco, Gaglioppo, Mantonico, Pecorello, Greco bianco and so on. And we were treated to some delicious local dishes. Calabrians are as proud of their cuisine as of their wine.

We flew to into Crotone and stayed in a welcoming agriturismo, Dattilio, which is part of the wine estate of Ceraudo, a little way up the coast. Our first day was spent exploring the northern half of Calabria, called Citra, and the province of Cosenza. We drove up the coast almost as far as the Basilicata and then over the hills, paying short visits to several producers and finishing with a tasting in Cosenza, and an explanation of the proposed DOC Terre di Cosenza, which will incorporate a whole host of unknown, and frankly, irrelevant DOCs. And this being Italy, with the usual healthy disrespect for wine regulations, there are also various IGT such as Valle dei Crati, which allow for the so-called international grape varieties as well as the indigenous ones. Personally I fail to see the need to drink indifferent Cabernet when you can drink Magliocco. However I did succumb to some Syrah. The scenery is hilly and undulating. Sadly Cosenza we only saw in the dark.

Pink : Az. Agr. Serracavallo 2009 Don Fili rosato. 12.00€ This was a pure Magliocco dolce, of which a third had spent a few weeks in some new American oak. There was a tannic streak which gave the wine some backbone, balanced by some ripe fruit. Surprisingly successful.

Red: 2006 Vigna Savuco, a single vineyard from the same estate, pure Magliocco dolce, from overripe grapes. This was serious, with lengthy ageing in both vat and barrel. Deep colour, solid and dense needing time.

Red: Tenuta Terre Nobili – 2009 Alarico, a pure Nerello, which is similar to the Nerello Mascalese of Sicily, given six months in new French oak. Smoky oak on the nose, with a tannic streak on the palate, with some supple fruit and peppery freshness. The oak was nicely integrated with a harmonious finish.

Az. Agr. De Caro – The winemaker here comes from the Alto Adige but is very committed to Calabria.
White: 2009 Feudi del Duca - the land belonged to the dukes of Cosenza- from Mantonico and Greco. A light herbal note on the nose, and one the palate an almost sappy salty note, with fresh acidity.

Terre del Gufo, in the unknown DOC of Donnici.
Red: 2008 Portapiana from Magliocco dolce, Greco Nero and a little Mantonico was ripe and oaky on the nose, but quite elegant, with some balancing fruit.

To my surprise I preferred 2008 Timpamara, a pure Syrah, which had spent a year in oak. It had rounded peppery fruit, with youthful spice and some satisfying varietal character. Eugenio Muzzillo makes just 3000 bottles of this.

Az. Agr. Murini Red: IGT Esaro 2008 Elaphe, from Magliocco and mainly Aglianico and a little Cabernet Sauvignon, with some barrel ageing. This had ripe berry fruit, with an elegant finish. And was the last wine of the day which explains why my tasting notes are running out of steam.

Gastronomic highlights – my very first taste of burrata, a wonderful cow’s cheese, made from left over mozzarella, to which a hefty dose of rich cream is added. It was creamy and succulent.

Super fresh ricotta – made that morning, so that it was fresh feather light. By the next morning it had completely lost its frothy quality.

There are various DOP for local foods, including clementines and lemons, and figs, dried figs from Cosenza, rice from Sibari, and cheeses such as cacciacavallo, as well as local pecorino. 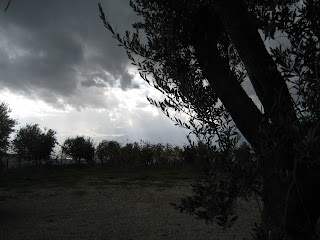