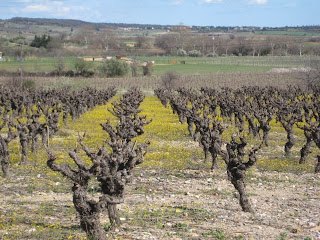 I had a great time on Monday afternoon, comparing St. Chinian with Faugères for a tasting at the Maison du Languedoc. There were five wines from each appellation and the idea was to see if there was a common thread to each appellation. My audience was a group of young sommeliers, from The Fat Duck and the Manoir aux Quat' Saisons, amongst others, and an actor who works as a sommelier between plays. They were not shy about voicing their opinions and we had a good discussion, but I do have to say that we did not come to any great conclusions. The two appellations are too similar, and too varied.

Consider what determines the taste of a wine .... First take the grape varieties. You find Syrah, Mourvèdre, Carignan, Greanche and Cinsaut in both appellations, but in varying proportions, depending on each wine grower’s preference. The climate of both appellations is pretty similar, with the hills of the Caroux and the Espinouse protecting them from north winds. The soil is more complicated – Faugères is schist 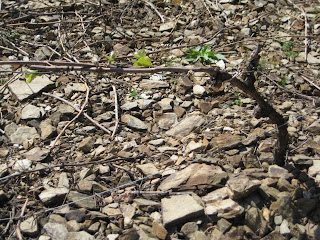 and perceived wisdom has it that the appellation of St. Chinian is split in half by the Vernazobre river, with schist in the north and limestone and clay in the south, but there is also some sand, and some growers have all three soil types in their vineyards, so that it is much more complicated than you might think. Limestone and clay are generally deemed to make wines with structure and body, while wines from schist may lack acidity, but have some lovely supple fruit. So you might expect some St. Chinian to be more structured, and Faugères riper and softer, but not necessarily so. The wine grower also makes their mark and here individual preferences really come into play, with numerous permutations in the blend, not to mention ageing techniques, as well as the minutiae of details in vineyard and cellar.

We may not have worked out how to tell the difference between St. Chinian and Faugères, but the wines were delicious, so a good time was had by all. We tasted them in five pairs:

Prices are per bottle, ex VAT

1. 2008 Domaine de Cébène, Felgaria, Faugères - £15 - £18. Leon Stolarski
This is a new estate in Faugères. Brigitte Chevalier had worked in Bordeaux for twenty years and arrived in Faugères to make her first wine in 2008. She specifically looked for cool north facing vineyards on schist and that is what she found, in a wonderful site. 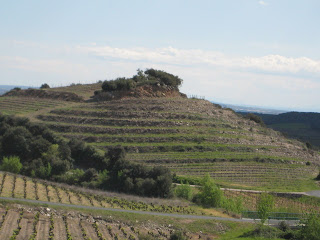 Blend: 50% Mourvèdre, 30% Syrah, 20% Grenache. She uses some 500 litre barrels for part of the fermentation and the wine is aged in old barriques. She favours meticulous but simple winemaking.
Medium colour; lovely spicy rich fruit and quite opulent, but tempered with a touch of oak. Nicely balanced and elegant

2009 Clos Bagatelle, Donnadieu Matthieu and Marie, St. Chinian This is one of the old estates of St. Chinian, passed mainly from mother to daughter since 1623 and now run by the vivacious Christine Deleuze. This cuvée is named after her two children. Her vineyards are on both limestone and schist.
50% Syrah, 20% Grenache, 15% Mourvèdre, 15% Carignan
Very perfumed on the nose, and lovely perfumed spicy fruit on the palate, with a touch of fresh acidity on the finish. Very easy drinking and immediately appealing.

2. 2008 Mas d’Alezon, Presbytère, Faugères £8.95 Terroirs Languedoc
This is Catherine Roque’s (of Clovallon fame)Faugères estate. At Soumatre she has some the highest and coolest vineyards of the appellation, at 450 metres. Some spice and liquorice, with a fresh finish, but a slightly inharmonious edge. I wondered if it had been affected by the hail of 2008.

2007 Domaine la Madura, Classique, St. Chinian. £6.95 Terroir Languedoc
Another relatively new estate. Madura means maturité or ripeness in Occitan. Cyril Bourgne also worked in Bordeaux and 1998 was his first vintage in St. Chinian. He has 14 hectares of vines, on all three soil types, so a veritable patchwork. He is particularly enthusiastic about Mourvèdre, and dismisses the idea that it needs to see the sea, as une jolie histoire. 36% Grenache noir, 38% Carignan, 15% Mourvèdre, 11% Syrah. The Grenache grows on schist and the Carignan on limestone. Both the Mourvèdre and Syrah are aged in wood, while the Grenache and Carignan are kept in vat. He is aiming for balance. This was lovely; quite firm fruit on the nose; rounded smoky and spicy with good body. Quite mouth filling and very harmonious

3. 2007 Léon Barral, Tradition £12 - £14 Cave de Pyrene
Didier Barral has 25 hectares around the village of Lentheric, on south facing slopes. He is a very intense, very committed winemaker. His vineyards are biodynamic and he favours very simple winemaking. The grapes are hand-picked, triage is important; he may include the stalks, and he always uses natural yeast and favours long cuvaison and oak ageing.
50% Carignan, 40% Grenache Noir and 10% Cinsault Quite a deep colour; some fruit but with a slightly sweet ‘n’ sour edge. I found it rather puzzling. It did not have as much weight and body as I expected.

2007 Chateau Pech Menel. St. Chinian This was a new estate for me, run by two sisters, with 20 hectares in one large plot near the village of Quarante.
70% Syrah, destalked and 30% Carignan, vinified by carbonic maceration..
Quite sweet and perfumed, easy supple fruit and some ripe spice. I sensed the influence of the garrigues in this wine.

4. 2006 Domaine Ollier Taillefer, Grande Reserve. Faugères £7-8 Amphora Wines
Anyone who reads my blog with any regularity, will know that this is one of my favourite Faugères producers. This is their middle quality of Faugères, a selection of old vines, but no oak. 35% Grenache Noir; 15% Carignan, plus 35% Syrah and 15% Mourvèdre, Nicely balanced, with ripe concentration fruit. An elegant palate and drinking deliciously

2007 Terres Falmet, l’Ivresse des Cîmes, St. Chinian £8 Vine Trail
Again another new estate for me. Yves Falmet used to be a flying winemaker, but wanted to do his own thing and bought his vineyard, 20 hectares on limestone, near Cebazan, in 1996, He favours very simple winemaking, wanting to make wine as naturally as possible, following bio-dynamic practices, and wine qui sort de l'autoroute du vin. 40% Mourvèdre, 30% Grenache Noir, 30% Syrah. No oak. Quite a light nose, quite fresh with good fruit and a tannic streak. Nicely balanced.

This pair offered the most convincing contrast, between the spice of the schist of Faugères and the limestone of St. Chinian, which gives more structure and weight.

5. 2005 Domaine Jean-Michel Alquier, les Bastides d’Alquier
£10 - £11 Richards Walford
Jean Michel Alquier, not to be confused with his brother Frederique, who has his own separate estate, is one of the best wine growers of Faugères. His father Gilbert was one of the pioneers of the appellation, he planted Syrah back in 1960 and was one of the first to bottle his own wine and to age it in barrel, with a cuvée prestige in 1983. I wrote a profile of Jean –Michel a year or so ago for an American magazine, Quarterly Review of Wines, so I will post that shortly, for more information about him.
60% Syrah; 30% Grenache, 10% Mourvèdre. Quite a restrained nose with a touch oak. A ripe palate, again with some well-integrated oak. Nicely structured; good body and still very youthful

2004 Mas Champart, Clos de la Simonette, St. Chinian £10-£11 Richards Walford
Matthieu and Isabelle Champart come from northern France and first came to the Midi on holiday in 1976, and decided to stay, and created a 16 hectare estate, on limestone. These days they are rated amongst the leading producers of St. Chinian. 30% Grenache Noir, 70% Mourvèdre. Their Mourvèdre vines came by massal selection from Domaine Tempier in the Bandol. Four to five week maceration on the skins. The wine spends 18 months in demi-muids; new ones for the Mourvèdre and older barrels for the Grenache.
Quite a rounded nose with some dry spice. A touch of maturity, with good fruit, tannins and depth.

This pair was the most similar, even though Mas Champart is produced from limestone and les Bastides from schist; they were both quite structured with lovely spicy southern fruit, and both remarkably youthful for their vintages. I certainly would not have bet any money, let alone serious money, as to which was the St. Chinian and which Faugères! 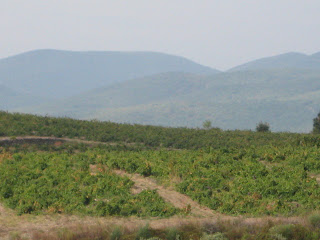