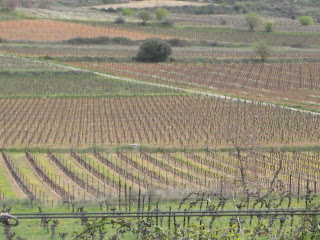 It’s been a wet month of March in the Languedoc. We got down to our house last Saturday and apparently missed some monsoon conditions a week or so ago. Opinions varied as to whether 200 or 300 mls of water had fallen in three or four days. Whatever, that’s an awful lot of rain in a short space of time. In some places the rain was very violent and elsewhere more gentle, but still persistent. The vines are happy, and so are the vignerons, with water reserves looking good for the summer. But the rain also meant that everyone is behind with their pruning, so we had the chance of a pruning lesson with our friends, Deborah and Peter, at Mas Gabriel. 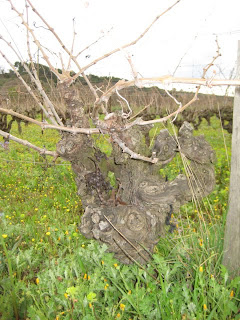 I might have answered a question on pruning for the MW exams, but it has certainly never made any sense. There is nothing quite like looking at a vine and working out just what you are doing to do to it. We were let loose, well, closely supervised on a small vineyard of old gobelet vines, Carignan with a few interloping Cinsaut. You can tell the difference; Cinsaut has a much straighter trunk and the shoots were thinner and more fragile than Carignan, which has wonderfully gnarled, twisted trunks. I looked at a vine, which needed a drastic prune and Deborah explained: you need to leave four shoots; if there are two side by side, you go for the lower shoot, but it also depends on its position in the vine and how other shoots will be affected; the shoots need to be spaced out, with at least a fist between each shoot, and then you cut, leaving just two buds per shoot. And after a while, I found I did get my eye in, and it did begin to make sense. 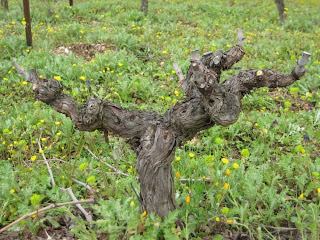 Some shoots are remarkably tough and resistant to normal secateurs, but Peter and Deborah also have electric secateurs. These cut through the thickest shoots with consummate and effortless ease, but they are potentially lethal. The first rule is: keep your left hand, if you are right-handed, firmly behind your back…….I was also surprised by the amount of sap the vines produce when cut; you really could see tears of sap. 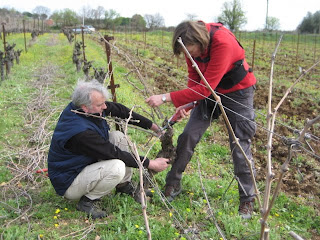 It was a lovely sunny morning, instead of the rain that had been forecast. Deborah and Peter favour organic viticulture, ploughing between the rows, so their vineyards are a carpet of white rocket and field marigolds. And spring was in the air. 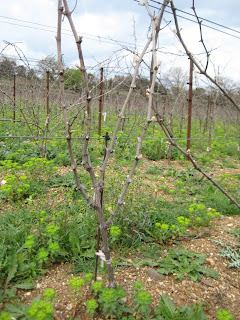 Then we went over to their vineyard of young Syrah vines. This year is their 4me feuille and two shoots need to be tied down onto wires, for cordon royat. These are the shoots which will be the base for growth in years to come. You choose the two lowest and strongest shoots and cross them over leaving four buds per shoot. The bark on the shoot creeks alarmingly and worse still is the sharp sound of a branch cracking. I fear I was guilty – but so was Deborah. You have to bend the shoot very gently, almost massaging it, to persuade it to lie horizontal to the wire. And as budbreak is beginning, you have to be careful not to inadvertently damage a young fragile bud. I was found guilty again. However, it was surprisingly satisfying work, and the morning passed in no time at all. 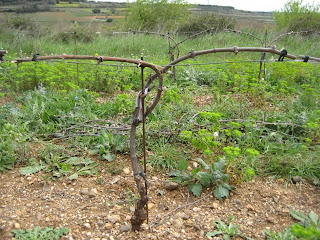 I spent a morning doing the same with Emmanuel Pageot in the "Cadables" vineyard, and I too was reminded of the difference between theory and practive. Great fun though, and Emmanuel was a willing and patient teacher. Here is the video that I shot to demonstrate what we did: http://www.youtube.com/watch?v=6p3DHG-UNts

I owe you thanks. Karen and Emmanuel's wines arrive in Chicago the first week of May becuase I found them after reading your blog. We are thrilled to strat working with the wines here in Illinois.

Anonymous said…
safemeds
Thanks for this wonderful lesson. I this looks easy but I isn't keep up the good work and also keep posting.
6 December 2011 at 20:13