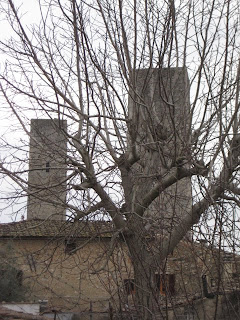 I spent a week in Tuscany in the middle of last month. And you could be forgiven for wondering what that has to do with the Languedoc. Quite a lot as it happens. As well visiting Florence, Montepulciano and Montalcino for lots of Chianti Classico, Vino Nobile and Brunello, I spent some time in the lovely hilltop town of San Gimignano, which produces one of the few white wines of Tuscany, Vernaccia di San Gimignano. And in order to draw attention to their Vernaccia, the wine growers have audaciously taken to comparing their wine with a French appellation. The first time they did this, five years ago, they chose Chablis and acquitted themselves honourably. Two years ago their choice was the white wines of the Rhone Valley and this year they opted for the village of Calce in the heart of the Roussillon hills. 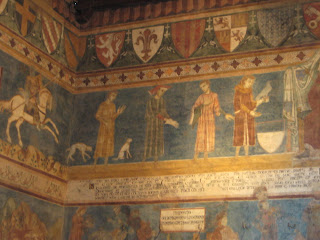 The tasting took place in the Sala Dante in the Palazzo del Popolo in the centre of San Gimignano, where Dante came in 1299 as ambassador from the city of Florence, to make an appeal to the people of San Gimignano. Only in Italy would you have such a historic setting for a tasting. You could not fail to be awe-inspired by the surroundings, with the walls covered in magnificent frescoes, dating from 13th and
14th centuries.

The choice of Calce was determined by two young Italian wine journalists, Antonio Boco and Paolo de Cristofaro, who had set out to look at Roussillon as a possible comparison with Vernaccia di San Gimignano and then come to realise that so much was centred on the village of Calce. Listening to them, you sensed that it was a really exciting discovery; their enthusiasm was infectious. They talked about the landscape, the winds, the luminosity and the scents of the countryside. The grape varieties of Calce are Grenache Gris, Grenache Blanc and Macabeo, which like Vernaccia are fairly neutral, and not particularly aromatic. They are varieties that express terroir. And there are some wonderful old vines, fifty years and more, with centenarians not at all unusual. They talked about three micro-zones, with schist in the south, in vineyards looking towards the Pyrenees. On the north side of the village there is limestone or calcaire, which is the origin of the name of the village, providing wines with firm minerality. And then there are grey marnes, which allows for very deep root systems. Calce is in fact further south than San Gimignano, which momentarily took me by surprise. The population of the village is 200 people, and there are 400 hectares of vines. 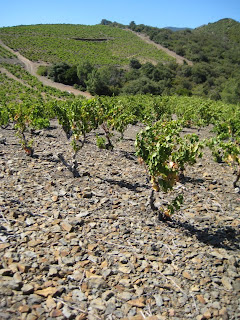 First off was Thomas Teibert from Domaine de l’Horizon, with his 2008 Côtes Catalanes. A blend of 50% Macabeo with Grenache Gris and a touch of Grenache Blanc, from 85 years old vines and older, grown on limestone soil. Thomas is German and worked in the Alto Adige before coming to Calce. And why Calce? He came to visit, and met Gérard Gauby who is THE pioneering wine grower of the village, and fell in love with the area, and stayed when he realised that there were vines to be bought from retiring coop members.

2008 was quite a cool year, with cooling nights and cool weather at the vintage. The wine has a little colour, with a firm dry nose. On the palate there is a firm minerality with an intriguing hint of fennel. There is a lot of wild fennel in the region, giving its name to a now defunct Vin de Pays Côtes des Fenouillèdes. And there is firm streak of minerality. Altogether very satisfying.

Next came Thomas Lubbe. He is not a native of Calce either; he was born in South Africa and brought up in New Zealand. He came to do a stage chez Gauby, and ended up by marrying Gérard’s sister Nathalie. And has created Domaine Matassa, with his partner, Sam Harrop. He explained how he was struck by the minerality; even though the summers can be hot, the wines always have a refreshing minerality, with a firm natural acidity. That is why he has put down roots in Calce, apart from meeting Nathalie, of course. His 2007 Côtes Catalanes is a blend of Grenache Gris and Grenache Blanc. The colour was light golden, with a rich perfumed nose. Again I found fennel, and on the palate there was a mineral saltiness, a rich texture, a certain sappy character and lovely satisfying mouth feel. 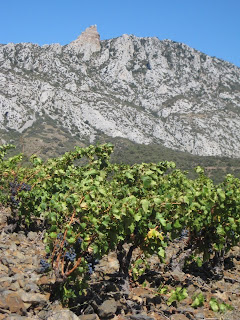 Then there were two wines from Olivier Pithon. Sadly he could not be present and a colleague spoke for him. His roots are in the Loire Valley, where his brother Jo Pithon has an estate. His first vintage in Calce was 2001 – again Gérard Gauby has some responsibility, for Oliver visited him without knowing anything about the terroir of Calce. Both wines are aged in oak for 12-16 months, including some new barrels, and fermented in small wooden vats, with a gentle pressing and natural yeast.

The first wines was Côtes Catalanes 2008 D18, named after the road that leads to the village. Calce is not on the way to anywhere; you have to want to go there, and as this tasting showed, there are indeed plenty of reasons for going there. Again this is a blend of Grenache Gris and Grenache Blanc, grown on grey schist. Light colour; with a firm stony nose, and on the palate, with firm minerality and acidity and nicely textured.

2005 D18 – A warmer vintage than 2008. A slightly tarnished colour and a hint of maderisation on the nose, while the palate was fresher, with rounded herbal nutty notes. Quite ripe and board, but with a good streak of acidity. 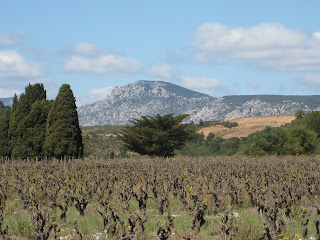 And to finish with Calce there were two wines from Domaine Gauby. When I first met Gérard in the late 1990s, he had been making wine for about fifteen years, and I asked him about the history of the area and his estate, to which the reply was quite simple: L’histoire, c’est moi. He had removed the family vines from the village coopand there is no doubt that his initial work has had a dramatic effect on the fortunes of Calce, and its viticultural reputation. Gérard is helped by his wife Ghislaine, and now his son Lionel, who was present in San Gimignano.

2008 Coume Gineste Côtes Catalanes, a blend of 45% Grenache Blanc, and Grenache Gris, with 10% Macabeo. Grown on grey schist and argilo-calcaire, on north facing vineyards. The wine spends twelve months in new and one year barrels. Otherwise the wine making is very simple.

2002 Coume Gineste A little colour; quite mature almondy notes, on the palate some intriguing texture, and some firm salty mineral flavours. Textured and structured with very good acidity. A firm long finish. 2002 was a cooler and also wetter vintage. 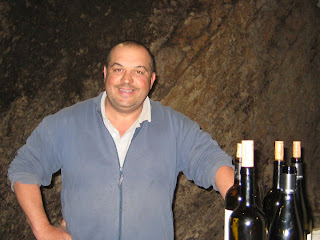 The six wines provided a wonderful bird’s eye view of the flavours of Calce, and then we moved onto Vernaccia di San Gimignano, when it became clear that the comparison was certainly not as far-fetched as you might have initially expected. The first wine, 2009 Tenuta la Calcinaie – again another name related to chalk – calcinaires in French – was delicate and herbal, with some fresh minerality.

2008 Mattia Barzaghi was quite heavy and textured; it was fermented in stainless steel and had spent just one month in oak.

Cesani is one of my favourite Vernaccias, with their 2007 Sanice, which is part fermented in oak and part in stainless steel. Quite a deep colour, Herbal hints on the nose and quite a rich, textured layered palate; the oak is nicely integrated, with a rounded, sappy quality on the finish. Nicely crafted. Again some salty minerality.

2006 La Castellaccio. Aged on the lees but not in oak. Quite herbal, fennel notes, with very good acidity. We were told that Vernaccia should stay on the fine lees, to help maintain its acidity.

2001 Panizzi riserva, from one of the estates that has created a reputation for aged Vernaccia. The wine had spent 12 months in barrel. Light golden colour. An intriguing mature nose, with some rounded textured herbal flavours on the palate, and just a hint of oak. Nicely rounded. And a great finale to a fascinating comparative tasting.

The afternoon continued at the modern art museum in San Gimignano for a tasting of Vernaccia from several other producers. The views out of the window over the roof tops of the town were rather more appealing than the exhibits on the walls, and I did enjoy the wines. 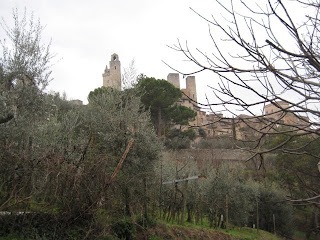 michelecolline said…
I tried to get in to the panel discussion the first year but since I wasn't a wine writer(only an ex wine seller of 20 years)they wouldn't allow me. The second year I did go to the general tasting which is a worthy experience. I also worked a couple of harvests at Tenuta Le Calcinaie and you really must try his Vigna ai Sassi Vernaccia for lots of steely minerality
9 March 2011 at 19:16