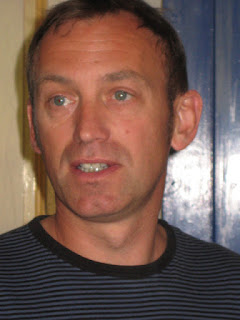 I first met Gavin Cresfeld when he was the wine maker at la Sauvageonne, a substantial property in the hills above St. Jean de la Blaquière. Since then Gavin has moved on, and so has La Sauvageonne as it was bought last year by Gérard Bertrand, one of the large players in the Languedoc.

Gavin meanwhile has settled in the even more isolated village of les Salses – you take a winding, scenic road to head even further into the hills from St. Jean – and bought his own vineyard, one three hectare block above St. Jean de Blaquière. It is planted with Cinsaut, Syrah and Grenache, on volcanic grès and schist, called ruffes. He also has another plot of Syrah on limestone and some Carignan on schist, making a total of 4.5 hectares. His first vintage of La Traversée was 2009. 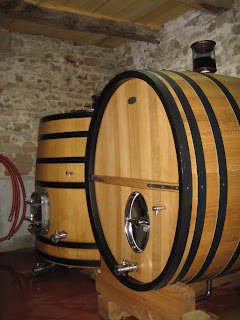 Gavin’s cellar is on the ground floor of a classic maison de maitre in the centre of the village. The first thing I saw was a concrete egg? Why an egg? It all depends on fluid dynamics – the egg makes for movement, unlike a vat. It imitates the old amphora. This egg was made from 15 centimetre thick concrete, without any steel reinforcement; and the other advantage is that concrete maintains a constant temperature, unlike stainless steel.

Gavin uses natural yeast and the fermentation can last as much as two months. He works on taste, and not analysis. He also has a couple of tronconique vats – I am never quite sure how to translate tronconique into English – anyway it’s a tapered vat, made either of oak or concrete, which is also used for fermentation. The photos should explain. And as you can see Gavin, has both. He observed that he can use more whole bunches in the tronconique vat, and also it is easier for pigeage. And in addition he has an oval foudre, which he uses for the élevage of the Carignan and Grenache, after they have fermented in the egg, while his Cinsaut is fermented in the tronconique vat and then aged in the egg. In contrast the Syrah is fermented and aged in barrel, but nothing too small. 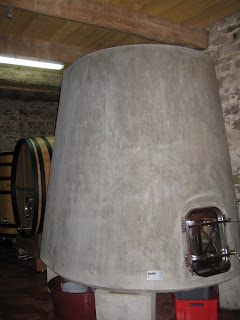 You sense immediately that Gavin is a thoughtful, discursive winemaker. He related how a bottle of Rully St. Jacques, when he was 12, was a turning point for him and at 19 he began working as a sommelier, and then realised that what he really wanted to do was make wine, so in 1995 he enrolled at Plumpton in East Sussex, and then did at stage at Domaine de Poujol – see one of my very early postings. Then he was offered two jobs – in Argentina or at La Sauvageonne. He chose the latter and worked there for eight years. Gavin is quite scathing about some of his fellow vignerons – so many of them listen to their oenologist, and don’t take decisions for themselves. He says that he does everything by intuition and doesn’t listen to anyone else, and added humbly that it’s a bit arrogant. He works on taste and doesn’t bother with analysis.

Then we tasted the components of La Traversée, starting first with a pure Cinsaut 2010. In fact this was so good, that Gavin had decided to bottle it as a single variety. I was most disappointed to find that it was already sold out.

Medium colour; elegant perfumed nose. Lovely silky tannins. Velvety mouth feel, reminiscent of Pinot Noir. Very good acidity and minerality. It is elegant and powerful at the same time, with lovely length and a liquorice note that reminded me of Pinot Noir. It was a Cinsaut quite unlike any other. It was fermented in the concrete tronconique vat and aged in the egg.

Next we tried a blend of Carignan and Grenache, both fermented in the egg, with élevage in foudre. Deep purple young colour. Discreet oak on nose and palate with some dry spicy fruit. The Grenache gives cherries, and Carignan some rustic tannins. It had intense fruit and a long finish.

Gavin explained that 2010 was a much better vintage than 2009 – streets ahead. There was enough water and it was not so hot, with cooler nights and a better balance. He is aiming for intensity and purity; what he called quite a linear style, with balance. Acidity is important. He wants his wine to be representative the area, which is why he has opted for Terrasses du Larzac rather than Vin de France. Terrasses du Larzac must have terroir, intensity and character.

Then we went onto the Syrah, grown on limestone and volcanic sand, which has been fermented and aged in the tronconique vat. It was still in the vat, and was a tad sulky on the nose. But there was some firm peppery fruit, with more perfumed fruit on the palate, and a firm peppery streak, with a fresh finish and silky tannins.

And then we tasted the complete wine, 2009 La Traversée, - 30€
Deep colour; quite intense ripe cassis fruit, with a touch of oak on the nose, which comes from the new oak foudre. It will obviously tone down in subsequent vintages. This was a ripe year, with some lovely perfumed fruit on the palate, and a tannic streak. Rich and mouth filling with layers of flavour and length. It was full of promise and potential and I can’t wait to taste the finished 2010.

And then 2010 la Traversée which will be bottled in April. A blend of Syrah, Grenache, Carignan and Cinsaut. To recap the Cinsaut, Carignan and Grenache were fermented in an egg, and the Syrah in a tronconique vat. The nose was quite delicate, and the palate very fresh, with elegant cherries, and some supple subtle tannins. Lovely ripe elegant fruit. Very finely crafted, with great finesse. ‘This is the wine I want to make’ mused Gavin. 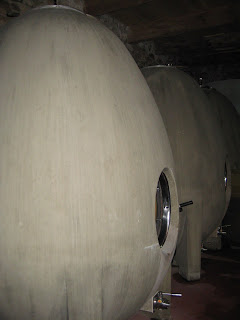 Louise Hurren said…
I've been keeping my eyes and ears open for news of Gavin's latest venture, so I enjoyed this post very much. Any idea where his wines can be found, apart from at the cellar door? Would love to try them. Louise
15 March 2012 at 13:10

Rosemary George MW said…
I realise that I didn't actually ask that question - sorry. Will try and remember to enquire at the Rising Stars tasting next week.
15 March 2012 at 18:46