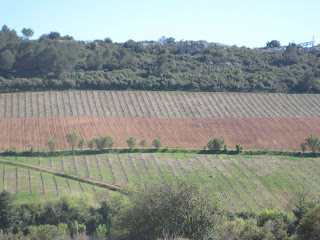 The last in my trio of St. Chinian growers. I first met Yves Falmet at a tasting in London in the Maison du Languedoc and felt that his wines merited a cellar visit. So we arranged a rendez-vous on a side road on the way to Cruzy, so that we could take a look at his vineyards before going on to his cellar. Yves has a magnificent north facing slope of 20 hectares and proposed a walk. This was last year – not in the recent inclement weather where the Languedoc has been colder than London. Yves explained about the importance of geology; he has very good reserves of water, as the plateau above the vineyard, with its layer of clay, collects a lot of water. There is limestone too.

Yves comes from northern France, from the Aube. He related how he began looking for vines back in 1995 and was told that this magnificent plot was for sale, but the previous owner had not looked after his vines. He had practiced desherbage intégrale, the liberal use of weedkiller, which had resulted in a lot of erosion – a nightmare – and his yields were four times what Yves obtains now. Yves worked to create terraces and left grass in order to keep the soil in place.

And then we took a scenic route over the plateau above the vines back to the little village of Creissan, where he has his cellar, in a narrow back street, that answers grandly to the name of boulevarde de la République. It’s a neat little cellar, with old cement vats, some fibre glass vats and barrels, with a tasting gallery above so that you look down on the vats. Yves talked about the difficulties of finding a cellar. 2001 was his first vintage, and from 1996 to 2001 he was a member of the Cébazan cooperative. He found this small cellar in Creissan in July, and was still finishing the renovations on 11th September, and he started picking the next day.....

2010 Vin de France, Cinsaut - 4.00€
As it is a monocepage it cannot be St. Chinian. Élevage in vat; a traditional vinification with a month on the skins. I loved this. Lovely spicy fruit on both nose and palate, with a fresh tannic edge and a nice lift on the finish. Yves observed that the soil gives acidity to his wine.

He does not encourage visitors to the cellar, but in the region you can buy his wines at the Espace Vin in St. Chinian and at the Caves Paul Riquet in Beziers. In the UK his customers are Stone, Vine & Sun and Berry Bros. He is doing well; ’he laughingly observed that when he began he had ‘zero clients and zero money’.

2009 Carignan – 5.00€ Also Vin de France.
Traditional vinification, with destemmed grapes. No carbonic maceration here but four to six weeks skin contact and an élevage in vat. Quite a deep colour, with ripe brambly fruit on the nose. Quite firm tannins on the palate, balanced by ripe fruit, and a rounded body, with a dry finish. Very Carignan.

2007 L’Ivresse des Cimes – 6.00€
A blend of 40% Mourvèdre on the east side of the slope, 30% Grenache from the top of the slope and 30% Syrah from the bottom of the slope. Élevage in vat.
Deep colour. Solid dense firm fruit, with firm leathery notes. Quite a tannic palate, with some wild berry fruit. Quite long. Yves begins the assemblage after the malo is finished, blending in several stages to readjust as necessary. He does not use an oenologist.


2004 Vieilles Vignes St. Chinian – 10€
From 50 year old Grenache, and 70 – 80 year old Carignan, with an élevage in old wood, for three years, without any topping up. It was very intriguing; quite perfumed on the nose, and quite confit, dense, mature and leathery and not at all oaky. Yves observed that ‘the professionals don’t like it’ as it certainly isn’t mainstream. I did like it.

2010 Viognier IGP Oc – 13.€
Light golden, a herbal nose; and on the palate dry peachy fruit with acidity. Yves explained that it had a traditional white vinification, but with no protection against oxidation. And then spent six months on the lees in vat, with lots of bâttonage. Again it was very intriguing with a lot of body and acidity, and maybe a touch adolescent, needing time in bottle.

A fascinating and friendly visit. Yves is a thoughtful and considered wine maker, who is not afraid to experiment and he has very clear ideas of what works in the vineyard and cellar. And he deserves to do well. 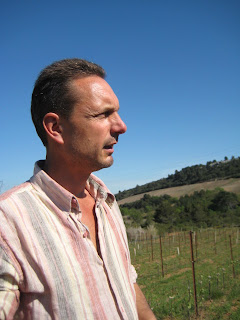