RISING STARS IN THE LANGUEDOC 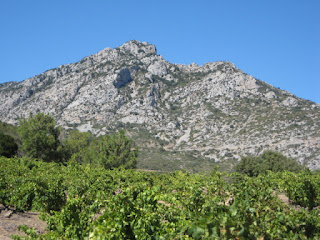 The Maison du Languedoc has taken to arranging an annual tasting of Rising Stars, asking various Languedoc enthusiasts to nominate their own stars. I am not quite sure what the exact criteria are, as one wine grower in the group this year has certainly been making wine for quite a number of years, but since his wines are very good, it was nice to include him. Some already had a UK importer, and some were looking for one.

I began by tasting of a table of bottles without a wine grower in attendance, some names I knew and some were less familiar.

2007 Domaine Ste Croix, Corbières, Celèstra, made by Jon Bowen
Deep colour. Quite firm dry leathery nose, and on the palate a bit riper and more raisiny. Quite warm and concentrated.

Mas Mudigliza – I have come across them at the Fenouillèdes tasting in Tautavel. Dimitri Glipa is the grower.

2009 Côtes du Roussillon, Carminé
Mainly Grenache with some Syrah and a touch of Carignan. I liked this a lot. Deep colour. Quite firm nose, quite solid and leathery, and even more on the palate. Ripe, rounded, warm and leathery. Lots of character. A great sense of place.

Villa Tempora in Pézenas were showing a couple of wines and looking for a distributor. See an earlier post for some tasting notes. Suffice it to say here that both wines were showing deliciously.

Domaine la Maurerie in St. Chinian was a new name for me. The 2009 had a ripe nose and palate, but was just a touch jammy on the finish.

Les Vignes Oubliées 2010 – Another wine from the Terrasses du Larzac, with 60% Grenache, and 20% each of Syrah and Carignan. Medium colour. Quite perfumed, fresh fruit on nose and palate. Raspberries and other fruits rouges. Medium weight and an elegant finish. I like this a lot – and the name is beautifully evocative.

Le Chemin des Rêves was another new name for me. They are in Pic St Loup. I liked their 2010 Abracadabra red, a blend of 50% Syrah with 40% Grenache and 10% Carignan. Good colour. Ripe rounded fruit, with some leathery notes, and some fresh raspberry notes. Balanced and ripe.

As well as Domaine la Maurerie, there were several other offerings from St. Chinian.

Domaine Pech Menel gave us a vertical tasting of six vintages back to 2002. The 2002 had benefitted from some bottle age, while the 2009 had some ripe spicy notes.

Domaine les Eminades did not show as well as I expected. I am not sure why. I think I liked their white wine best, a blend of Grenache Blanc and Marsanne, with some white blossom and ripe fruit. 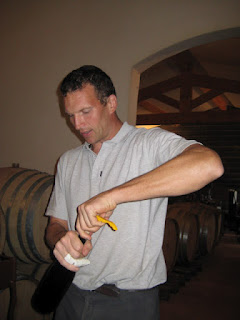 Xavier de Franssu from Mas de Cynanque was there too – see a posting from last summer and the wines were showing very nicely. His 2009 Fleur Rouge had some ripe spice, while the Plein Grès was more structured, again with good fruit.

Olivier Pascal from Domaine des Terrasses de Gabrielle explained that while his cellar is at Capendu, his vines are at Berlou, which is one of the crus of St. Chinian, but he seemed only to make Languedoc or Pays d’Oc.

Lidewej van Wilgen from Mas des Dames is in Murviel les Beziers so on the edge of St. Chinian. Her wines were showing beautifully – see an earlier posting for more details. 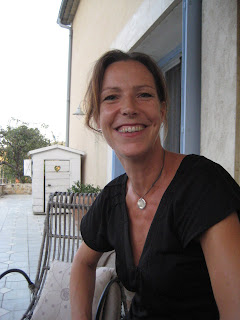 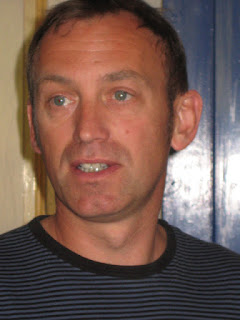 Some one else who deserves to go far is Gavin Crisfield – again see a recent posting. His 2009 La Traversée was showing beautifully, with lots of potential.

Pézenas was represented by Domaine les Aurelles – I tasted all Basile St. Germain’s wines at Vinisud so am planning a post dedicated to them, rather than dumping them in the crowd.

And down the road there was Domaine Turner Pageot, with particularly good whites, La Rupture. From Sauvignon, and le Blanc, from Marsanne and Roussanne, as well as reds, Carmina Major and le Rouge. Manu Pageot is a careful and talented winemaker, with his wife Karen. Again I have written about them before. 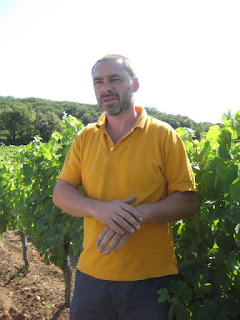 A new estate is Domaine Sainte Cécile du Parc which is just outside Pézenas. Christine Mouton Bertoli’s first vintage was 2009 and her wines are very much work in progress as she gets to grips with selection parcellaire and so on. I promised to go and visit. So more anon. 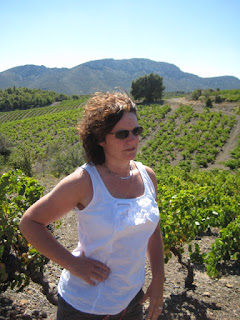 And also from Roussillon was Domaine Modat with Philippe Modat, who I visited last summer. – again another previous posting. 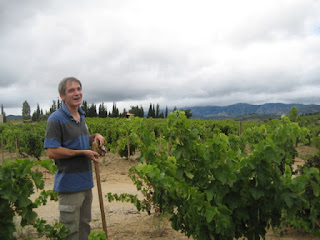 New to me was a lovely Fitou estate, Château Wiala with Wiebke Seubert.

2009 Rebelle, Fitou
55% Carignan, 40% Grenache Noir, 5% Syrah. All in cement.
I liked this a lot. Some elegant spice on the nose, and a certain freshness on the palate, balancing the ripe fruit. Lovely balance.

2009 Harmonie, Fitou
47% Carignan, 40% Grenache Noir, 13% Syrah. The Grenache sees no wood; half the Carignan and all the Syrah are aged in wood. And the wine had a good colour, with some firm leathery notes on the nose, and some ripe, more rounded fruit on the palate. Rounded and satisfying and still very youthful.

2007 Domino, Fitou
45% Carignan, 35% Grenache Noir, 20% Syrah. The Carignan and Syrah go into oak, 400 litre new barrels, but not the Grenache. Medium colour. Quite solid, rounded firm fruit. And on the palate, warm and leathery, with ripe fruit and a rounded finish.

Wiebke explained that her first vintage was 2001; she began picking on 11th September .... She has nine hectares of vines at Tuchan and has moved towards biodynamic viticulture, but does not say so on the label. It all promised well.

Domaine les Aires Hautes in the Minervois, at Siran,and includes vineyards in La Livinière for the cru. 1992 was the first vintage of this estate.

Three wines from La Livinière were all quite chunky and raisiny, rich and warm, and there was also a Malbec, Pays d’Oc, from 70 year old vines, with some sturdy but fresh fruit.

The tasting also strayed into the Gard, with a Costières de Nimes estate, Château d’Or et de Gueules at St. Gilles on the edge of the Camargue.

There were four different reds. An easy Syrah Pays d’Oc; a more solid 2009 Costières de Nimes from almost pure Mourvèdre, la Bolida, which was quite dense and meaty; Qu’es Aquo, a pure Carignan from 100 year old vines, with some sturdy fruit, lots of character, and good complexity and 2010 Trassegum, a blend of 50% Syrah, 25% Mourvèdre and 25% Carignan, with rounded ripe leathery fruit.

And last, not least was Mas d’Amile. Amélie d’Hurlaborde was pouring her 2009 Vieux Carignan, Pays du Mont Baudile. Deep colour; quite a ripe nose and on the palate some lovely berry fruit with a firm backbone. Very garrigue. Nicely balanced. Again see a previous post for more details.

And I left on a positive note of optimism. There are indeed rising stars in the Languedoc. 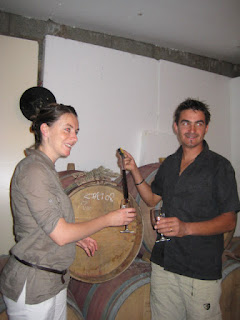