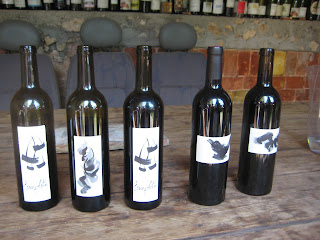 I had fun this morning and went to Montpeyroux for a cellar visit with Ivo Ferreira from Domaine de l’Escarpolette.   I had tasted some of his wines at the Montpeyroux caves ouvertes day, - see my earlier posting – but it is always more satisfying to taste with a vigneron chez lui in his cellar.   I first asked Ivo how he landed up in Montpeyroux – ‘le hazard’ was the short answer.  He was born in Oporto and came to France when he was fifteen; he worked in restaurants in Paris, including a rather smart two Michelin star place  where his interest in wine was kindled.  And then he wanted to do more, so after a vintage in the Jura, he spent year at La Tour Blanche in Sauternes.  By this time he was married and his wife’s cousins have Château le Puy in the Côtes de Francs, so he worked there for five years.  And then it was time for a change.  He found a job managing a wine estate in St. Jean de Fos and meanwhile developed his own vineyard, finding a house with a cellar to rent in Montpeyroux as well as five hectares of land, in nine different plots, around Montpeyroux, and the adjoining villages of Arboras, St. Saturnin, St. Jean de Fos and Lagamas.   He has plots of Carignan, Cinsaut, Syrah, Grenache, Merlot, Macabeo, Muscat and Grenache blanc.  But for one three year old plot, the average age of his vines would be 60 years old.

His cellar is the traditional village cellar, that every wine grower had before the cooperatives were created, on the ground floor of the house, with large concrete vats, and a small barrel cellar out the back in the garden.   One of the vats is dated 1920.  Swallows return regularly every spring, so he has to leave the back door open.  And his elderly ginger cat made it clear that he thought that we were intruders.  Ivo’s first vintage was 2009.  He favours short macerations, seven to ten days, and wants gentle extraction, so no pigeage or remontage.  He also picks his grapes when they are perhaps not fully ripe, but that makes for freshness in his wines, with an underlying elegance and minerality. 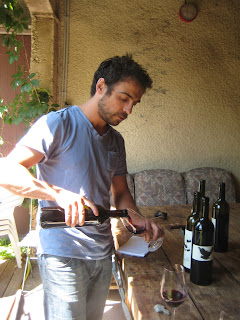 Some of these wines I had tasted earlier, but it never hurts to revisit so:   All Ivo’s wines are Vin de France.

2011 Le Blanc - 18.00€
Half Macabeo and half Muscat à petits grains.  An orange wine, in that it is fermented for ten days on the skins, but not with the stalks.  There is a two week gap between the harvest of the two varieties.   No so2 is added and the juice is initially free run, coming from the weight of the grapes.    I found lots of intriguing nuances, notes of ginger, some spice, some nutty notes, some oxygenation.  Not tannic despite the presence of the skins.   Very good acidity, with a fresh finish.   The wine was nicely mouth filling, without being heavy, with a fresh finish.    This is quite a different process from a pre-fermentation  skin contact for a few hours at a low temperature.

2011 La petite Crapule – 13.00€
The name translates as the little rascal.  An observation perhaps on how Carignan is perceived in the region.  Young Carignan vines, that is to say about 30 year old vines from a vineyard at Lagamas.  Picked quite early, with lovely refreshing dry cherry fruit.  Medium weight; elegance and minerality.  And relatively low alcohol, especially for the Languedoc. Fermented by carbonic maceration, but only for ten days, so the carbonic character is muted. 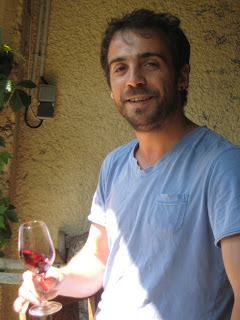 2010 L’Escarpolette – 16.00€
60% Cinsaut and 40% Carignan.  10 days carbonic maceration. Quite firm spice on the nose; quite rounded and denser than la Petite Crapule.  A stony note of minerality.  More body with some fresh fruit; riper and more textured.  Minerality on the finish, with a fresh finish.

2010 Les Vieilles – 22.00€
Les Vieilles refers to 70 year old Carignan vines, from a plot at Arboras, where the soil is marnes bleues and limestone.  Relatively early harvest at the beginning of September.  Ivo did a micro-vinification for this, in a fibre glass tank, rather than using one of the larger concrete vats.  The wine is  given a ten day maceration and then transferred into used demi-muids for 18 months.  There is a  regular bâtonnage so that the lees have virtually dissolved by the end of the élevage.
A touch of oak on the nose, but the fruit fills out.  It is rich, but not heavy, with velvety notes and some fresh acidity and lovely cherry fruit.  Ivo explained that he made this the same way as he made Château le Puy when he was working there.  A great future.

2010 Merlot
Quite intriguing and very different from the usual perception of Merlot from the Midi, which I do not usually like, when it is rather jammy and heavy.  This had some spicy cherry fruit with some tannin, but somehow had quite a different range of flavours from the Midi grape varieties. 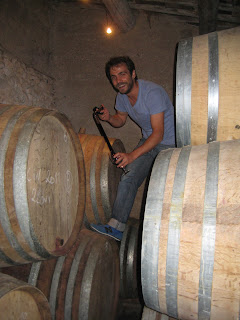 Then we transferred to the tiny barrel room, and Ivo climbed nimbly over the barrels to reach inaccessible wines.  There was the future 2011 l’Escarpolette with a veritable explosion of fruit, spicy orange perhaps.  A pure Cinsaut was redolent of fresh red cherries, with a mineral note.  Carignan was quite ripe and fleshy, with some lovely fruit – with a note of spicy cherries, I initially thought of Grenache.  The 2011 Merlot was quite rich and concentrated.

And we finished with a tasting of 2007 Château le Puy, Côtes de Francs – 80% Merlot and 20% Cabernet Sauvignon.  I always find it quite difficult tasting Bordeaux blends in the Languedoc, but this had some lovely supple fruit, and again was made with a short maceration and a long élevage.

Altogether a great visit.  Ivo deserves to do well.  He has a thoughtful discursive approach, not to mention some obvious talent.

Ivo in his cellar with the traditional concrete vat and his invention of a destemming table.  You push the grapes through the holes. 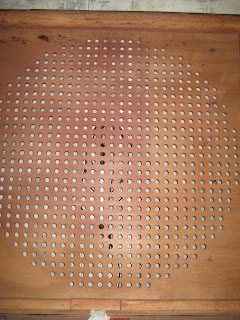 Juliet said…
Enjoyed your post Rosemary. I've tasted Escarpolette 2010 and liked it, particularly for the streak of minerality you mentioned. Presume this comes from the terroir and is accentuated by early picking. Will have to try the Merlot too. Like you, I don't think much of most Languedoc merlots but am happy to be proved wrong on occasion!
18 July 2012 at 10:41

ivo de l'escarpolette said…
thank you for your visit and we hope to see you soon without your notebook. it was a pleasure to receive you!
26 July 2012 at 13:50