I’ve just spent an intensive week with my friend and colleague, Tim Atkin, visiting wine cellars in the Languedoc,  from the Pic St. Loup to La Clape, taking in Montpeyroux, St. Chinian and Faugères as well as a couple of wine growers near Pézenas.   There were some new discoveries, and we visited some more established wine growers, some whose wines did not necessarily live up to their reputations, and others whose wines deserve a wider recognition.    And we finished on a high note, at Domaine les Aurelles outside the village of Nizas.   Why these wines are not imported to the UK is beyond me.   They undoubtedly merit a wider audience – the reds are beautifully elegant and the white Aurel must be one of the great white wines of the Languedoc. 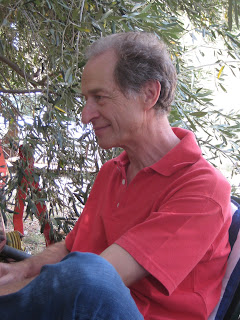 Basile St. Germain comes from Lorraine; he trained as an architect and landscape gardener and then turned to wine, and spent two years as a stagiaire at Chateau Latour in 1984 and 1985.  As he said, it was a great apprenticeship.  His wife Caroline comes from Cognac and for a while he worked there, before coming to the Languedoc in 1995.   He has nine hectares of vines, and a spacious cellar, built in 2001.

Basile’s red wines are original in that they see no oak; instead they are aged in steel  vats for four years before bottling.   The vats are shallow and wide, allowing for a large cap of grape skins, and natural extraction.   Basile observed that he follows the methods that he learnt in Bordeaux, favouring minimum intervention, maybe a few remontages, and long macerations.

We tasted outside under the shade of a large olive tree.

2008 Déella – 12.50€
A blend of Carignan and Grenache, with some berry fruit and some leathery notes.  Balanced and youthful with some fresh fruit.  Good balance.   In  some instances Basile also gave us tastes of the same wines, opened two days earlier for comparison, and an indication of ageing potential, but for simplicity’s sake I’ve combined my tasting notes.   He explained how he had picked earlier than usual in 2008, as it had hailed the week before the harvest, and there was a fear of more rain damaging the grapes, so  the alcohol level is a modest 12.5˚.   The wine was given three years, élevage in vat.

2009 Déella – which will be bottled in January 2013.  It is not made every year.  14.5˚  A blend of Carignan, Grenache and a little Syrah.  Quite a firm nose, with a rounded palate; quite a fleshy ample mouthful, with good fruit and very silky tannins, combining elegance and concentration.  Basile said that the work in the vineyard was responsible for the silky tannins, and you sense that he is a man who pays enormous attention to detail. 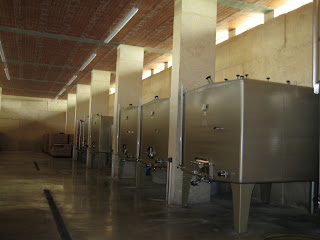 2007 Solen
A blend of Carignan and Grenache.  Basile called Solen his homage to Carignan, observing that he wanted Carignan in his vineyards as culturally it is the grape variety of the Languedoc.  He also described the Languedoc, very aptly I thought, as a sleeping beauty.   But he does not want to make a pure Carignan as the focus of the Languedoc lies in blends, but Carignan should be the dominant grape variety.    Again no oak; the only red wine he aged in oak was his 1995 Aurel, and he has never liked the wine.

This Solen was quite solid a rounded with ripe fruit on the nose; elegant tannins giving backbone, quite cassis on the palate, with a certain density, combined with elegance.  Basile observed that barrels do not suit the wines of the Languedoc – and I think I am inclined to agree with him.

2008 Solen, Pézenas  - 18.00€
Fresh cassis and herbs on the nose, with some leathery hints.  Rounded supple palate with  spice and lots of nuances.  Lovely and supple and elegant.  From 2008 the vineyards of Les Aurelles come within the cru of Pézenas.

2009 Solen  - ex vat.  Again some lovely ripe cassis fruit, rich but elegant with silky tannins.  In 2009 the Carignan gave particularly good results.
Basile observed that his great problem is that he has no method, especially when he doing his assemblages;  Francois Pennquen, a new name to me,  is his oenologue.

2010 Solen, again a vat sample.  Youthful fruit, berry fruit, spice with a touch of pepper and a firm backbone of tannins.  Some ripe Grenache cherry fruit.  Some lovely elegance.  Basile felt this had great potential:  2010 is a great vintage for him.  But apparently this wine was rejected at one of the labelle tastings for a lack of matière – what rubbish! 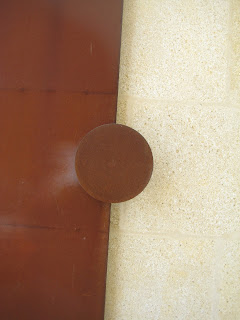 And then we moved onto 2007 Aurel, a blend of 65% Mourvèdre, 20% Syrah and 15% Grenache Noir.   It has more depth and structure with some fleshy ripe fruit from the Mourvèdre.  There is also a slightly viandé note in the best sense of the word , with plenty of nuances and a certain structure.  25€

2005 Aurel.  Quite a deep colour.  Smokey notes ,with some elegant cedary fruit.  A fine elegant tannic streak.  Nuances of red fruit with elegant cedary notes and a frim finish.  Evolving beautifully.  And will continue to do so.

2008 Aurel – ex vat
Quite ripe and rounded.  Ripe cassis and fresh fruit.  Belle matière.  Very silky tannins.  Lovely texture. And a long finish.  Basil observed, and I agree, that a grand vin should have a long finale.  It’s fundamental to quality. 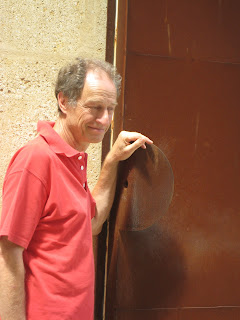 Deep young colour.  Quite rounded ripe cherry fruit.  Youthful tannins.  Very elegant.  Promises very well, but will not be bottled until 2014.  Basile is adamant that a long ageing suits his wines, allowing them to make themselves, for wine changes more slowly in a larger container, rather than in bottle.

And then we went onto the white Aurel , which fully justified its reputation as one of the great white wines of the Languedoc.  It is pure Roussanne.  The wine spends 12 to 18 months in 350 litre barrels, and then 12 t o18 months in tank.  Malo faite.

2010  Light colour.  Some oak on the nose, hardly surprising for a young wine, but the palate is rich and fleshy, with lots of nuances, I got fennel, white blossom and oak.   Basile explained that Roussanne is very tricky – the yields are tiny, as the grapes are small and do not provide much juice and it can be quite capricious to vinify.  The only skin contact is in the press and he does some bâtonnage but not pour le gras but to keep the lees in suspension and to avoid adding SO2.  He does not have any Marsanne – it does not have the elegance of Hermitage in the south – and its yields are pretty high.  Roussanne is so much more complex; he prefers to concentrate on that.

2009 Aurel – In bottle but not  yet for sale.  Light golden.  Quit ripe, honeyed and rich.  Lots of nuances.   Some herbal notes.  Lovely mouth feel.  Quite delicious.  Lots of potential.  My tasting notes simply do not do justice to the wine.

2008 Aurel -  Light golden.  Quite honeyed on  the palate.  Less mature on the nose than 2009.  Again lots of nuances with herbal notes, and more restrained that 2009.  White flowers, and elegance.  Wonderful depth and length.  And great potential.    48€  But is that so expensive if you make comparisons with Château Beaucastel in Châteauneuf-du-Pape??

2006 Aurel - An easier vintage and more forward.  Light golden.  Again lots of nuances, but needed to breathe, to lose a slightly oaky note on the nose.  Quite ripe fruit, and fatter with more weight on the palate.

2001 Aurel – which has been opened for a few days.  A mature, evolving nose with  extraordinary depth on the palate.  And here I seem to have run out of superlatives.   Basile observed that the great difficulty with whites in the south is to keep the freshness in the wine.  He has succeeded remarkably well.    So will someone please import his wine into the UK. 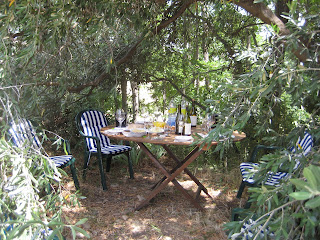 Unknown said…
They do have a UK importer (just the one so far), Terroir Languedoc, based in Skipton: http://www.terroirlanguedoc.co.uk/terroir/
1 August 2012 at 11:59

Rosemary George MW said…
I have just heard that Terroir Languedoc has not placed an order since 2008, so they do not consider that they do have a UK importer
29 August 2012 at 18:29

Bastien said…
François Pennequin, Les Aurelles' oenolog, is involved in many other interesting wines in Faugères, St-Chinian... a few of which have been reviewed here. Perhaps you should pay him a visit too !
3 May 2013 at 14:04

Carina Olofsson Gavelin said…
Dear Rosemary
I do follow your blogg and appreciate your comments on the wines of the Languedoc-Roussillon very much. Since I visit the area in April I have a question about a vineyard.
Do you recommend a visit to Domaine Les Aurelles? I will go to Languedoc with a group of wine tourists and I want the visits to the vineyards to be as memorable as possible for my guests.
Kind regards
Carina Olofsson Gavelin
Email:info@gavelinwine.com
12 February 2019 at 16:05