An estate on the Massif of la Clape that has created a fine reputation over the last ten years or so.  It is owned by Jean Paux-Rousset.  He inherited it from his mother in 1992, and until then Négly had simply produced bulk wine, mainly rosé, from Carignan, Aramon, Alicante, Terret – this how the Languedoc used to be.   And there were just three hectares of Syrah.  From fifty hectares the property has now grown to 65 hectares, which is pretty big for La Clape.   First the vineyard was renovated, with a lot of replanting, and then they developed the cellar and now the third phase is underway to restore the chateau and also set up their own bottling line. 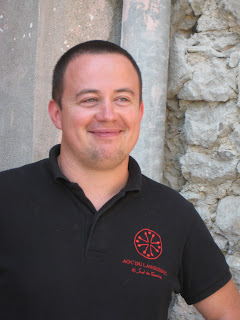 We met Didier Lacreu, the young cellar master, who has been making the wine at Négly since 2007.  He has a welcoming smile and is passionately committed to his work in the cellar.  Claude Gros is their consultant oenologist.  Didier explained how the vineyards at Négly constitute a mosaic of different soils.  Syrah is their main variety with 25 hectares and they have 15 of Grenache, eight of Carignan and seven of Mourvèdre, as well as some white varieties, Bourboulenc, Roussanne, Marsanne and Clairette.

2011 Domaine de Négly l’Oppidum, Pays d’Oc, Sauvignon. – 6.60€
The grapes come from a rented vineyard at Colombiers, planted on sables calcaires.  Quite ripe, pithy Sauvignon nose.  Quite firm green pea fruit.  Very explosive fruit.  Very good acidity.  Handpicked and brought to Négly for vinification.  The grapes are sorted and chilled for 48 hours as they arrive at about 27ºC, even if they are picked in the very early morning, in late August.  Fermented in stainless steel, and bottled in December.

2011 La Brise Marine, la Clape – 8.50€
Didier described this as Négly’s classic.  70% Bourboulenc and 30% Roussanne  Quite a salty nose, with some white blossom.   Also an intriguing honey perfume nose, with some hints of lemon.  ça citronelle, said Didier.  This wine is vinified in the same way as their Sauvignon, and was picked on 20th August. A fresh pithy finish.

2011 La Falaise Blanche – 15.00€
Tasted from barrel; will be bottled before the vintage.  A touch of oak and fennel on the nose; some oak influence on the palate and very good acidity.  With a fresh sappy quality.  You have to give the wine tension, apporter la tension observed Didier.  And he admitted that this particular barrel was pure Petit Manseng, which had been planted ten years ago.  Again it was picked in August, on 25th.

Next came a second barrel of Petit Manseng – a 500 litre barrel, with some intriguing fennel notes, and then a barrel of Marsanne, which was rich and buttery, and seemed quite heavy after the Petit Manseng, with a good streak of acidity and touch of honey.   Officially la Falaise is Roussanne and Marsanne, in practice it is 60% Petit Manseng and 40% Marsanne. 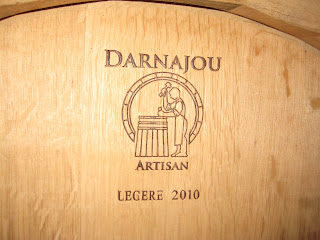 2011 Rosé l’Ecume, - 5.00€
60% Syrah – 40% Grenache – picked early September, to reduce the yield for their red wines down to 25 / 30 hl/has and treated like their white grapes, cooling them before fermentation.  Pale orange pink colour.   A bit too bonbons anglais for my taste.  Some acidity on the palate.

2011 Les Embruns, rosé – 8.00€
95% Syrah with some Grenache.  A selection of the better juice.  Pale orange pink.  A more delicate nose with a touch of raspberry.  Quite firm and dry on the palate, with fresh acidity.  More elegant than l’Ecume.

2010 La Côte, Languedoc – 8.00€
Deep colour.  Rounded rich nose ; perfumed, leathery, quite sweet fruit, a touch of cassis and other black fruit.  A leathery note on the finish. 50% Carignan, made by carbonic maceration, with 25% Grenache, 10% Syrah and 15% Mourvèdre. Carignan provides the base; Syrah the structure with some spice from the Mourvèdre and body from the Grenache.

2010 La Falaise, la Clape – 15.00€
This represents the bulk of their production with 70,000 bottles.  55% Syrah aged in 300 litre barrels, with 45% Grenache fermented in a 55 hls oak vat.  Grenache does not like the oxidation that comes from a barrel.  Good colour.  Quite a ripe tapenade nose. Ripe sweet fruit.  Rounded, cassis and black fruit.  Very rich, multi-layered and quite a ripe alcoholic finish.  Didier called it the soul of Négly.

2007 l’Ancely – the old name for Négly.
85% Mourvèdre which spends 24 months in demi-muids with with 5% Grenache and 10% Syrah.  Including some 50 year old vines.  Each vinified separately.   Very ripe viandé and spicy notes on the nose.  A palate with lots of layers and texture.  Quite perfumed, a smoky note; elegant tannins.  A lot of character.  Quite a dry leathery note on the finish.  The Mourvèdre was not picked until 27th – 28th October.

2008 L’Ancely – 55.00€
Deep colour.  Quite dry chocolate notes. And some smoky notes.  Very chocolatey, sweet, ripe and oaky on the palate.   Very intense, dense and smoky with a tannic streak.  How will it age?   A different blend fro the 2007 – 50% Mourvèdre, with Syrah from two different vineyards, half la Porte du Ciel, and half Clos des Truffiers, neither of which la Clape. 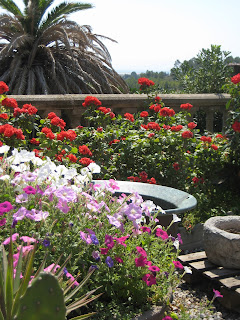 2008 la Porte du Ciel, Coteaux du Languedoc – 82€
Almost pure Syrah, with a splash of Grenache.  The block was planted in 1993, but yields are very low – 15 hl/ha as the vines have court noué, which affects the yield but not the quality of the fruit.  The vines are close to Negly, but their altitude is too low for them to be part of the appellation of la Clape.  Very deep colour. Very intense, firm ripe palate.  A certain tannic steak.  Lot of nuances and depth.   The grapes are cooled for 48 hours before fermentation, and  sorted grape by grape,  and the wine goes into  new barrels for 30 months.  1997 was the first vintage of la Porte du Ciel;.  The wine developed in the glass; it is rich and powerful, very intense, with acidity and tannin, as well as a leathery note. Didier explained that they work with their cooper to obtain a chocolate, mocha, coffee effect.  Their usual cooper is Darnajou in Montagne St. Emilion.  They admit to 15º on the label.   I wondered how it would age – and frankly, although it is made with immense attention to detail, and in its way you cannot deny that it is a fine wine, I really felt that it was not for me.

2009 La Porte du Ciel.
Again pretty much pure Syrah, with 30 months oak ageing.  Once the wine is in barrel, they top up, but do not rack.  I found this fresher, more restrained, and more elegant, with some firm tannins.  Didier explained that they also have a new cooper from Austria, whose oak adds tension to the wine.

2008 Clos des Truffiers, Coteaux du Languedoc.  92€
This is a plot of Syrah, planted in1963 by M. Paux-Rousset’s father near St. Pargoire, to the north east of Pézenas.  Yields are tiny, a fraction of what they were when the vines were first in production.  Didier said 25 tons per hectare as opposed to 3 – 5 hl/ha nowadays.    The grapes went to the village coop for 30 years.  And then in 1992 Mr. Rousset decided to do something with his father’s plot, beginning by restoring the vines to optimum condition, so that the first vintage was 1997.  The soil here is argilo-calcaire and very stony, and the vineyard is at 250 metres altitude.  They use the same barrels as for la Porte du Ciel.  Very deep colour. Solid dense chocolate nose; very intense solid tannins.  Lots of nuances and layers of flavour. Great depth.  Clos des Truffiers is more austere than la Porte du Ciel, and is there a taste of truffle on the finish.  There is a chêne truffier in the vineyard. 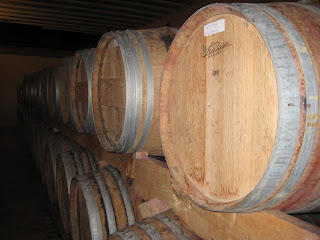 2009 Clos des Truffiers
Deep colour. Concentrated but drier nose.  The effect of the oak.  Quite a sweet note on the palate, with some firm tannins.  Just bottled and not yet very harmonious.  Needs to knit together.  A lot of body and weight.

2010 Clos des Truffiers.
Very deep colour.  Quite a sweet perfumed nose, the sweetness of young wine.  Ripe and sweet, with firm tannins and a smoky note.

And then Didier mentioned that they were working on a new cuvée, something even better to push the bar even further.  It would be Mourvèdre, with some Syrah, a blend of the vineyards of l’Ancely, La Porte du Ciel and Clos des Truffiers.  We were given a tasting of the potential 2011, which had even more depth, richness and intensity.... 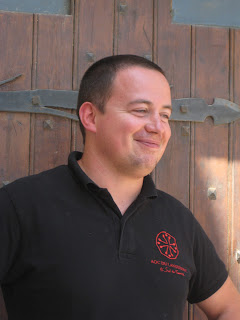 AlanM said…
I managed to taste some of the Brise Marine and Falaise this year, the workhorses if you like and was impressed by the wines especially the white. Not sure about the heavy oak and garagiste approach at all, it seems unnecessary and a vanity project to me, I presume people are willing to pay such prices for heavily worked wines??
31 August 2012 at 11:56

Rosemary George MW said…
I do rather agree with you. I like their white wines, but the reds, although well made, are simply too alcoholic and lack that essential refreshing drinkability. I suspect it is a stylistic decision that is driven by the owner.
31 August 2012 at 18:14