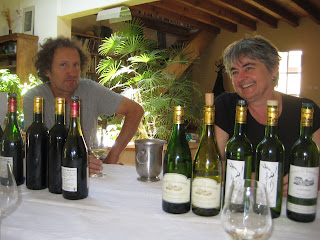 I first went to see Serge and Sylviane Martin-Pierrat at Château des Hospitaliers in the village of St. Christol, when I was researching The Wines of the South of France. Our paths have crossed a few times since, most recently earlier this year in London.  When are you going to come and see our (now not so new) cellar?  Sylviane wanted to know.  I said; give me a date.  So she did.  The cellar was worth the journey, as M. Michelin would say.  And it is a bit of a journey as we are in the western half of the Hérault, and St. Christol is almost in the Gard.  However, I could quite see why they wanted to show it off.  For a start Serge built it, having designed it with an architect’s help.   They wanted a cellar that would be easy to run and to work in – a cellar that would keep the wines at a correct temperature, especially during the summer, so that they can now age their wines correctly, and they also wanted a cellar that would not consume too much energy.  And that is just what they have.   They have used pierre du Gard, stone from the department of the Gard, and the same stone  that the Romans used to build the Pont du Gard.   The cellar is built into a small hillside, so that it is partly underground and cooling air is provided by a system of puits canadiens  (does that translate as Canadian wells?) – six pipes; 60 metres long;  3 metres deep, that bring cool air into the cellar, take advantage of the tempering effect of the earth’s temperature, a fairly constant 13ºC .  There is a corridor around the main body of the cellar, which also helps provide insulation.   The first stone was laid on 14th June 2004 and they were able to use it for the harvest which started at the beginning of September. 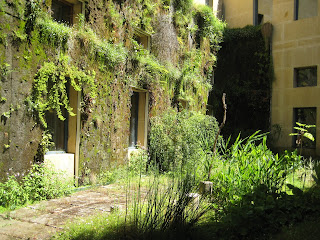 Everything works by gravity, so with minimal pumping and minimal sulphur.  All their grapes are handpicked; they have a sorting table and everything is destemmed.  The white grapes spend a night in a cold chamber, as it can still be very hot at harvest time.  Waste water is pumped into a pond of bamboos, as there is something about bamboos that helps with the re-cycling of used water.  Please don’t ask me to explain the scientific details, but I’ve seen this at another cellar.  Pigeage is automatic, with the necessary equipment on a rail above the vats. And they have a wonderful courtyard, in the heart of the cellar, as they wanted some natural light – it is a shaded garden, with the walls covered with plants, des murs vegetaux which help maintain a constant temperature and absorb the heat.  The roots are in the felt that is fixed to the walls; the plants transpire and help prevent hot air from affecting the cellar walls.  There is a pond in the middle of the courtyard with fish, which will eat any mosquito larvae.  Sylviane apologised that it was not looking as luxuriant as it had been – some of the vegetation had been badly affected by hard frosts in the spring. 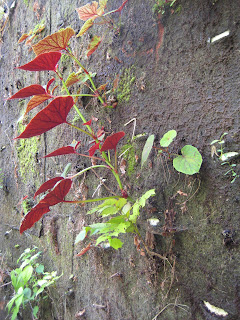 Their first vines were bought by Serge’s father, just four hectares. He was a teacher.  And they now have 32 hectares, around the village of St. Christol.  It is an attractive spot, with a view of the Pic St. Loup from the windows of the cellar shop.  And beyond are the hills of the Lozère and Mont Aigoual.  Fruit trees and olive trees break up the landscape of vineyards.  1981was their first vintage.   And altogether they make nineteen different wines, with about 21 different grape varieties at the final count .  Sylviane kept thinking of more –  here goes:  Roussanne, Vermentino, Grenache blanc, Viognier, which is now allowed in the appellation of Languedoc, but with a maximum of 10% -and for reds, Syrah, Grenache, Carignan, Mourvèdre, Cinsaut.  They have just planted some Picpoul Noir and Morastel, which are allowed in the appellation, in the interests of diversity.  Serge observed that we don’t know what the climate will be like in 20 years and both are resistant to heat.  They also have Chardonnay, Gewurztraminer, Ugni blanc, Merlot, Sangiovese, Pinot Noir,  And then there are three Muscats – petits grains, Alexandrie and Ottonel.  With that diversity of grape varieties they produce a lot of vins de pays, but maybe Vin de France will become more important.  The appellation, Languedoc, or the cru St. Christol, which will probably be incorporated into Grès de Montpellier, account for 30% of their production. 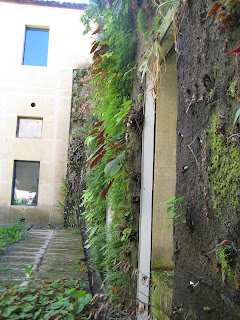 And they are wondering about planting Aleatico, as a dry wine, rather than making a passito as they do in Elba, and Serge would also like to try Touriga Nacional, but that is definitely not allowed.  But he thinks it would cope with climate warming, observing that the average temperature in the area has increased by 1.5ºC since 2003.  The amount of rain has not changed, but there is now more rain during the growing season.  2012 had a very dry winter.  Normally rain should fall in the winter and autumn, and you could count on a storm around 14th July and again on 15th August, to relieve any water stress, but not anymore.  It rained in June this year and then has turned into a very dry summer.  A heat wave is declared when the temperature reaches 35ºC for more than two consecutive days, as it did in 2003, 2006, 2006 and 2008.

And then we adjourned for a tasting, for a selection of their wines, not the complete range, but an interesting selection:

2011 Prestige blanc, Languedoc. – 5.00€
St. Christol is red and rosé.  The authorities reluctantly allowed rosé as part of St. Christol, but  as they are the only producers of white in the village, any white wine is Languedoc rather than St. Christol. A blend of Vermentino, Grenache blanc and Roussanne – all fermented in vat.  Light colour.  Delicate nose.  Light hints of white blossom.  Lightly rounded.  A slightly bitter note, but nicely so.  Delicate and harmonious.

2011 Gewurztraminer – Viognier  40% / 60% Vin de France.  6.00€
Gewürztraminer is now allowed in the Languedoc – not so long ago it was absolutely prohibited and any growers using it were very discreet about it, if you can be discreet with Gewurztraminer. Light colour; perfumed, spicy nose, some orange notes.  Quite peachy ripe and rounded on the palate.  Nice spice. Quite mouth filling.  Texture of Gewürztraminer , with a dry finish.  Serge observed that although the two varieties are quite different, they do compliment each others.  .

2008 Coteaux du Languedoc, Reserve. 7.70€
Mainly Roussanne, vinified in wood and blended with Grenache blanc and Vermentino, both  fermented in vat, and then all the wine spends 12 months in barrel.   Light golden; herbal oaky notes and a touch of maturity.  Also notes of evolution on palate.  Rounded with good acidity.  Good balance with satisfying mouth feel.  Crushed citrus fruit.  Serge observed that Grenache does not like drought; it can cope with heat, but it does need water.

2006 Coteaux du Languedoc – a vintage comparaison.  2006 was a hot year.  The Roussanne vines are 25 years old.  The nose is more evolved and more exotic, with good acidity on the palate with a touch of petrol, almost Riesling like.  Serge observed that people don’t really believe in white wines from the Languedoc; he thinks that the whites can keep better than the reds. I think he may have a point.

2011 Pinot Noir –Cinsaut  50/50 – 6.00€
Could this be the Midi’s answer to Pinotage?!  Both grape varieties picked at the same time; in this instance on 18th August and ferment together.  Élevage in vat.  Medium colour. Quite soft fruit on the nose, and a streak of tannin on the palate.  Can be served chilled.  Supple raspberry fruit and very gouleyant.    A summer wine.  Cinsaut gives freshness to the Pinot Noir, which can become a touch jammy and concentrated, while the Cinsaut makes for some elegance.

Serge observed how the creation of the appellations had resulted in the disappearance of many grape varieties– not so long ago there were as many as 74 different grape varieties in the region.  Instead the appellations gave credibility to the soil, or terroir.   Serge explained how complicated the soil is around St. Christol.  Theirs is alluvial soil, but two types, deposited at two different times.  The most recent is villefranchien, red clay with small stones, and then there are much larger stones that have comes from the Durance river, galets much more like those that you find in Châteauneuf-du-Pape. 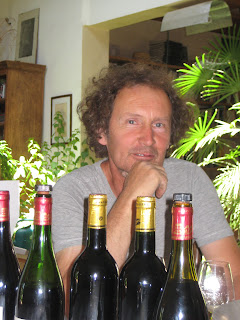 2011 Sangiovese Syrah – 75% - 25%  - 6.00€
Fermented and élevage in vat.  Quite peppery, with rounded ripe fruit.   Fresh cherry fruit.  Ripe with supple tannins.  Sangiovese is complicated as although its bud break is early, it ripens late.  Serge has also tried Nebbiolo but that was difficult, even more complicated than Pinot Noir, and very tricky in the vineyard.  And he has planted Nielluccio, which is related to Sangiovese and grown on Corsica, especially for the appellation of Patrimonio.

2008 St. Christol – 7.70€
A hot vintage.  Mainly Syrah, with some Grenache, Mourvèdre and a little Carignan. 15 months in wood. Blended before élevage.  Quite ripe and supple with a streak of oak.  Quite soft fruit.

2007 – St. Christol. – 7.70€   A cooler vintage
Again mainly Syrah, with some Grenache.  Rounded nose; more smoky palate with a touch of liquorice.  More structured with a rounded finish and more depth of flavour.

2008 Selection – 10.30€
A blend of 3 different soils in their vineyards; the two kinds of alluvial as well as some sandstone with marl.  Mainly Mourvèdre with Grenache and Syrah.  Two years in wood.  Deep colour.  Quite a firm nose.  Tight with an oaky streak.  Quite solid and rounded with some soft tannins and nice fruit.  Needs some ageing.
I asked about the tipicity of St. Christol.  To which the reply was vivacity; a natural acidity in the wine.  You always get a low pH in an analysis.

There are four producers in the village, namely the coop which accounts for 20 – 30% of the production;  Domaine la Coste, which is quite a big estate owned by Luc Moynier, Domaine Guinand – he is also president of the coop,  and Domaine Bort, owned by an ex-president of the coop, as well a few small producers, but nothing very serious.  Serge called them vins de garage, but I don’t think he was comparing them with the bordelais garagistes!   Domaine Lacoste-Bellevue in Lunel also has some vineyards in St. Christol and there are quite a lot of people looking for vineyards.  St. Christol is a small village, with not even 1000 inhabitants.

And by now we had earned our lunch.  A delicious clafoutis aux olives, some brandade and home grown apricot tarte ..... 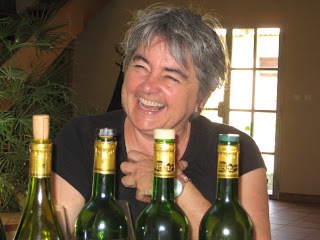 Unknown said…
Wow, sounds like a fine balance of complexities and a winemaker to add to the tasting list.

Btw, it is translated as a "Canadian well" -- Though I'm not sure if that's what Canadians call it. We have a Canadian architect friend who used one to great effect in Vancouver on a community centre facility, but I never heard him call it that.
25 August 2012 at 21:09