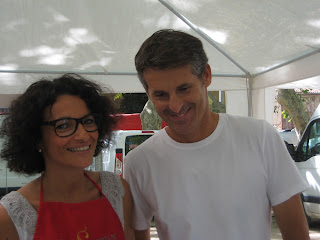 St. Chinian celebrated its 30th birthday this year, for it was made an appellation, along with Faugères, three years before the creation of the all-embracing appellation of the Coteaux du Languedoc, in 1982.  Every year on the penultimate Sunday in July, they organise a wine fair under the shade of the plane trees on the Esplanade in the centre of the town.  The wine growers jostle for place alongside the regular Sunday market – some forty of them altogether, along with producers of cheese, tapenades, saucisson, honey and so.  And the square was crammed visitors.  It was well nigh impossible to taste anything, but I did manage to say hallo to a couple of wine growers, Christine from Clos Bagatelle, who created me with a cheerful bise on both cheeks, and Nadia and Cyril from Domaine de Madura.  As luck would have it, there was nobody else at their stand, so it was possible to taste their wines in relative peace, and remind myself just how good they are. 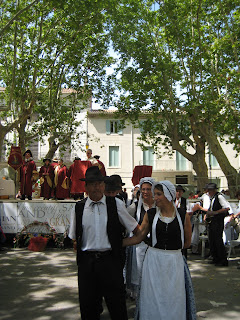 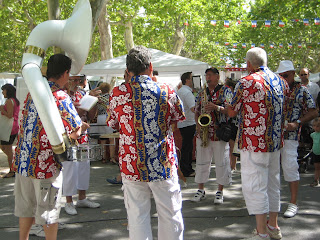 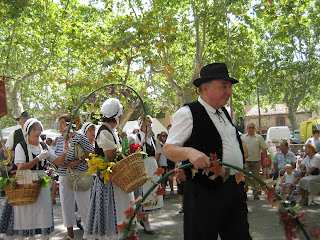 But my presence has also been requested by the Confrérie de des Chevaliers de St. Chinian.   They wanted to make me a Chevalier.  Just about every French appellation worth its salt has a confrérie, and not only for wine.   The St. Chinian confrérie arrived from church,  accompanied by other confréries; there was St. Andrieu from Beziers, rosé  de Bessan, Muscat de Frontignan, St. Saturnin, Faugères, and pink garlic from Lautrec and tartes tatins – I am not sure where they were based, but they had brought some for lunch, and I was also able to buy a beautiful string of garlic.   Everyone was wearing heavy velvet robes, more suited for a winter’s day, and they would have been deemed incomplete without a floppy hat of medieval design. 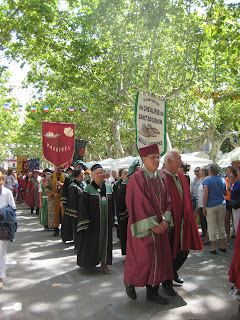 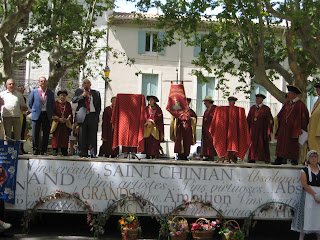 Any occasion like this demands speeches, so the mayor of St. Chinian had his say, as well as the president of the appellation, and there was another local politician adding weight to his words, reviewing the progress of the appellation and exhorting us to drink more of it.  A local band added to the jollity.  And there was country dancing. 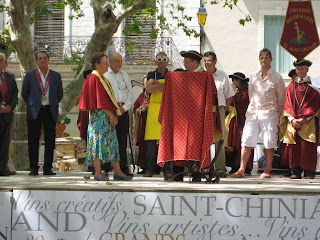 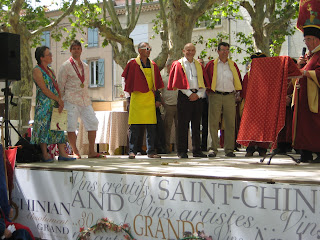 And then it was time to go up on the podium.  I was in good company, with a local restauranteur from nearby Cruzy, and four vignerons who were being made chevaliers in recognition of their services to the appellation – Alain Jougla from Domaine des Jougla was the most familiar name to me, and we greeted each other warmly.

My parrain, Jean Lacugue from Domaine Milhau Lacugue introduced me, turning my rather basic CV into something much more eloquent and I was given a glass of wine to taste – and then dubbed on both shoulders with a large vine souche in the name of Noah, St. Vincent (the patron saint of wine growers) and St. Aniane, hence the name St. Chinian.  And then it was the turn of the restaurateur. 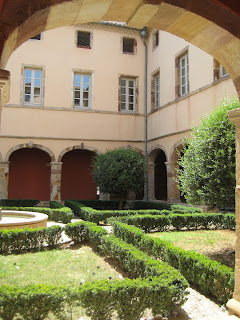 And of course no event like this is complete without lunch, so we adjourned to the cool cloisters of the old abbatiale.  The bottles flowed, rather like a Burgundian paulée.  Alain Jougla’s white les Tuileries was deliciously subtle and flowery; Chateau Cazal Viel’s rosé was delicate and fresh with rounded vinous fruit; 2008 Château Milhau Lacugue had some rich tapenade fruit; Mas de Cynanque was ripe and spicy with supple tannins and then my tasting notes seem to disintegrate completely.  We certainly did not have the energy to return to the fray of the fete. 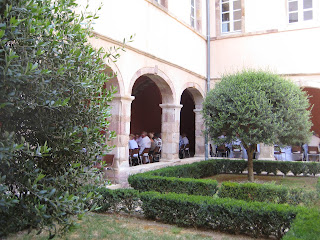 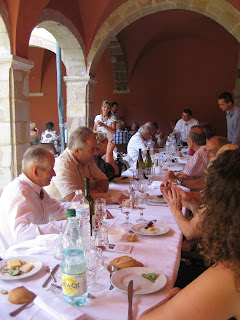 Warren Knowles said…
Only passed through St Chinian on my way to and from Roquebrun but did stop at that square to buy some wine!
3 August 2012 at 13:29