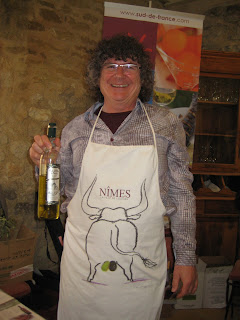 Another competition.  This one is fun.   Michèle Solans, a bright and lively PR girl invites women journalists, but not necessarily specialists in wine, to taste the medal winners from various competitions amongst the cooperatives of Languedoc-Roussillon.  I’ve participated in this competition before,  a couple of years ago.  This time it was held at the Pont du Gard and the previous evening we were invited to an olive oil tasting, with examples of olive oil from the various oil coops of the region.  Helene Pages and Jean-Marie Etienne from the olive coops of Clermont l’Herault and Beaucaire respectively conducted the tasting and it was fascinating.  We were told about various varieties of olives, Olivière, Rougette, Bouteillan, Picholine and Lucques and instructed in the differences between fruité vert – fresh and peppery  and fruité mûr – softer and more supple -  and then they produced a fruité noir that was rich and unctuous and un peu too much, as the French sometimes say. 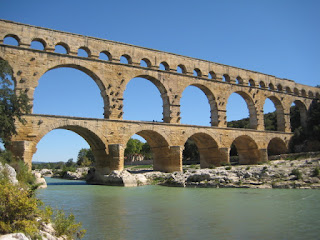 And the next morning we gathered at the conference centre of the Pont du Gard.  I was on a table of red wines, with  the arduous task of nine wines to taste, from which we had to choose our two favourite wines.   They were then tasted against the two favourites of the other red table, and the winner was chosen.  There was a table of rosé and a table for whites tasting at the same time.   It was all very amicable and relaxed.   My table went for a red wine from the coop of Fontès, la Fontésole in the Hérault, a Languedoc AC Prieuré Saint-Hippolyte, with some spicy peppery fruit, And a surprisingly fresh and lively Merlot from St. Quentin-la-Poterie in the Gard.  And from the other table came a Corbières, Cuvée Sextant,  from Ornaisons,  I found it rather oaky and ill-judged but some of my fellow judges liked it a lot so I was greatly relieved when the prize winner, which came from the other table, won by a whisker.   It was another wine from the Fontès coop, namely 2012 Fontésole, Les Larmes du Volcan.  The name is a reference to the extinct volcanoes of the area, with the scenery dominated by the Pic de Vissou.  Locally Fontès has a reputation for its rosés, but this competition proved that the technical director, Olivier Plut, has a knack for red wine as well as pink. 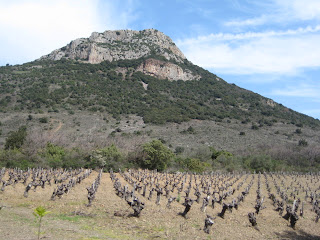 And the prize winning white and rosé came from the same coop, les Coteaux de Capimont at Hérépian.   Philippe Coste collected his rosé prize, thanked us profusely and observed that as he had won the red trophy a year or two ago, so all he needed now was the white trophy.  Little did he realise that he would be back up on the podium to collect a second trophy for the white wine a few minutes later.   The rosé was a Cabernet Sauvignon, Vallée des Arômes, Haute Vallée de l’Orb 2012 and the white 2012 Chardonnay, with again their evocative brand name, Vallée des Arômes, Haute Vallée de l’Orb.  Both amply illustrated the potential of the cooler Haute Vallée de l’Orb for fragrant refreshing wines, with aroma

And there were just three wines competing for the sweet wine trophy – three quite different in style, so really it was a question of stylistic preference – fresh young Muscat; richer more mature Muscat or a mature Ambré style.  I preferred the Ambré, but the vote went for the 2012 Dom Brial Muscat, which came from the coop at Baixas.

And then we adjourned for a leisurely lunch.  I was in good company, with Sharon Nagel who is writing a much-needed book on the Pic St. Loup – for more details see  www.terroirs-dexception.com  And Claire Vuillemin, who runs a website www.claireenfrance.fr   She was enthusing about a recent visit to London where she stayed at the newly opened Great Northern Hotel by St. Pancras Station.   Her site is definitely worth a look.
Email Post