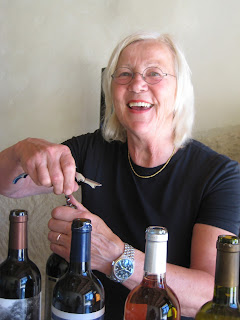 I never cease to admire people who turn to making wine in mid-life.   Béatrice Althoff is one such example; she and her husband, bought Domaine Costes-Cirgues in 2003.  They are German speaking Swisscouple and he actually works as a barrister in Alsace, so not the simplest of arrangements, but their son, David now makes the wine.  And very good it is too.

The estate is just outside the lovely town of Sommières, with its arcaded streets.  They looked for two or three years before they found it, 60 hectares of land with 10 hectares of vines, and a lot of neglected olive trees.  As Béatrice observed, it was a sleeping beauty, une belle endormie.  Indeed driving down the track through the woods to the cellar, you could almost imagine that you were in a set for the fairy tale.  Initially most of their vineyards were still committed to the local cooperative, so they did not make their first wine until 2005, and finally removed their vines from the coop the following year.  They have pulled up vineyards and bought some more vines and now have eighteen hectares,. There is Syrah, Grenache, Mourvèdre, some old Carignan and some Merlot, and for whites, Grenache blanc, and a plot of five varieties, Viognier, Roussanne, Marsanne, Vermentino and Muscat, and they still have a hectare of old Ugni blanc from which they sometimes make a sparkling wine.  A cellar was built in 2007.   With impeccable timing the builders finished the day before the harvest started in 2007.  It is a fine building, built into the rock, with the stone, pierre du Gard coming from a nearby quarry.   Inside everything is modern and streamlined, operating by gravity.  The hygiene is meticulous.  ‘We use lots of water, and check everything for bacteria’.

The key feature of the wine-making is that they use no sulphur at all.  In other words this is absolutely natural wine-making, but they do use cultured yeast rather than natural yeast, for the simple reason that indigenous yeast are not always very good.  Béatrice observed that natural yeast can be lazy, and that they can cause problems with brett.  If you use cultured yeast you know what you are getting.  Jean-Francois Vrinat advises; he also consults for some nearby Pic St. Loup estates..  And Béatrice  feels that by not using sulphur the flavours of her wines are smoother and more supple and that the fruit is different.  ‘It’s closer to the grape, as sulphur can combine with the flavours of the wine and make it drier’.  They follow the biodynamic calendar.  This year everything is late, at least three weeks late, with the flowering only just beginning in early June.  So far everything is very healthy, and despite the rain there is no mildew, as it has simply not been hot enough. 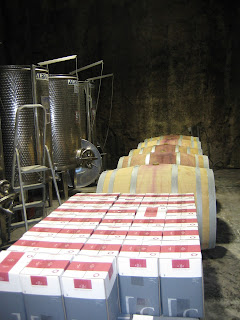 There’s a nice tasting area, where Béatrice  opened some bottles and we chatted with her and David.

2012 Font de Marinas, IGP Oc – 8.00€
A blend of 60% Grenache Blanc, 30% Viognier and 10% Vermentino.  There was no Muscat last year as that was eaten by the wild boar   Ageing in vat, and blending just before bottling.
Peachy nose, and ripe rounded peachy fruit on the palate.  Fresh with good acidity, but a curious note on the finish that slightly perturbed me, that I couldn’t quite identity.

2012 Le Point du Jour, Rosé, Languedoc  – 8.00.
Equal parts Syrah and Grenache.   The grapes are picked earlier than for their red wine, and pressed quickly, taking care to avoid any oxidation.  The palate is ripe and rounded, and nicely vinous and mouth filling, but with an elegant finish.

They are within the terroir of Sommières, but as yet there is no definite style of wine for Sommières.  The area encompasses about 13 villages, and touches the Costières de Nimes, but not the nearby Pic St. Loup.  For the moment about twenty producers who put Sommières on their  labels, but I suspect it lacks what the French call a locomotive.

2011 Montplaisir, Pays d'Oc  – 7.80€
40% Carignan, 25% each of Grenache and Mourvèdre and 10% Merlot.  Aged in a concrete vat.  Medium young colour.  I thought it was very Carignan, with some fresh red fruit, and certain rustic character.  Nicely peppery on the finish.  A lovely glass of wine.

2011 St. Cyr, Languedoc, - 11.00€
80%  Grenache, 20% Syrah  Kept in a stainless steel vat for six months.  Ripe cherry liqueur fruit and very Grenache. Rich and expressive, and ripe and fresh, with acidity and some tannin, and the fruit of the garrigues.  Although it was 15º, it certainly did not taste heavy and alcohol.  Béatrice observed that when the grapes are ripe, you automatically get a natural balance. 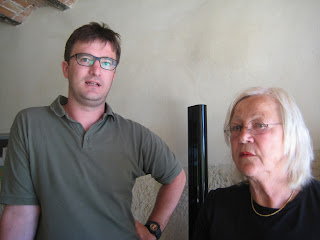 2010 Bois du Roi, Languedoc  – 14.00€
A cooler year than 2011, with less concentration and better balance.  One third each of Syrah, Mourvèdre, and Grenache.   18 months in vat, and just 5% in barrel, 400 litres barrels from the Tonnellerie de Mercurey.  This had lots of spicy peppery fruit and was fresh and elegant, with some lovely red fruit, and a satisfying balance of tannin and acidity and a lovely long finish.

2010 Château Costes-Cirgues, Languedoc – 18.50€
80% Syrah and 20% Grenache.  Only six months in oak, as the barrels were new.  And only about 60-70% of the wine went into barrel.  Since then they have taken to longer ageing,15 -18 months.  Deeper colour than the Bois du Roi.  Rounded, rich and spicy with a tannic streak, but you don’t taste the new wood.  They aim for a very gentle extraction, with some maceration and a soft pigeage.  The oak is very well integrated.   For the moment the wine is Languedoc rather than Sommières as what they consider to be their best plot of Syrah is not accepted as Sommières.

So in short, a lovely discovery and visit, prompted by their success at Signature Bio. 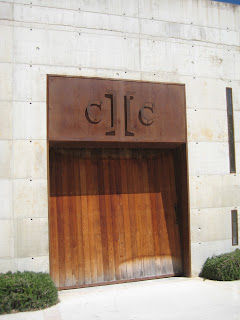