A summer party always provides the excuse to go and see our friends Caryl and Jan Panman at Chäteau Rives-Blanques and to stock up on Blanquette de Limoux.   We were pretty sure we wanted Blanquette rather than Crémant, but Caryl insisted that we should taste both before loading up the car.  And a fascinating comparison it was too.

2011 Blanquette de Limoux.  10.50€
It was very Blanquette, with that distinctive slightly bitter flavour of Mauzac.  The nose was quite rich with some honeyed notes and the palate provided a mouthful of flavour, some rich fruit and firm acidity.  It was packed with character and flavour, showing just how good Blanquette can be.  .

2010 Crémant de Limoux. – 11.00€
This spends longer on the lees and is essentially Chardonnay with Chenin, without any Mauzac and is altogether more demure.  The nose is soft and creamy and the palate rounded and subtle.   2010 was a very good vintage, while 2011 was difficult, but the sparkling wine grapes were picked before the rain.  And 2012 was a textbook vintage, with the weather behaving just as it should.

2010 Crémant de Limoux rosé – 12.00€
Might as well try all three, Caryl suggested.  This contains just 4% Pinot Noir, making for a delicate pretty pale pink colour.   The nose is nicely rounded and ripe, with some hints of raspberry, and even more so on the palate.  It is more powerful than a white Crémant, with richer fruit, and yet an underlying elegance.  Another lovely glass of wine.   But we stuck with our first choice of Blanquette.

Now, how about trying some Chenin?  Jan suggeste.  We could do a vertical tasting of Dedicace.   That was an irresistible suggestion as I love vertical tastings, and Caryl and Jan were dead chuffed as their 2012 had just been classified as a Grande Réussite by Revue des Vins de France.   We tasted from old to young, beginning with: 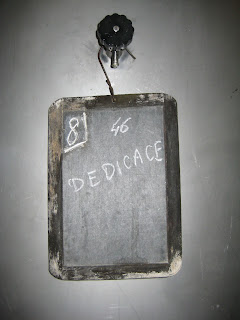 2008 Dédicace.  It was all fermented in oak, usually 5 – 10% new, and kept in barrel for about seven months.  Chenin is very sensitive to oak, so they start tasting the wine in January to see how it is developing.  There is no malo-lactic fermentation.  They have also experimented with Chenin in just stainless steel vats and loved the wine that they made that way  in 2011, but without oak, it is not Limoux, and so was demoted to vins de pays.  Stupid really.   Chenin is always the last grape to be picked, usually during the second half of September, into early October.    The yield is around 45 hl/ha.   2008 enjoyed a long flowering, with regular rainfall from March to June, and fine weather at the harvest.

This 2008 has a touch of oak on the nose, as well as some honey, making a lovely mouthful of flavour, with good acidity and a dry finish.   Quite rich, maturing fruit, with lovely texture.

2009
Fermented in oak, followed by seven months élevage.  8% new oak barrels.  A cool start to the year with 300 mms rain between January and April.  The yield was low as there was a lack of water in August, but the weather was good at the  harvest.

Light golden  colour.  Oak nicely integrated on the nose.  Quite a firm palate, rounded with dry honey.  Long and textured with good acidity.

2011 – A difficult year.  Dry youthful honey, and the oak still quite apparent.   Almost a hint of grapefruit on the palate.  Very good acidity.   Fresh and pithy.  Some honey to develop, but lighter in body than the others.

Jan remembered how they were ready for a perfect vintage and then on 3rd September 100 mm of rain fell in just one day.  The grape initially looked healthy and then after about ten days they suddenly realised that the rot was about to hit – so they quickly machined harvest and most of the Chenin went into their vin de pays.  Altogether it was a challenging year, with a capricious spring.  A warm April made for early flowering which was followed by a cool summer, so everything slowed down.

We were lucky; the wine had come out of barrel the previous day, and was due to be fined the next day, so a window of opportunity for a taste.  It will be bottled in June.  And I could quite see why Revue des Vins de France rated it so highly. It was rich and honeyed, fresh and youthful, with lots of intriguing nuances.  Very long with very good texture, good acidity  and a hint of oak,   It needs a year or so in bottle before showing at its best, and at this stage promises very well.

In short a great tasting. And why the name Dédicace?  Quite simply each vintage is dedicated to someone who has helped them in some way.   Le Bon Voisin in 2009 was their neighbour James Kinglake at Domaine Bégude, who came to the rescue with a piece of machinery at a critical moment.   George Pauli in 2010 was their consultant in the early days and 2011 is for the Vinifilles, the group of women winemakers, of whom Caryl is an enthusiastic member.