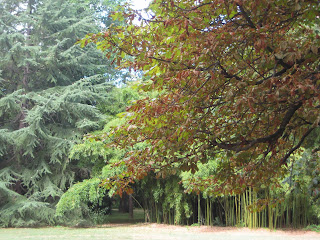 Château la Dournie is a fine property on the outskirts of St. Chinian on the road towards St. Pons.  Véronique Etienne had worked in sports PR and then took over the family estate from her father, about 20 years ago.  He had inherited it from his aunts.  Their vineyards consisted of lots of Aramon and a little Carignan, so her father invested a lot in the estate in the late 1950s and 1960s.  There are now forty hectares of vineyards all around the château, of which the oldest vines are 70 years old; most the rest were planted by Véronique’s father.   She only has schist, so none of the argilo-calcaire, or clay and limestone that is the other terroir of St. Chinian.  Ideally she would like to have more variety.   Another disadvantage of having all your vineyards in one big plot is the risk of hail; it can be a case of all or nothing.  The river Vernazobre flows through her property, and half her vineyards, those nearest the river are not St. Chinian, but Pays d’Oc.  They could equally well be Pays de l’Hérault, or even Pays des Monts de la Grage, but nobody would know where that is.  But Hérault is even more difficult to market. 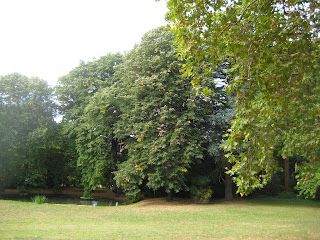 The château is an old family house, used for family reunions, but not lived in., with the result that the interiors have not changed much since the time of the aunts, and are a fine example of French interior decoration from the early 19th century.   And there are lovely gardens with mature trees, making it an idyllic spot.  You sense that Véronique is very attached to her heritage. She talked of maintaining the tradition of the estate, of the soul of a family domaine. Je utilise les vieilles casseroles - you make the best soup in an old pot.  However, the cellar has been modernised.  Stainless steel vats have replaced the old foudres, and there are now about a hundred barrels in an enormous cellar, with a wonderful beamed ceiling, that was built in the early 19th century. 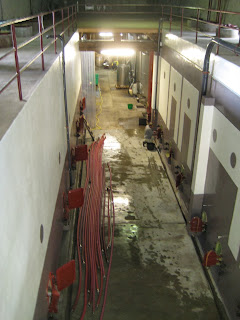 We talked about the Vinifilles, of which Véronique is a member.  She feels that the outsiders have done a lot to develop the Languedoc, and that the Vinifilles are very successful and effective in helping to promote the region.  They also seem to enjoy themselves enormously at tastings and you sense that there is a strong common bond between them. 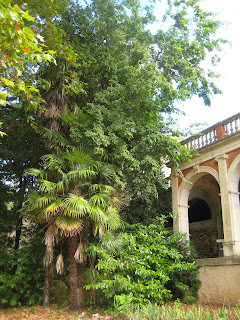 Véronique’s vins de pays are gradually changing.  Le Rouge de la Dournie is a blend of Cabernet Franc and Merlot.  Twenty-five years ago it was easier to sell Merlot than Vin de Pays de l’Hérault.  She also makes a Marselan Syrah blend and is gradually shifting towards Mediterranean varieties, and getting rid of the Merlot, but not the Cabernet Franc, as those vines are still too young.  For white varieties she has Roussanne, Vermentino and Viognier which were planted about eight years ago, and also some older Grenache Gris for St. Chinian. The grapes for the appellation wines are handpicked and the vins de pays mechanically harvested. 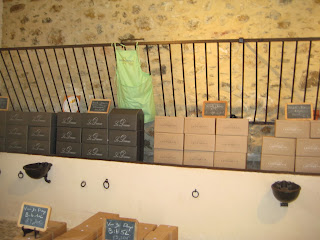 We tasted in what was once the old cowshed, now attractively white-washed, but retaining the old stalls.

2012 St Chinian Rosé - 6.00€
Syrah, Grenache, Cinsaut.  Lightly coloured. Delicate herbal nose. Light and fresh and quite rounded easy drinking.  Grenache and Cinsaut are pressed which makes for a fresher wine, with less alcohol, while Syrah is saigné.  Inevitably there is some skin contact during pressing, as Véronique does not have a pneumatic press.

2012 St Chinian Rosé, Léa - 9.80€
2012 was the first vintage of Léa.  It is a blend of Syrah and a little Cinsaut, entailing a selection of the best Syrah juice.  Half the blend is fermented in oak and stayed in wood until November.  The oak is very well integrated, leaving a satisfying mouth feel and finish.   Nicely rounded nose, with rounded fruit on the palate, and good texture and mouth feel.  Very satisfying.  An oaked rosé that works well. 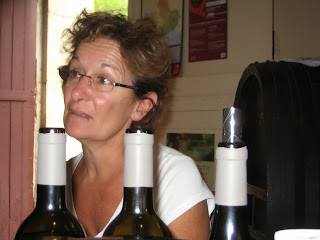 There was none of Le Blanc de la Dournie to taste, as it was sold out, so we went on to:

2012 Pays d’Oc blanc, Marie - 9.80€
The names of the various cuvées are all after various members of the family. Marie is Véronique’s daughter; Léa and Elise her two nieces, and she is planning Sarah, a late harvest wine, for another niece, and Etienne is, of course, the family name.   So Marie is pure Roussanne.  Light golden.  Leesy with a touch of oak.  White flowers, and more oak on the palate, but it is nicely integrate, with good weight and texture.  All fermented in fût, and it stays in fût until January.  Good balance but no great depth.   Véronique considers that Roussanne is the most interesting for ageing, rather than Vermentino and Viognier. 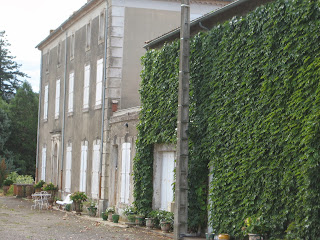 And now onto red wine:
2011 St. Chinian, Classique - 6.80€
The idea of the Classique range is to show the tipicity of the schist, with accessible wines, made with a classic vinification, with a 15 - 20 days fermentation.  Mainly Syrah with some Grenache and  Carignan.  Élevage mainly in vat.  Medium colour.  Spicy red fruit. Medium weight. A little minerality from the schist.   A tannic steak.  Nicely rounded, with a dry finish

2010 St. Chinian rouge, Etienne - 10.60€
Syrah, Grenache, Carignan.  A. blend of the best vats, and then into wood.  2010 was a small vintage, compared to the large vintage of 2011.  So the wine is more concentrated. There were no climatic problems in 2010. 12 months in barrel, but not new wood.  The wine opens up more slowly than the Classique, with a rounded nose and palate. Quite stony, with red fruit.  No obvious oak, so nicely integrated.  Véronique described it as the most severe of the range, with elegance and restraint, and also red fruit.

2010 St. Chinian rouge, Elise - 14.50€
Perhaps the least St. Chinian in character.  90% Syrah with some Grenache.  12 months in new 400 litre barrels, rather than bordelais barriques, for less oak impact.  The first vintage of both Elise and Etienne was 2009.  Quite a deep colour. Rich red fruit on the nose.  A rounded palate with a hint of vanilla., but again the oak is not intrusive.  The Syrah reinforces the character of the schist with some acidity and freshness; the schist adds a mineral note.  Good fruit and not heavy.

2011 La Dournie - 24€
Old Grenache vines, with a little Carignan, given 12 months in old wood.  Dournie is in fact the name of that particular parcelle. 2011 was the first vintage of this wine, and Véronique might make it again from the 2012 vintage; it all depends on how the barrels evolve.  Quite a deep young colour, with liqueur cherries and a touch of wood on the nose.  Very spicy palate.  Véronique admits that it is not very representative of St. Chinian, but the idea is to get people talking.  It is a delicious example of Grenache, reminiscent of more of Châteauneuf-du-Pape, but not too heavy or alcoholic.  Just 600 bottles were produced for this first vintage. I was lucky to try one. 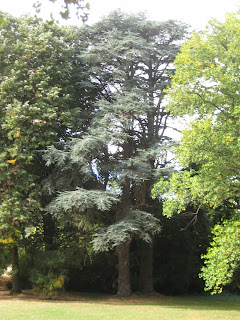 Alan March said…
I'm a big fan of Dournie wines, the classique is a bottle I regularly buy for weekend drinking. I was lucky enough to meet Véronique at the Maison des Vins in the village this summer and taste some of the range which I had not previously tasted. These need time in my view but I am confident of great rewards when I do open the,
3 December 2013 at 17:09

Leon Stolarski said…
Rosemary, you write that "the first vintage of both Elise and Etienne was 2009." I'm not sure who told you that, but I have been selling the wines of Chateau La Dournie for nearly 10 years now, including vintages of Etienne as far back as 1999 and Elise back to 2000. I wonder if something got lost in translation - I do know that the label designs were changed from 2009, so perhaps that is what was meant.

Incidentally, Etienne is invariably an excellent and very age-worthy wine, but Elise is something else altogether - especially when given the appropriate bottle age. I have presented both the 2000 and 2004 vintages at blind tastings in the past year or so, and on each occasion, virtually all of those present thought it was top-notch Cote-Rotie. Enough said.
18 December 2013 at 02:14