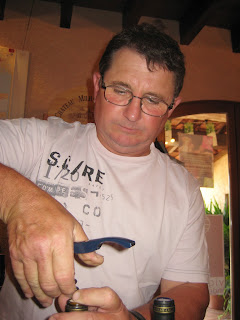 Jean Lacugue was my godfather when I was intronised into the St. Chinian Confrérie last summer, but I had not seen him chez lui since my research for The Wines of the South of France at the end of the last millennium!  So another visit was well overdue.  . 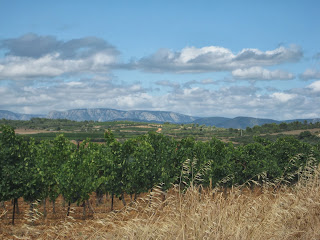 Milhau is a tiny hamlet between the village of Puisserguier and the enchanting ruined abbey of Fontcaude. First of all Jean took us for drive through the vineyards; he has 60 hectares of vines on the 100 hectare property.  He explained that the origins of the property are Roman, from the 1st century BC.  Villa Emilia became Milhau.  It is a wonderful spot, with dramatic views of the Caroux that dominates the skyline of St. Chinian.  Jean gave me a detailed explanation of the geology, how two geological plates met and pushed up lower strata of rock, but we were on a bumpy track making any detailed note-taking well-nigh impossible! He took us to various viewpoints; the soil is red and very stony with clay, and he also has some schist, and some sandstone, and there are a lot of underground water sources.  He explained how his parents bought the estate some 45 years ago and that he took over full responsibility in 1993, although he had already started working on the estate in 1982, after qualifying as an oenologist in 1980.  And then it was back to his welcoming little tasting room. 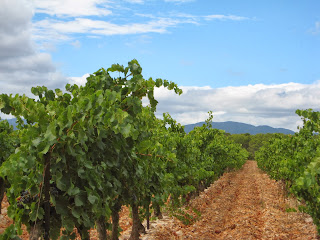 2012 St. Chinian Blanc - 5.00€
Two thirds Roussanne to one third Grenache Blanc.  In vat and bottled early, in December.  Light colour. Almondy nose. Quite firm acidity on the palate. Roussanne gives a touch of apricots, and also cloves, Jean suggested, while the Grenache blanc provides some fleurs blanches. Quite rounded, with dry honey on the finish.

2012 St. Chinian rosé– 5.00€
Jean said that he had given this wine ‘a new look’ in that it is lighter in colour than usual and he no longer includes any Syrah.  And there used to be 50% Grenache Noir, but has been reduced to 25%, with 25% Mourvèdre and 50% Cinsaut.  The Cinsaut and Mourvèdre are saigné and the Grenache pressed.  A rounded, ripe nose and on the palate quite mouth filling with raspberry fruit and fresh acidity.   Nicely balanced.   Jean has also planted some Piquepoul Noir, which is allowed in the appellation of Coteaux du Languedoc.  He will have vinified it for the first time in 2013, as an experiment for the rosé.

2010 St. Chinian, Cuvée Magali – 5.00€
After his daughter, as a 20th birthday present.  What a great birthday present, to have a wine named after you!  I was quite jealous!  Syrah dominates, with some Grenache and Cinsaut.
Quite a deep young colour.  Quite a ripe nose, red fruit, and cherries and warming.  The palate is quite ripe and soft, and very supple, with some spice.  I would have preferred a little more grip, and a little less alcohol, but it makes for easy undemanding drinking.

2008 St. Chinian, Cuvée des Chevaliers – 7.00
The cuvée has been produced since 1980. Again Syrah, with Grenache and Cinsaut, but from older vines, now at least 30 years old.  Quite a deep colour.  Quite rich with concentrated black fruit on the nose.  Much more than for Cuvée Magali.  And a rounded palate with ripe black fruit.  Rich and supple and quite mature.  Élevage only in vat.  Jean has given up on barriques; he feels quite strongly they don’t achieve anything, but just add a bit of ‘make up’ to the wine.  He made his last oaked wine, Réserve du Commandant, in 2007, and has now dropped that cuvée.

2010 St. Chinian les Truffières – 13.00€
From the highest vineyards, at 205 metres, near some truffle oaks.  On very stony clay and limestone soil.  77% Syrah to 23% Grenache.  Élevage in vat.  Rounded ripe spice.  Youthful fruit; black fruit and spice on the palate and a hint of liquorice, with good depth.

2010 Syrah, les Truffières, Vin de France – 15.00€
These vines were planted in 1990 and the wine has spent at least 18 month in vat.  Good colour.  Quite a firm closed nose.  Firm young palate, but with some rich fruit to develop.  Good concentration.  Quite rich and mouth filling.  Develops in the glass, some leathery notes, liquorice. And black fruit.   The first vintage of this wine was 2005; Jean wanted to see how Syrah would perform on its own.

2008 Les Curées Expression Syrah.  Pays de l’Herault. – 14.00€
The name of the hill, and nothing at all to do with priests.  6 – 10 months of élevage.  Deep colour; quite rich and leathery on the nose.  Quite ripe, with a certain confit note.  I didn’t find it very Syrah; it seemed more Grenache in character, richer and exuberant, and pretty alcoholic at 15˚.  The difference between this and the previous wine lies in the soil; the vines are on different hillsides.

2008 les Curées, Expression Grenache, Pays de l’Herault – 14.00€
The same vinification as for the Syrah, with délèstages and racking and one month on the skins.   Quite a solid dense nose.  Quite perfumed and ripe on the palate, with fresher acidity on the finish. The Grenache was showing better than the Syrah, but apparently a few days ago it was the other way round.

2008 les Curées, St. Chinian – 17.00€
Half Syrah and half Grenache, so basically a blend of the two previous wines.  Medium colour.  Quite closed with concentrated black fruit on the nose.  Rounded, ripe and dense with a tannin streak and quite a sweet finish.  The wine evolved in the glass, becoming more spicy, as we chatted, acquiring more depth. 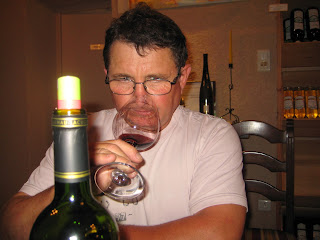 And then Jean asked if we would like to try something a bit more mature.   I never say no to that question, so he produced a bottle of 1996 Cuvée des Chevaliers.  He called 1996 a ‘millésime de circonstances’.  There was a storm on 28th January, with heavy rain and hail.  Nearby Puisserguier was under water.  The hail crushed the tiny young buds, which were just forming, with the result that the harvest was 40% of a normal crop.  But the grapes were very good.  Medium colour.  Leathery dry spice.  Quite rounded and quite intriguing on the palate.  Rounded with some leathery notes, wax and balsamic.  There would have been a lot of Carignan in the blend, as well as some Syrah and Grenache.

Jean talked about how his wine making has evolved, and also how the work in the vineyards has changed.  Initially all the vines were gobelet bush vines; but he realised that trellised vines allows for better air circulation.  You also need to consider the ratio of leaves, the surface foliaire, to grapes.  In 1985 he started destemming the grapes, and in 2001 realised that tasting the berries was a much better way to determine ripeness, rather than relying on an analysis.

2001 St. Chinian, Cuvée des Chevaliers
2001 was a very good vintage, his best vintage ever, with a dry summer giving good concentration, after a wet spring, so no water stress made for balanced wine.
Good colour; rich smoky and concentrated with a tannic streak.  Quite ripe and powerful on the palate, with some mineral notes.  Rich an elegant.  A leathery tannic note, with some black fruit.  Some herbs from the garrigues.  Elegant but concentrated, but not heavy.

And then a sweet note on which to finish:
2010 Grains d’Automne, Chenin blanc, Vin de France – 9.50€
Light golden colour.  Honeyed acidity on the palate.  Jan explained that you need to expose the grapes to oxygen so that the tannins don’t oxidise in the bottle.  There is a lovely freshness in the wine, with concentrated fruit and balancing acidity.  The grapes are picked about two to three weeks later than the other white grapes, but often before those for les Curées.

And then Jean opened the 2008 Grains d’Automne.  It was fascinating to compare the two. This had a deeper colour and was much richer and more honeyed, with more concentration, but again with very good balancing acidity.  It had not been in wood.  The two wines were made in the same way, and had the same alcohol level and residual sugar, 60 gms /l, but the 2008 had more acidity.  Jean observed that the higher acidity reinforces the sugar, making the wine seem sweeter.  And the flavours opened up in the glass, with quince and honey.  It was a grand finale to a lovely tasting.    Cher parrain, un grand merci! 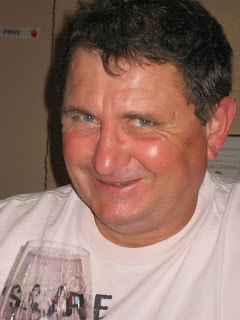