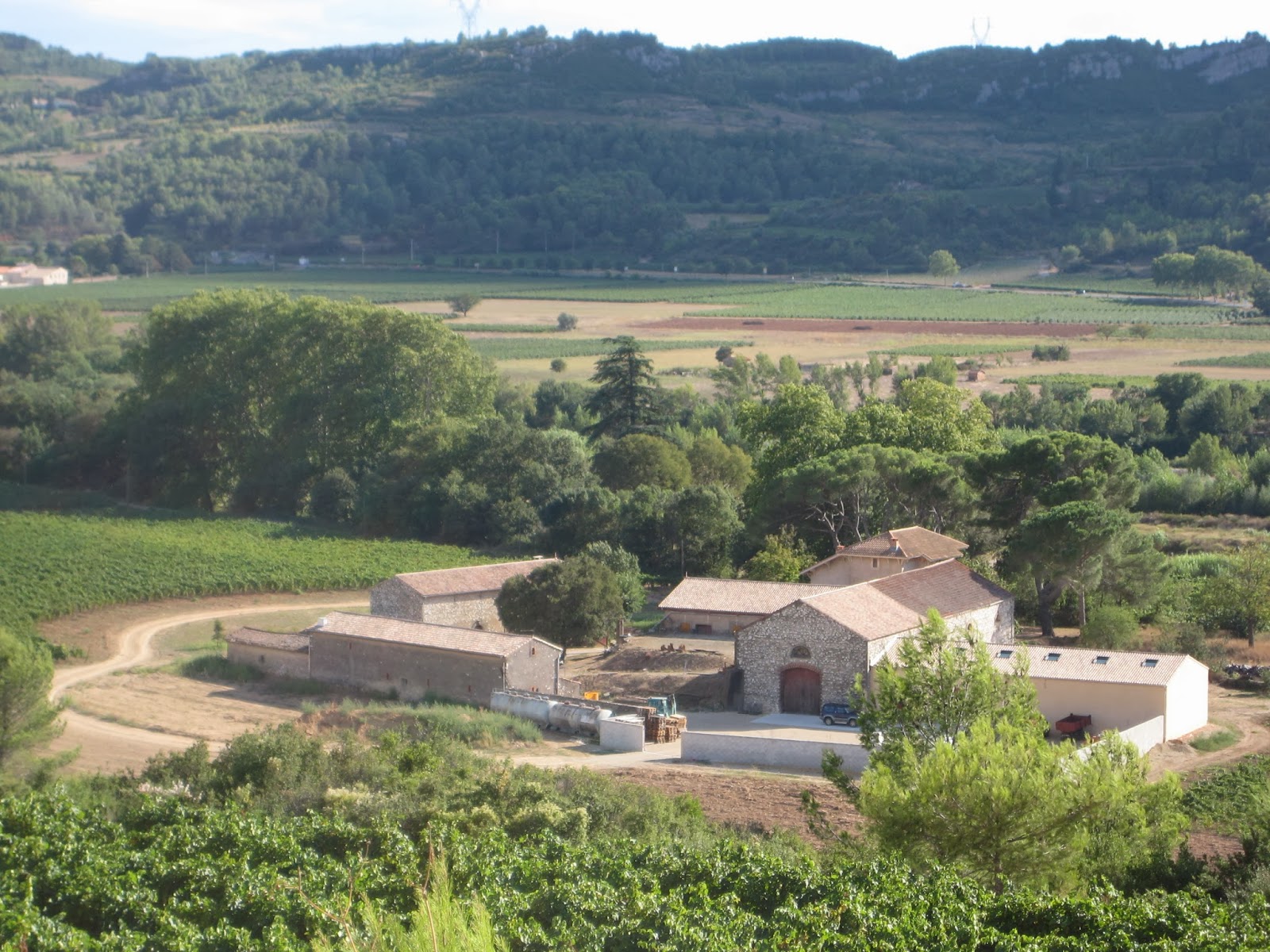 Again it had been a while since I had visited Château Viranel, so it was high time to remedy that.  You take a road outside Cessenon and follow the Orb river.  Nicolas Bergasse showed us round.  Viranel has been in his family since 1551. He works with his brother Arnaud, who does sales, while Nicolas is the winemaker. They have an enormous cellar, with concrete vats, of different sizes, as well as some stainless vats for storage, and some barrels.    There are two buildings that date from 1887 and 1870, at a time when  they concentrated on a produit de masse, and needed grosses marmites, the enormous indestructible concrete vats.  And the house dates from 1900. 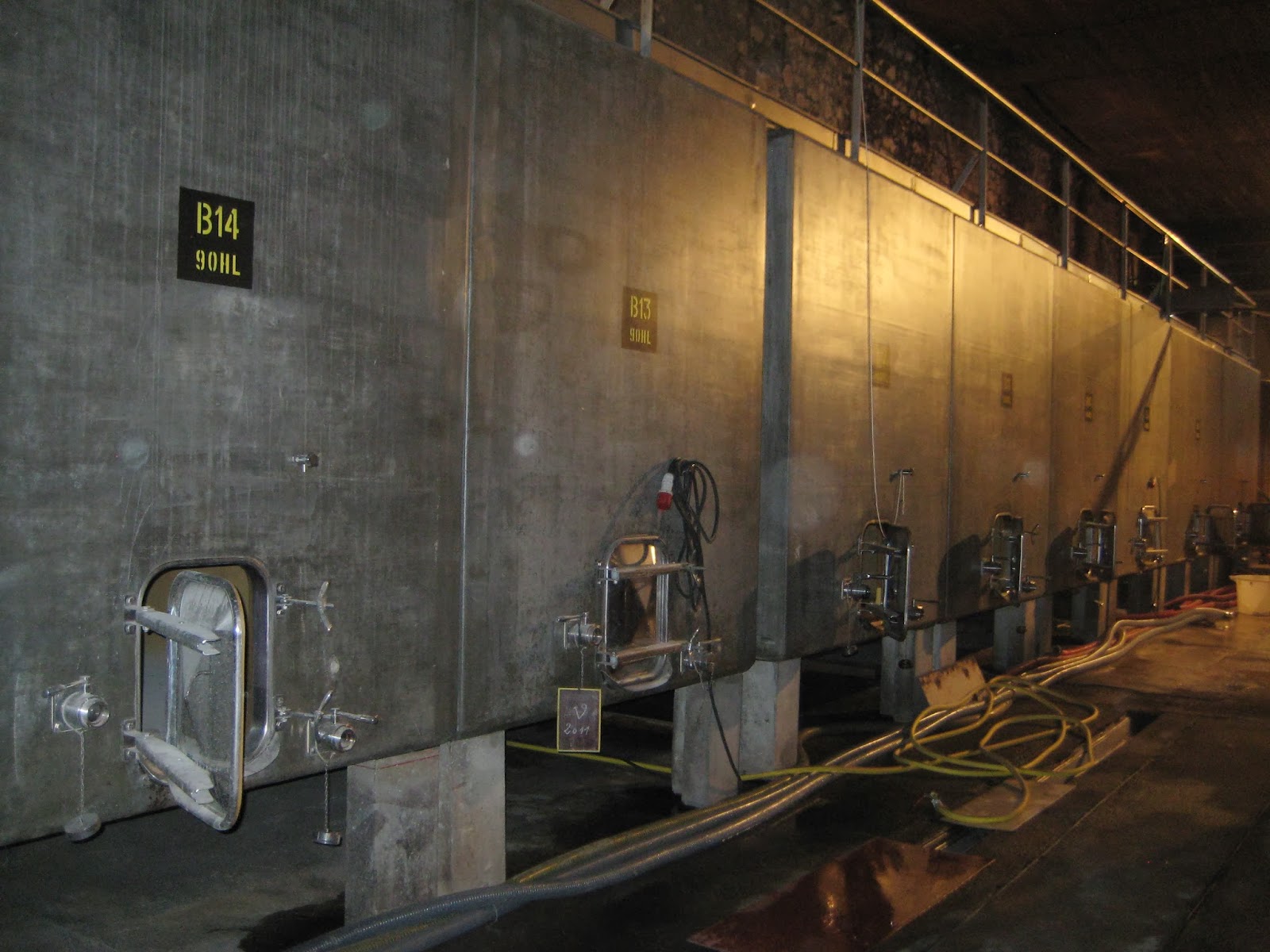 Nicolas talked about their vinification methods.  They favour délèstages, especially at the beginning of the fermentation, to extract fruit, as well as a few remontages and a bit of pigeage.  They submerge the cap and leave it to infuse for at least a couple of weeks, and possibly as long as six weeks, depending on the cuvée.
Then we went for a drive through the vineyards.  They have 32 hectares in production with a further 8 hectares planted.  The estate totals 60 hectares altogether. 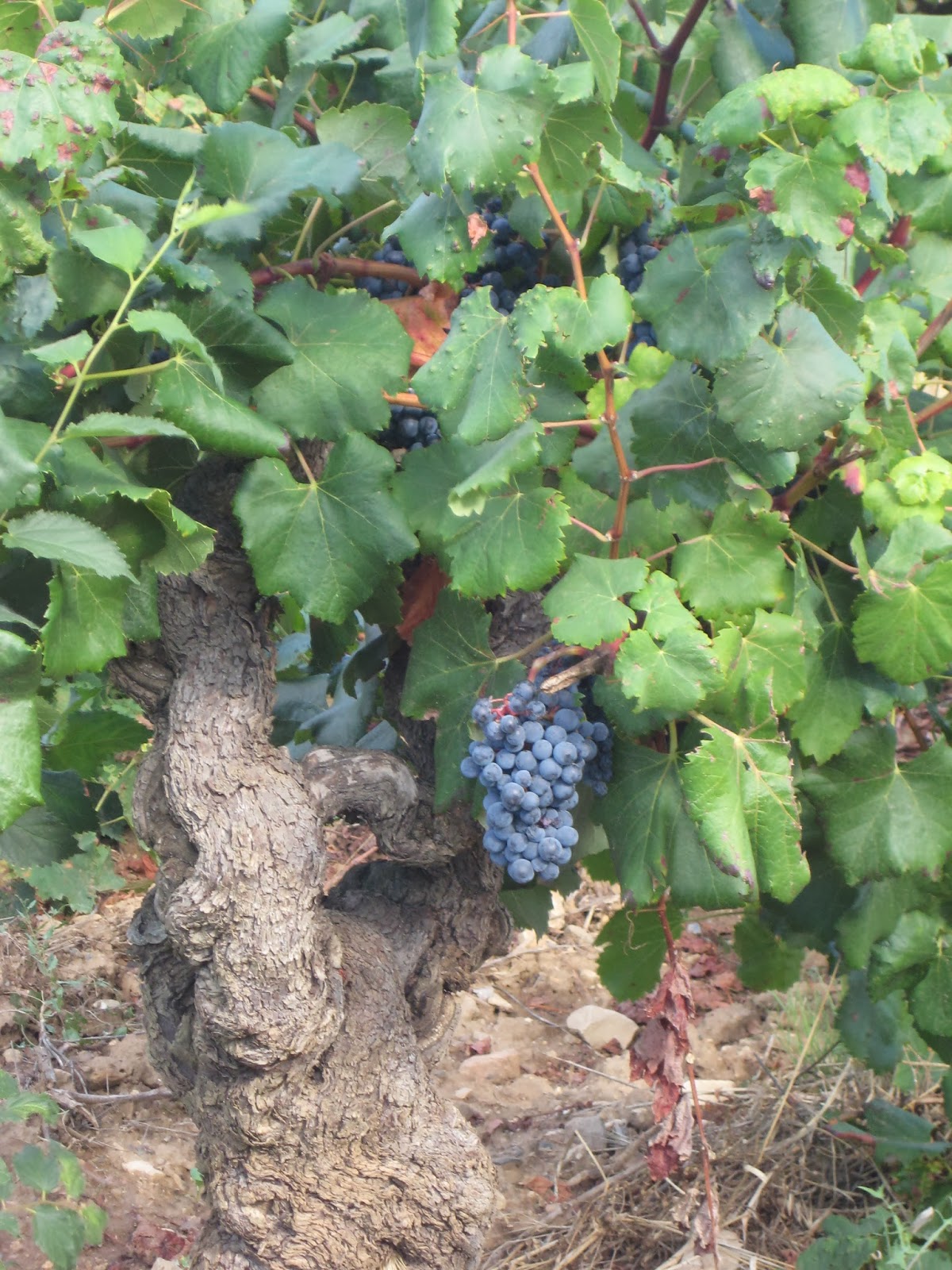 The most original grape variety is the old Alicante Bouschet, just 2.40 hectares of it, that was planted in 1939 by Nicolas’ great great grandfather.  And Nicolas planted some more, just three years ago.  He has some land that is too flat for appellation St. Chinian and so produces vins de pays.  This gives him two ranges, the appellation wines come from the hillside sites, and the vin de pays from alluvial vineyards near the river.  He reminded me that Alicante Bouschet is a cross of Petit Bouschet and Grenache Noir that was developed by Henri Bouschet in 1855.   It is a teinturier variety so that the juice is coloured a deep red.  And that is why it was planted in the first place, to add extra colour to more anaemic looking wines.  As for flavour it is quite rustic, with quite firm tannins and high acidity.  If Grenache has 2.5 gm/l acid, Alicante has 5/6 gms/l.  It has thin skins which make it susceptible to rot, and also rather astringent stalks. 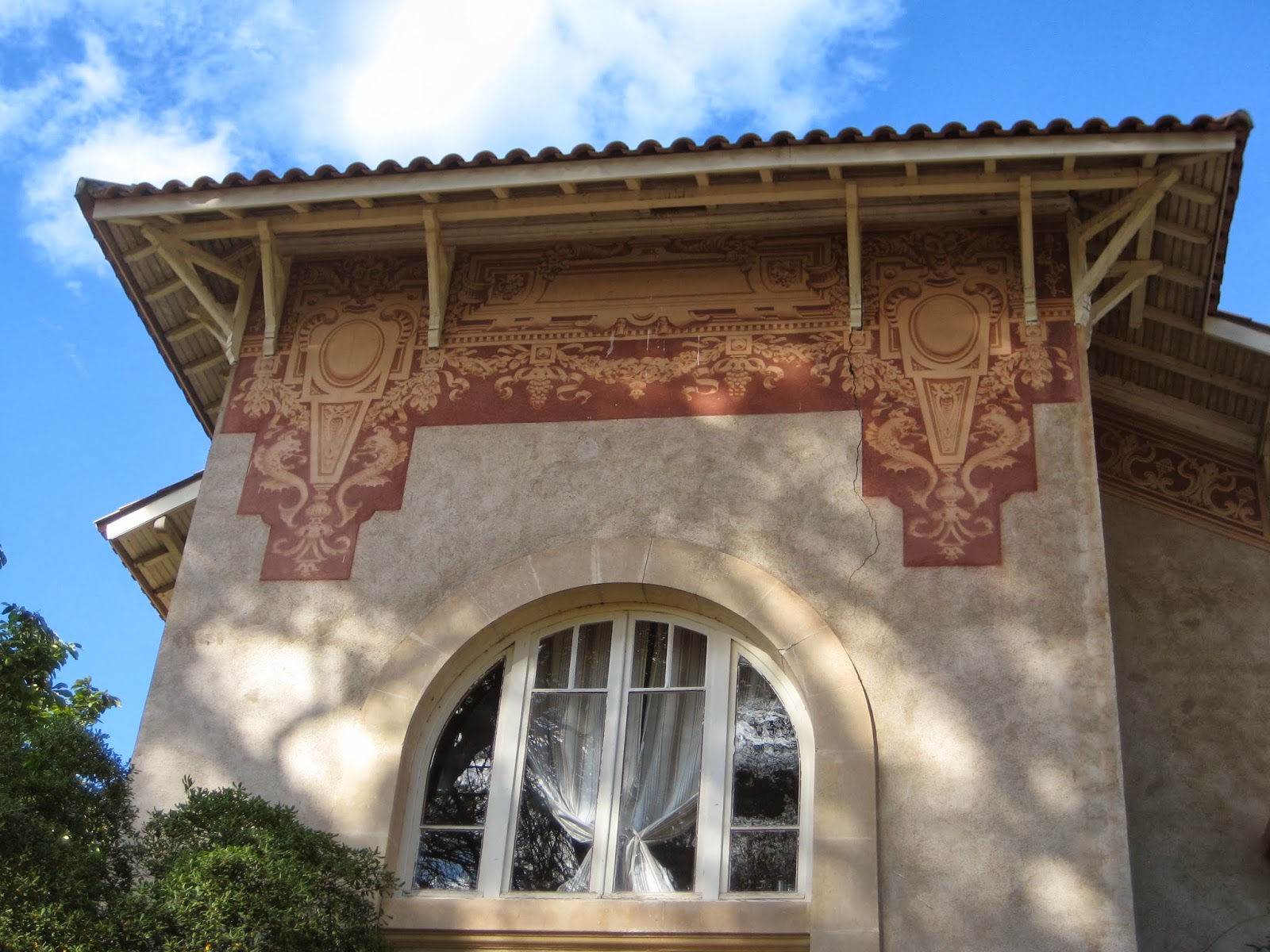 In the vineyard they practice lutte raisonée, and use no chemical weed killer, and their own compost from the marc.  Nicolas took us to a viewpoint, with a cross, where you could see over the vineyards.   There are the remains of a gallo-roman villa, and they have found amphora.  150 people once lived there, and a Roman road goes close by. 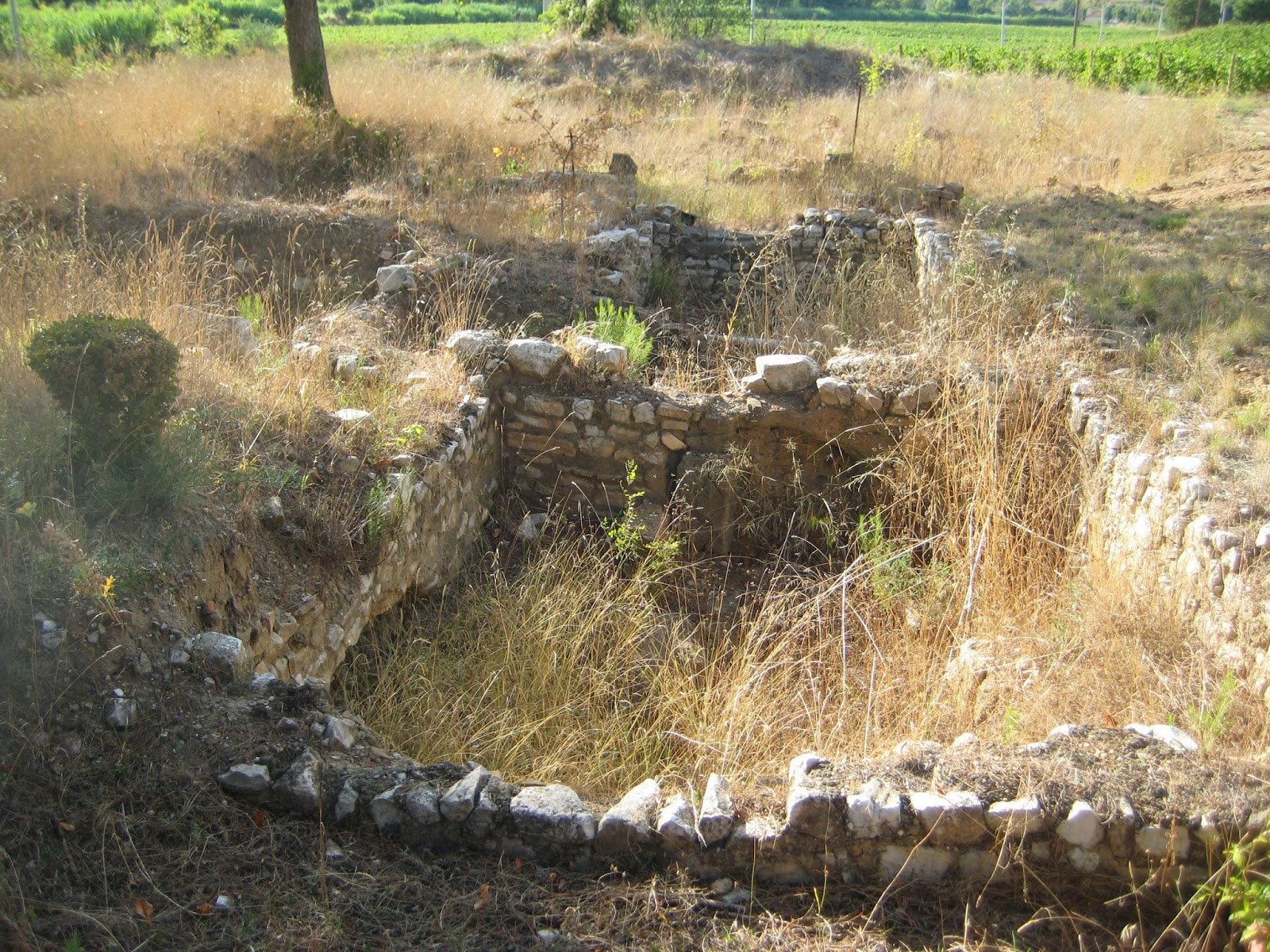 And then it was back to taste in the kitchen 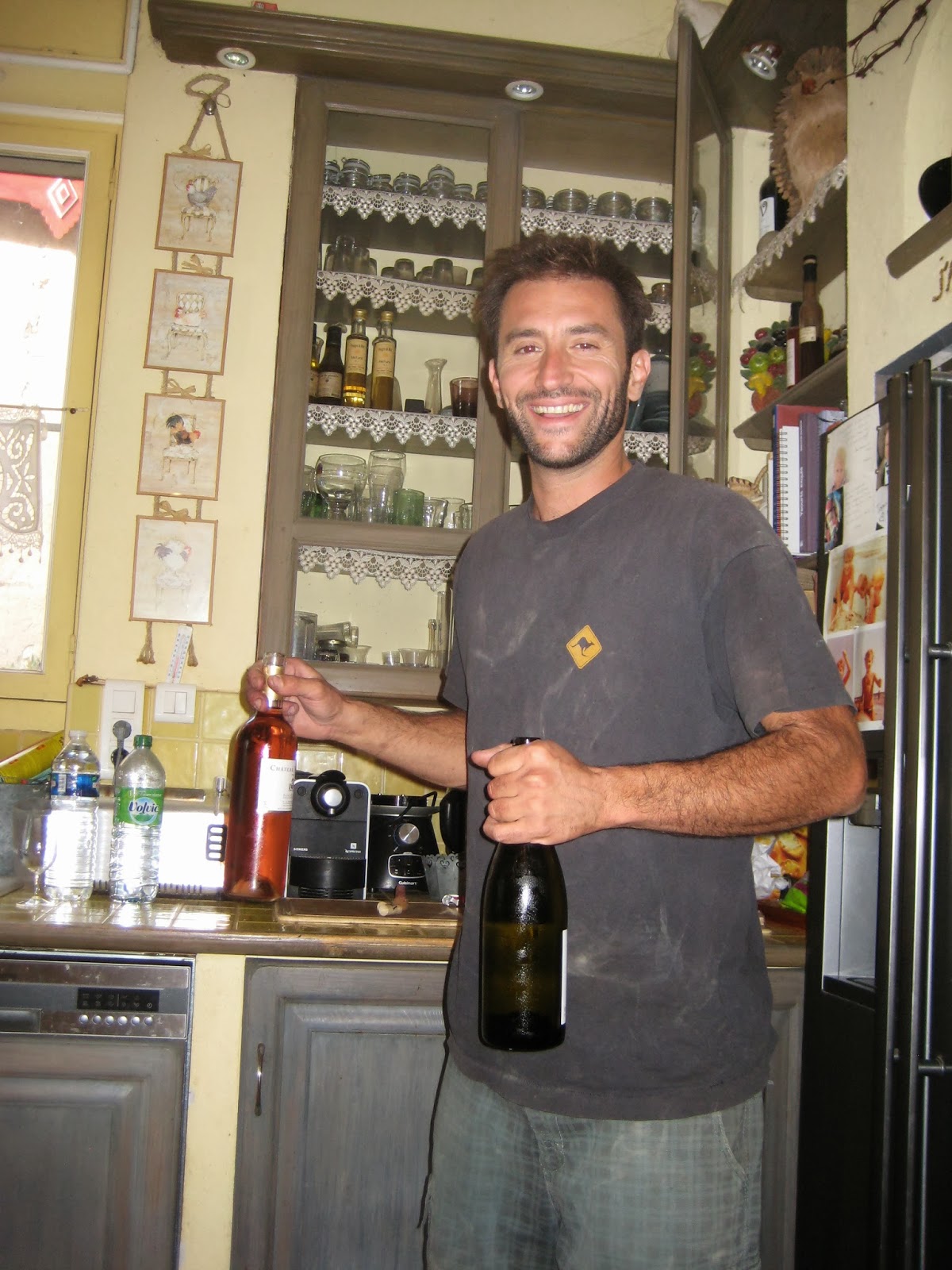 2012 Languedoc Blanc -7.00€
They don’t have the right grapes for St Chinian. Grenache Blanc dominant, 75%, with some Roussanne and Bourboulenc.  The Vermentino is not yet in production.  A classic vinification without any wood.  Light and fresh with herbal notes on the palate, and slightly bitter on the finish, but none the worse for that.  The Grenache is grown on clay and limestone, and also sandstone, which adds complexity.

2012 Viognier, Pays de Cessenon – 8.30€
Light coloured. A delicate nose.   Dry and peachy with slightly bitter fruit.  It lacked a bit of oomph, for a Viognier.

2012 St. Chinian rosé – 7.00€
Syrah and Grenache, saigné and Cinsaut pressed.  Pale orange pink.  Light fruit on the nose, and on the palate rounded with some weight and ripe fruit. A food rosé.

2012 Trilogie, Pays de l’Hérault - 6.30€
One third each of Alicante, Syrah and Cabernet Franc. Medium young colour, with a slightly rustic note on the nose, as well as some red fruit.  And on the palate there was plenty of red fruit, with a tannic streak and a rustic note, and a fruity finish.  Nicolas called it un vin de pétanque!  Something not too serious to quaff while you are playing a game of boules.  He explained that it is given a short maceration so that the fruit does not dry out. 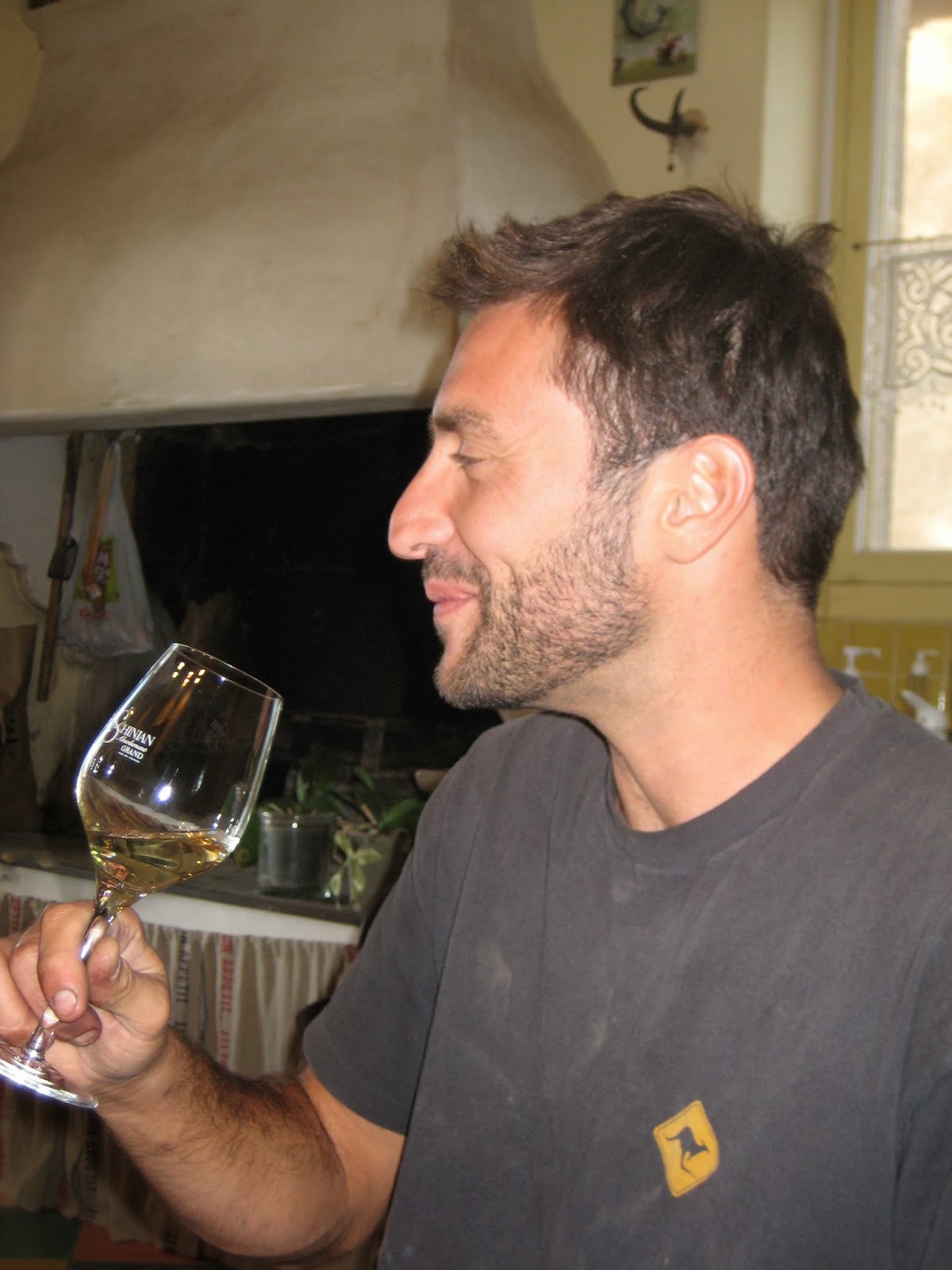 2011 Arômes Sauvages, Pays de Cessenon – 8.70€
This was pure Alicante Bouschet.  Medium colour.  Some rustic fruit on the nose, and on the palate  quite rustic with firm tannins.  The grapes come from the same plot as for the previous wine, but they are given  a longer extraction of about 20 days.

2012 – the same wine as a vat sample.  Good colour, with quite a firm nose, and quite dense ripe fruit. Youthful fresh red fruit, with a certain charm.

2010 St. Chinian Tradition – 7.70€
40% Grenache, 40% Syrah and 10% Mourvèdre and 10% Carignan.  A little élevage in barrel, 400 litre barrels and certainly not new.  And only for 15-20% of the cuvée.  The Syrah and Mourvèdre go into wood, but not the Grenache, and everything is blended after about 18 months, and bottled about six months later.  Deep colour.  Black fruit on the nose, and on the palate spicy black fruit, with a balancing streak of tannin.

2010 St. Chinian V de Viranel – 11.70€
Deep colour.  Quite firm structured nose, and on the palate, finely crafted with good tannins and elegant fruit.  They make just 3000 bottles of this, as opposed to 30,000 bottles of Tradition.

Nicolas then talked figures.  They still do a little vrac, sales by the litre.  The going rate is 1.10€ - 1.20€ for a litre of St. Chinian and 70cts for vin de pays.  And the average cost of producing a litre of bulk wine, so without any habillage, bottle, capsule or label, is 1.50€.  The economics are far from satisfactory.

And we finished with Gourmandise, vin de liqueur mistelle, Cartagène  - 12.70€ for 50cls.
Nicolas explained that it is made in a kind of solera that was begun in 1987. They produce about 1 – 2 hectolitres per year, consisting  two thirds of saigné juice and one third alcohol.  And each year they bottle 500 bottles, which represent one tenth of the solera.  It is a vin de liqueur from the must of fresh grapes and eau de vie du Languedoc.  Two thirds of the alcohol has been aged for two or three years, and the other third is new, white alcohol.   The fruit of the grapes and the alcohol must blend; they are mixed together and then put into old barrels.  And the result was quite delicious.  Good colour.  The nose was redolent of liqueur cherries, with spices, cinnamon and it was wonderfully soothing on the palate.  You could describe it as alcoholic cough medicine!   I really felt that it was doing me good.  The alcohol is very well integrated, the effect of the solera.  And we sipped it with some figs that had been cooked  in the same cartagène.  It was a marriage made in heaven. 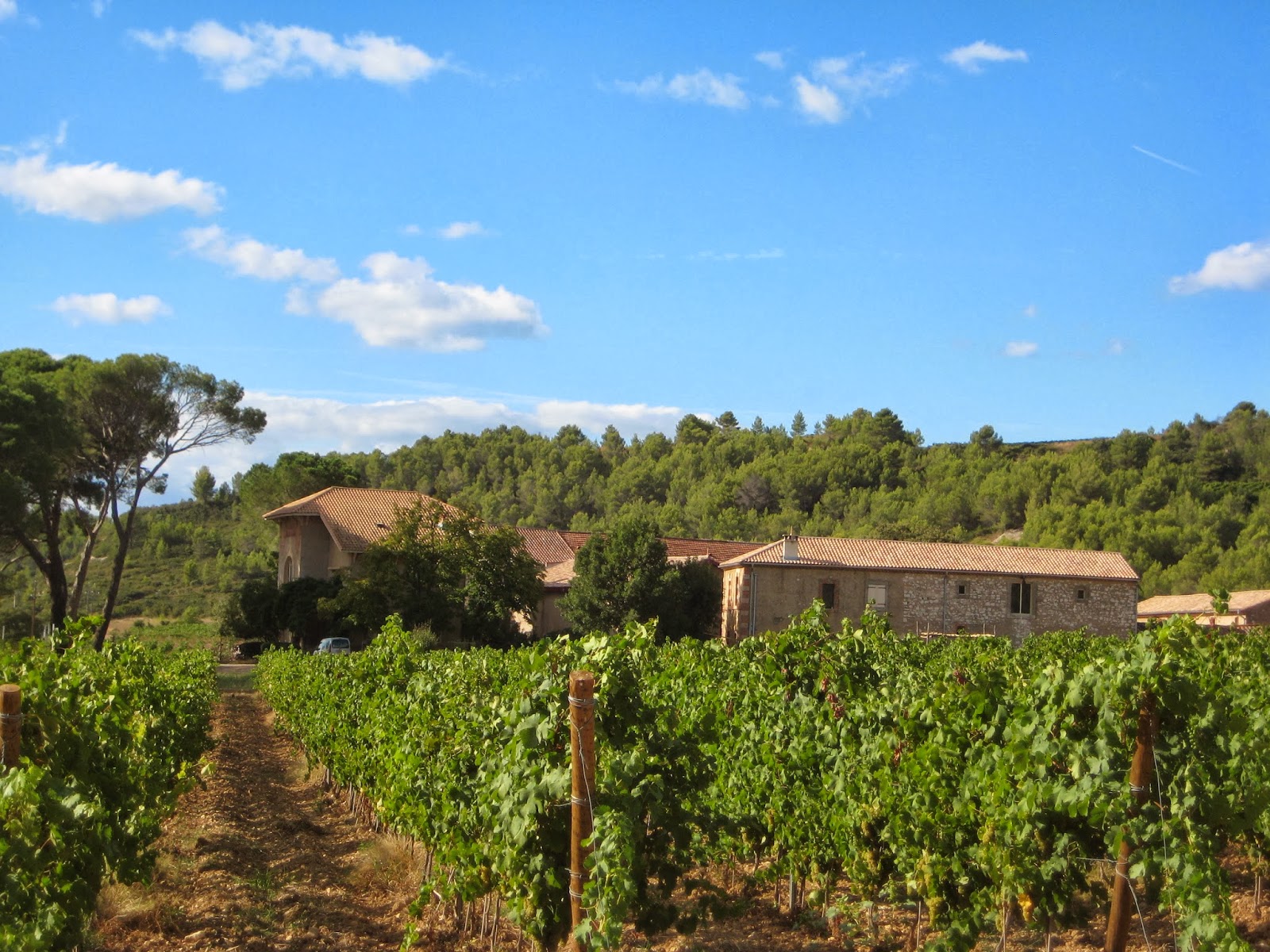