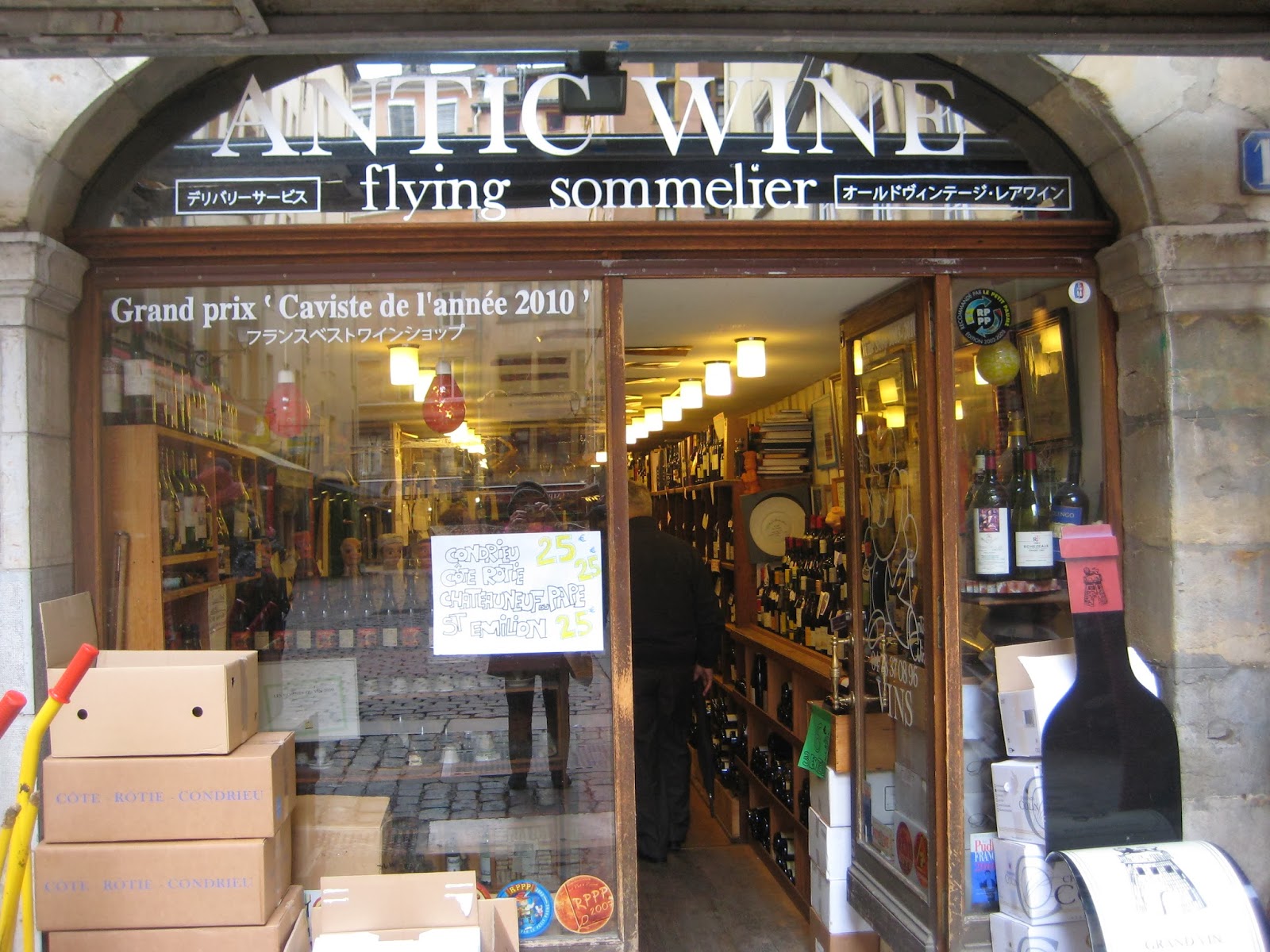 A deviation to the Languedoc via Lyon.  It was the weekend of the annual wine fair in Ampuis, a great show case for Côte Rôtie and other nearby appellations, with some 60 wine growers showing their most recent vintages.  And Lyon is a great city for eating, known above all for its bouchons, the typical restaurants, offering classic lyonnaise cuisine, quenelles and andouillettes and other copious dishes.  I can highly recommend Le Garet.  But as in most bouchons the wine list is pretty limited, with a choice of a couple of Beaujolais and a Côte du Rhône or two. 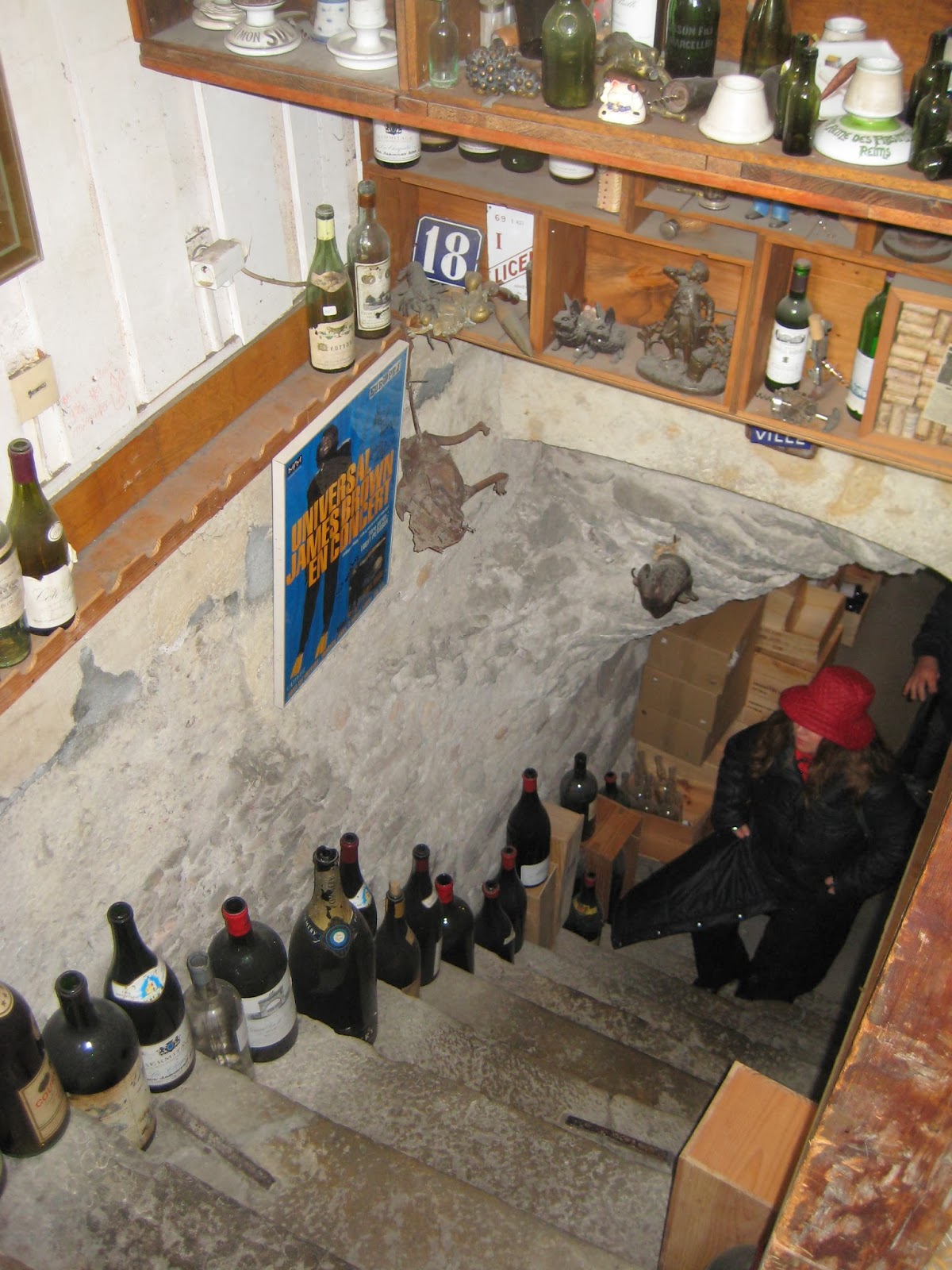 However, Lyon boasts one of the best wine shops in France,  Antic Wine in the old town.  It is a glorious Aladdin’s treasure trove of a shop, a long thin shop packed with bottles and cases.   You can trip down some precarious stone steps to an arched cellar, and squeeze your way past wooden boxes of claret and Romanée Conti.   There are bins of bottles, and lining the wall a row of empties, delicious names that display George dos Santos enthusiasm.  I spotted Haut Brion, Clos Ste Hune, Gaja to name but three. 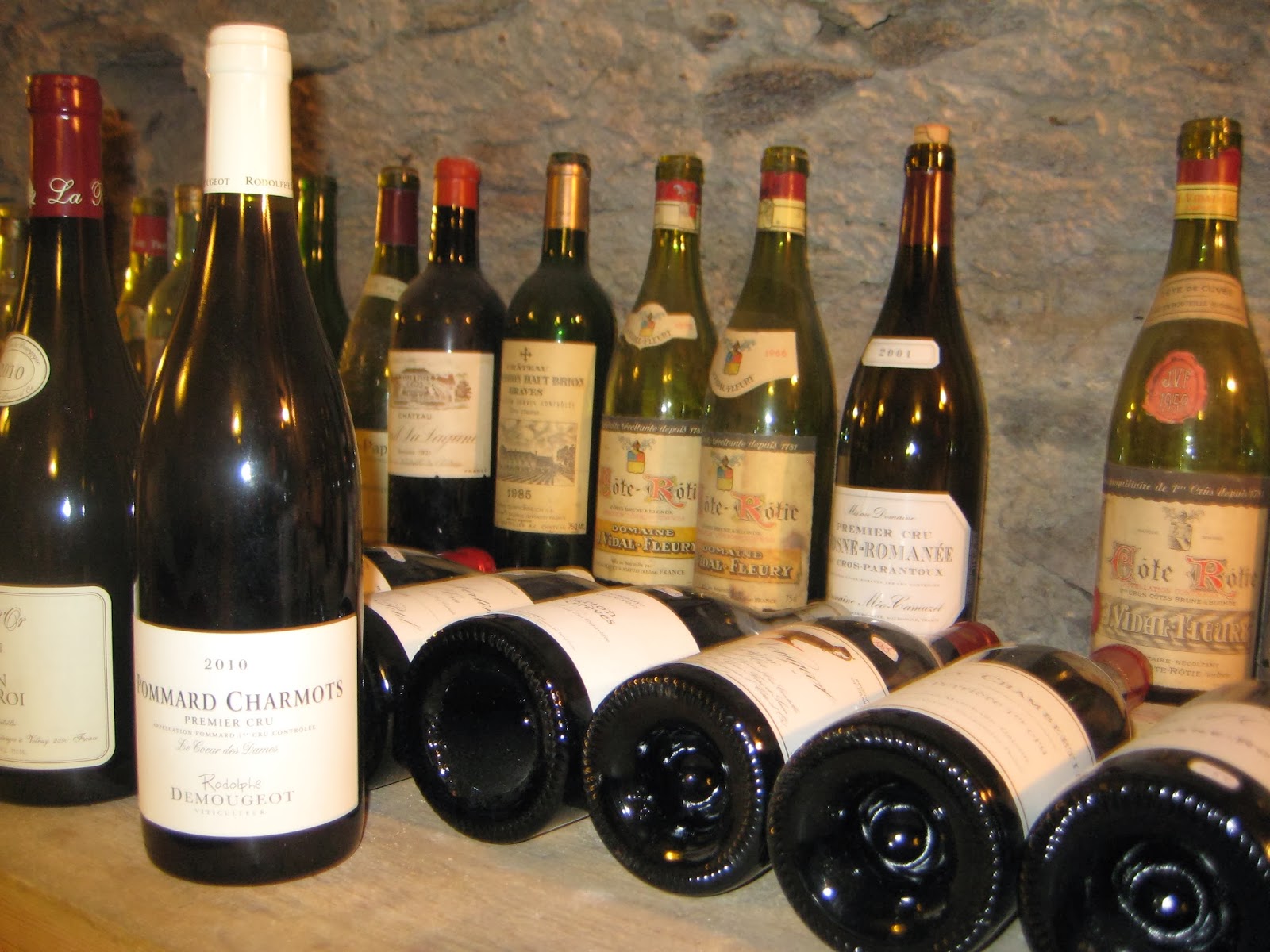 Georges has had a varied career, including a spell in London.  He is passionate and opinionated, and absolutely committed to the cause of fine wine.   There's no wine list - though we happened to time our visit with the annual stock taking.  I asked about the Languedoc  - Grange des Pères was the first name Georges mentioned.  I spotted magnums of Mas de Daumas Gassac, la Peira from the Terrasses du Larzac, Mas Bruguière from the Pic St Loup and other tempting goodies and ended up buying a bottle of Jean-Michel Alquier's Sauvignon for friends for dinner. 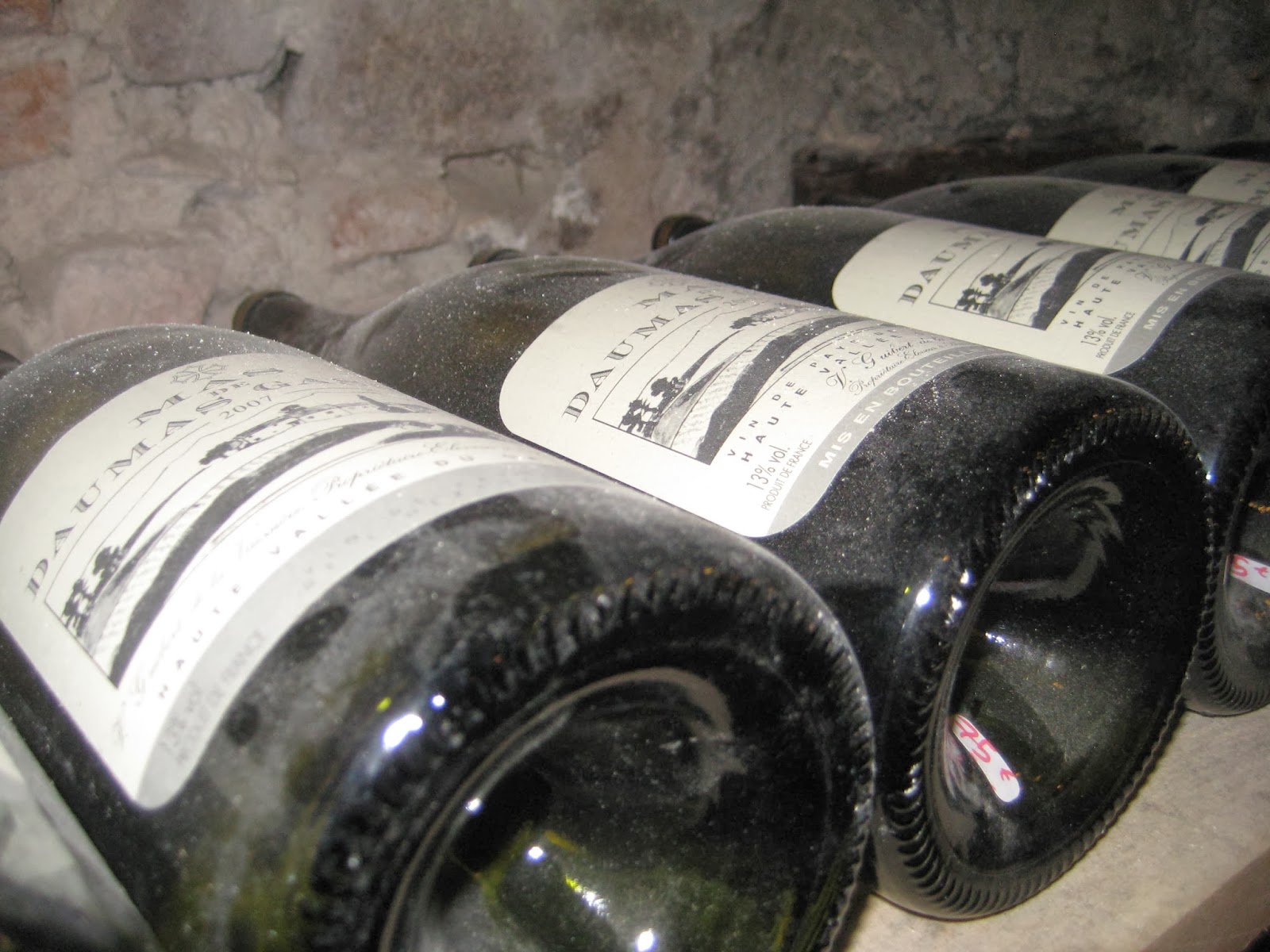 And we were in luck, Georges had some open bottles, and despite the stock-taking was prepared to chat and taste.    There were a couple of vintages of Clos Signadore's Patrimonio, the 2012 with fresh red fruit, and a more leathery and evolved 2007. Alain Graillot's Crozes Hermitage was firm and peppery.  A mystery bottle turned out to be a table wine from the Douro with rich red fruit, and even more of a mystery was a bottle of Vosne Romanée from René Engel of uncertain vintage. And a name that was completely new to me was Michel Gallety from the Coteaux Vivarais, with rich dense fruit from old Grenache vines.    So if you are Lyon, do pop in.  You never know what you might discover in an Aladdin’s cave. 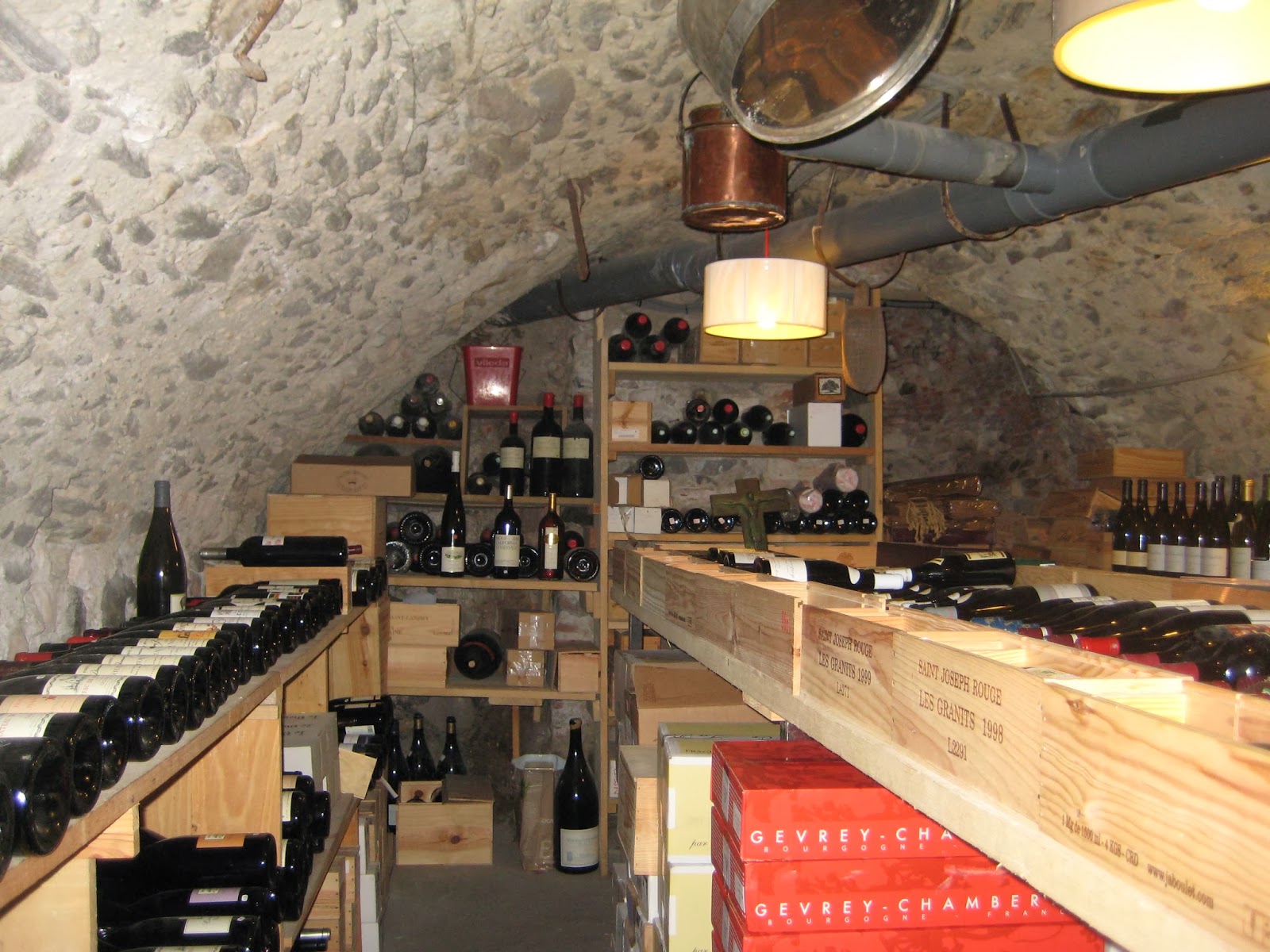