A day in the Pic St. Loup - Mas Bruguière 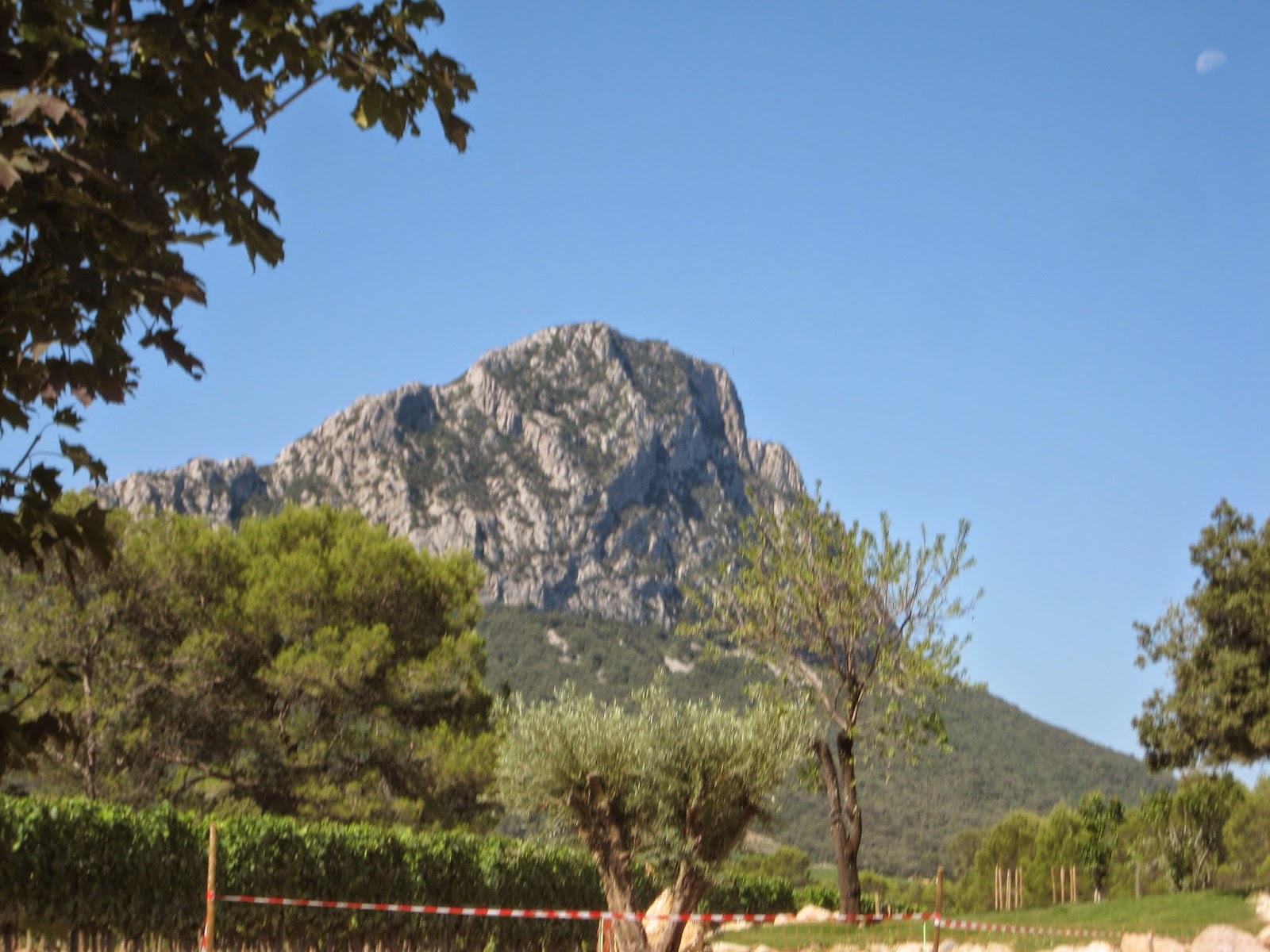 My new friend, Sharon Nagel, who has just published a wonderful book on the Pic St. Loup,  suggested coming to explore the area with her, and arranged a great day out.      If you don’t know the Pic St. Loup, the dramatic views of the Pic itself are alone is the worth the detour.  The scenery along the road from St. Martin de Londres to St. Mathieu de Treviers is simply breath-taking and on a July morning, there was a slight heat haze and Pic St. Loup and the Montagne de l’Hortus presented a dramatic silhouette, with the vineyards in between the two hills. 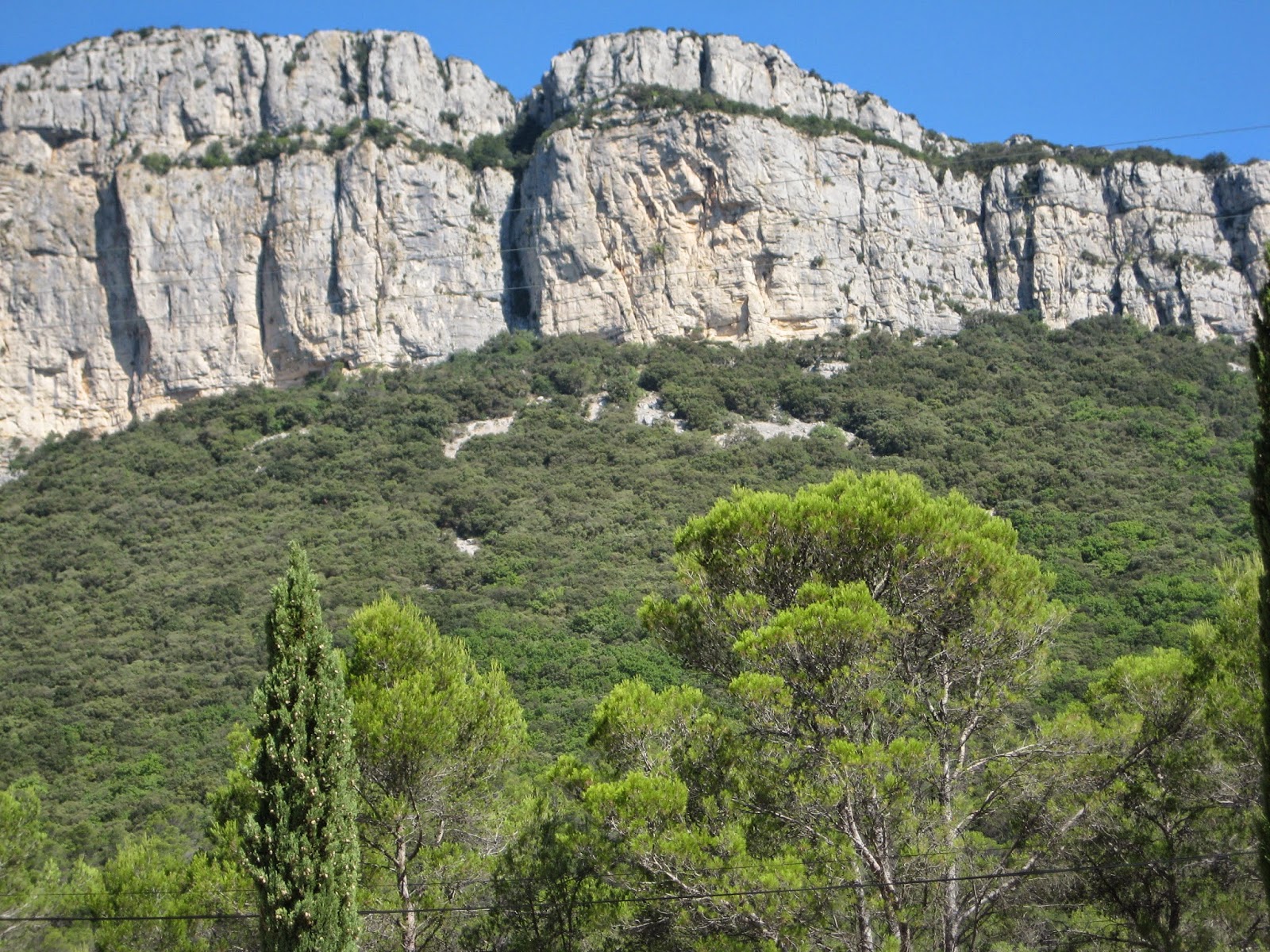 Xavier Bruguière is the seventh generation on the estate.  The family have been making wine here since  the Revolution.  They have 20 hectares altogether with the hub of the estate at the foot of the Pic, where their cellar is.  At the beginning of the 19th century this was an area of polyculture and the wine was sold to a broker, and then when the coop was created in 1920, a grandparent took the easy route.   Xavier’s father, Guilhem,  took over in 1974, and was a member of the coop of St. Mathieu,  but then in 1986 became one of the first independent producers to begin bottling his  wine.   He then bought a further ten hectares in the northern part of the appellation, which he has gradually replanted since 1999.  And that is when Xavier started working on the family estate.

For red wine they have Syrah, Grenache and Mourvèdre, but no Carignan, or Cinsaut, but they are planning to plant some Cinsaut next year.  and for white wine, which is Coteaux du Languedoc, not Pic St. Loup, they have Marsanne, Roussanne and Vermentino.   Xavier observed that if you plant Carignan these days, you are planting for your children.    He studied at Béziers and worked for a couple of years at La Liquière in Faugères under a system whereby you alternate studies with practical cellar and vineyard work.   And from 1999 he worked with his father, until Guilhem retired in 2004.

The relatively new cellar is well conceived.  Everything works by gravity, so that the grapes are filled from above.  Xavier uses natural yeast, and has cement fermentation vats for his red wine and large tronconique oak vats for élevage, as well as some 600 litre barrels.  Generally he favours large containers rather than barriques.  However, like most good winemakers he believes that 80% of the wine is made in the vineyard and he works organically. 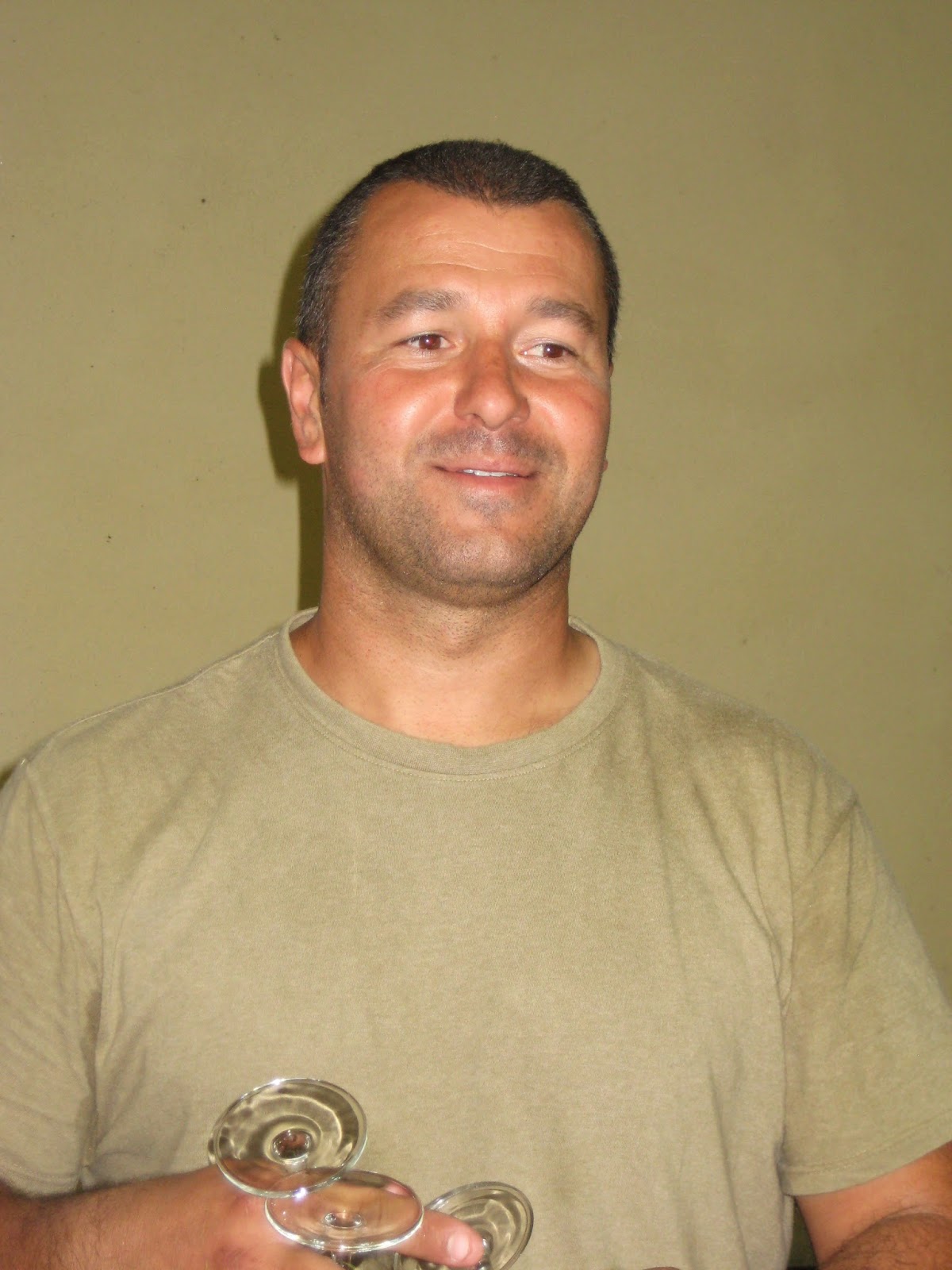 First we tasted some 2013 vat and barrel samples.  They promise deliciously well.
We kicked off with Grenache   Xavier said it came from old vines, but they were only 38 years old, the same age as him,  He explained that his grandfather had replanted his vineyards in 1958, after the big freeze of 1956, but for table grapes, not wine, so his father had started again.  These vines were on limestone just below the cliff of Hortus.  The Grenache was delicious; perfumed liqueur cherries with some acidity and tannin and minerality.  It stays in vat, as Xavier believes that  Grenache tires in wood.  And you certainly couldn’t  taste the 15˚

Next came some Syrah.  The first wine was from 14 year old vines on red clay and hard limestone at Lauret.  They ripen fifteen days later than the vines around the cellar.  The altitude is the same but the soil is cooler.   Élevage in  a tronconique vat.   There was peppery fruit, and the wine was nicely taut, firm, structured and elegant.

Another Syrah, from vines planted in 1982, by the cellar on white clay and soft limestone on cooler north facing slopes    Deep colour.  More closed on the nose and more structured with more tannin.  Fresh and closed and more powerful. Will need longer ageing.

2013 was the year of the late harvest.  Xavier described the spring as impitoyable, but the summer was very  good, with rain just when you needed it.   And the harvest went well.  They started picking fifteen days later than usual, but finished at the same time as 2012.  It took two weeks rather than four.    So far 2014 has been dry, until a few days ago.  But  there is some pressure from oidium, and they have had a touch of hail, but nothing as serious as in the Minervois or la Clape.

A third Syrah had a firm smoky nose and palate.  It came from a tronconique vat.  With good acidity and tannins and a certain freshness, making for an elegant red wine.  I needed to be reminded that 50% is the minimum percentage for Syrah in the Pic St. Loup.  We are talking about the coolest and wettest part of the Languedoc.

And the finale barrel sample was some Mourvèdre, grown just below l’Hortus.  Xavier described it as a un cépage ingrate – it is black or white.  They are at the northernmost limit for Mourvèdre.   You can’t plant it  just anywhere, and you need to work in the vineyard.  There was some rounded fruit, with firm but silky tannins, with elegance and length and the freshness of the hills.  It promises very well  for the  2013 Cuvée le 7me.  It will probably be bottled in the spring of 2015, depending on its evolution in barrel. 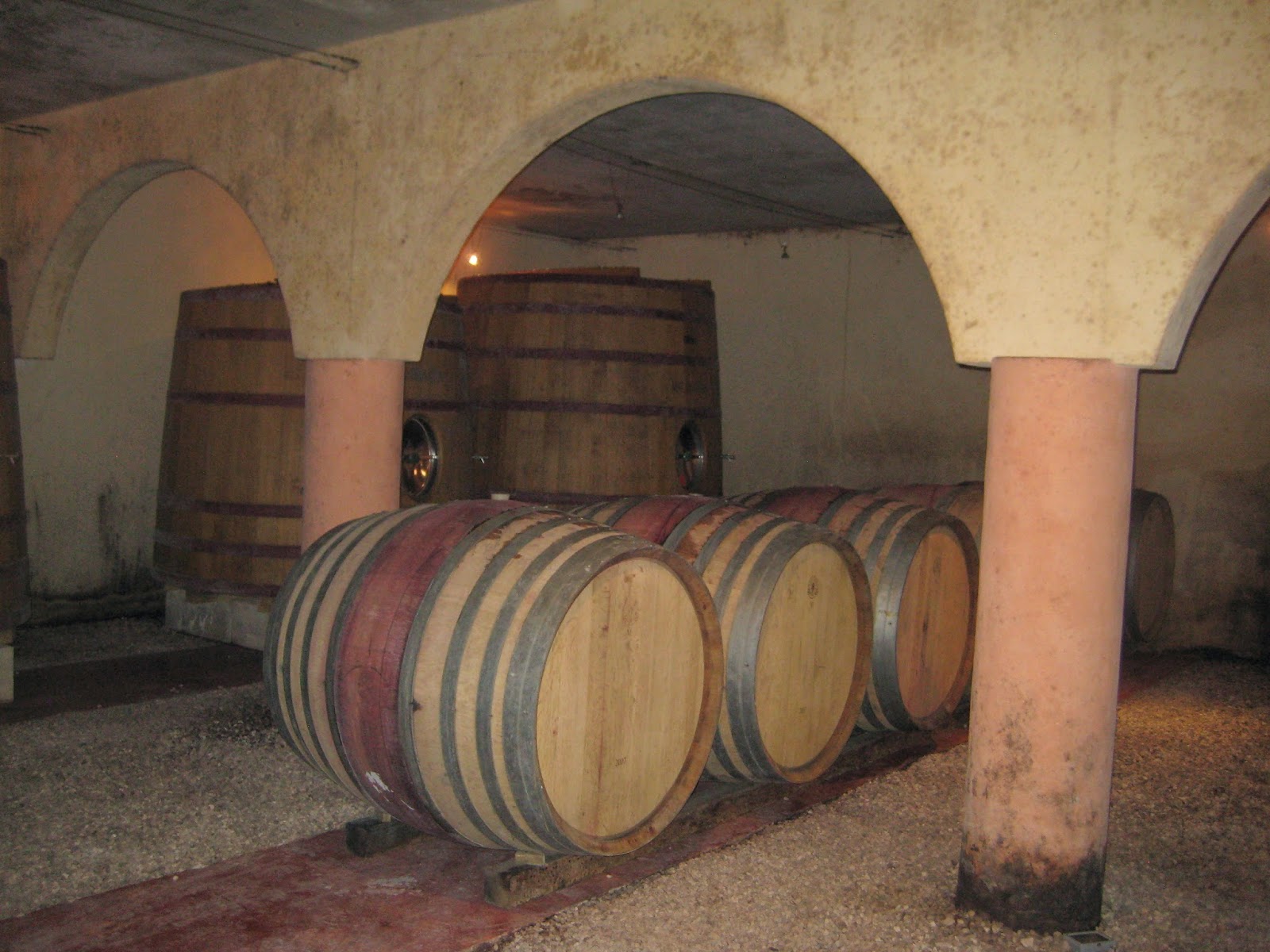 And then we adjourned to his tasting caveau for some bottles:

2013 Coteaux du Languedoc blanc  Les Muriers  – 12.00€
Guilhem Bruguière planted the white varieties in 1992 and the blend comprises 70% Roussanne, 20% Marsanne, and 10% Vermentino, which is a more recent addition to the blend, planted in 2008.  Xavier had wanted to broad the aromatic palate.  He observed that later ripening varieties do better, and 30% of the blend is vinified in small foudres of  12 hls.  He uses just the free run juice and very first pressings.  However you wouldn’t notice any wood impact at all.  The nose was redolent of white blossom and the palate rounded and herbal, with very good acidity and a fresh finish.   There are apparently moves towards a white Pic St. Loup; for the moment any white wines from the area are Val de Montferrand, after the nearby ruined castle, or indeed Pays d’Oc or Hérault, or plain Languedoc or Coteaux du Languedoc.

2013 Rosé Pic St. Loup, L’Arbouse – 8.50€
50% Syrah and 50% Mourvèdre.  10% saigné and all the rest pressurage direct.  Xavier keeps two hectares, especially for rosé, as it is a cooler vineyard site.  The colour is a delicate orange pink and the palate rounded with some weight.  It is ripe with balancing acidity, and very satisfying.

As we broached his red wines , the subject of the appellation came up.  How it that the Terrasses du Larzac are already is recognised as an appellation when they are much younger and with less visibility than the Pic St. Loup?   Pic St. Loup has been working on its dossier since 2001.   The answer lies with local politics.    There is a move to include vineyards from three communes that were not part of the original area of Pic St. Loup, namely Assas, Guzargues and Vailhauquès.    And that has provoked much friction.  The geology is similar, but the producers in those villages have not actually worked to create the appellation.  They would simply benefit from the new delimitation of the appellation, which has been carried out by the INAO.  Some long-standing producers of Pic St. Loup have actually had their vineyards reduced with the new delimitation.   As you can appreciate, it is a wonderful histoire de clochers.

2013 Calcadiz, Coteaux du Languedoc – 8.50€
Syrah and Grenache – 60%  aged in vat.  This is only sold at the cellar door, and makes a great red for summer drinking.  It is fresh and perfumed, with some acidity and tannin.  Fresh cherries was the main fruit flavour. 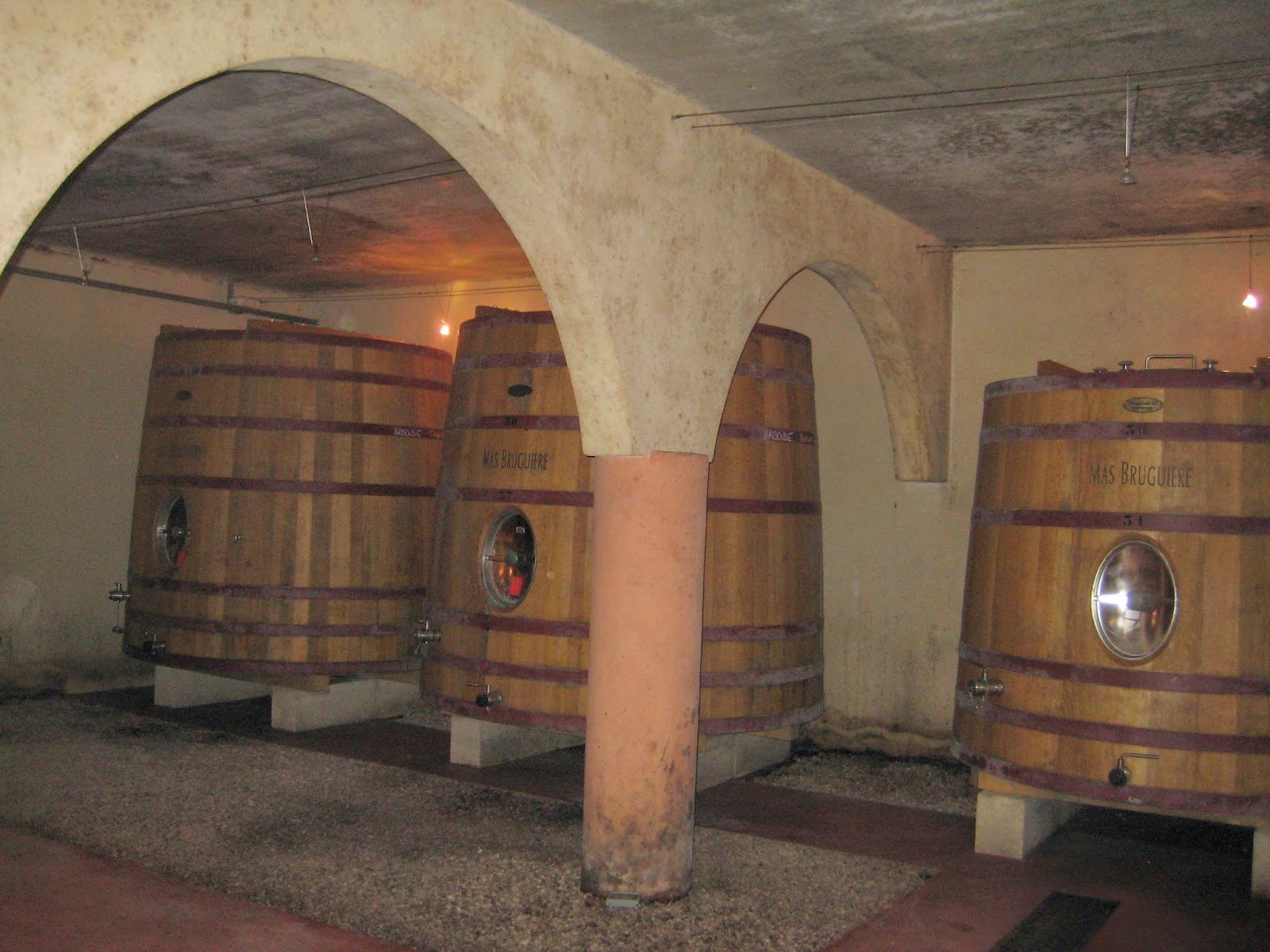 2012 l’Arbouse, Pic St. Loup.  12.00€
L’Arbouse is the fruit of the strawberry tree, or arbousier.    60% Syrah with some Grenache.  Part aged in cement vat and part in tronconique vats.   Medium colour.   Ripe spice on the nose and palate, and very perfumed red fruit, with the herbs of the garrigues, and a stony mineral nose, as well as a nice streak of tannin.  Elegant but easy drinking.  Asked his typicity, Xavier replied :  Fruit, Fraicheur et Finesse and you certainly found that in this first Pic St. Loup.

2011 La Grenadine – 19.00€
80% Syrah with a little Grenache and Mourvèdre.   Medium colour.  Firmer more structured nose.  Quite rounded and ripe with a touch of oak, which is nicely integrated.  Élevage in tronconique vats and demi-muids for 12 months, followed by six months in concrete vats.  Long and balanced.  Xavier observed that 2011, 2012 and 2013 were all three ‘beaux millésimes.

I observed that Faugères is generally much cheaper.   Apparently it all depends on the bulk price – 100€ per hl for Faugères and up to 180-200 € per hectolitre for Pic St. Loup.   The appellation covers 1500 hectares currently over 13, but soon to be 16 communes, from Corconne to St. Gely du Fesc.

And our tasting concluded with
2007 le 7me – 35€
Named for the seventh generation.  This is a pure Mourvèdre given  24 months  élevage.  Deep colour.  A rich nose and palate, with lots of depth and nuances.  Rich but elegant; both supple and subtle.  A supple tannic streak.  Xavier observed that 2009 was a hot vintage, but the freshness of the Pic St. Loup helped.  2003 was the very first vintage of 7me.  A great tribute to a long line of dedicated vignerons. 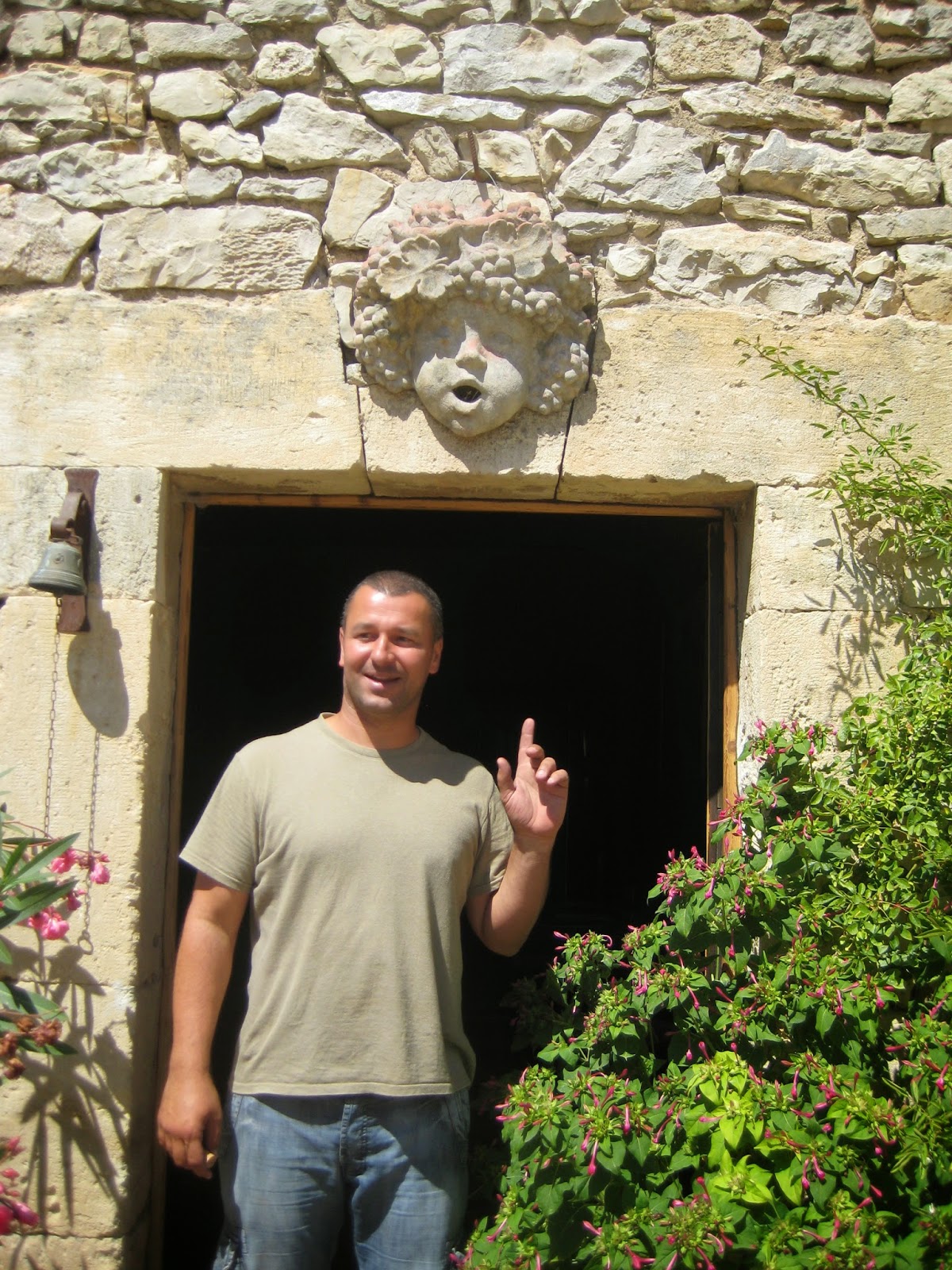 Alan March said…
One of my favourite Languedoc producers, L'Arbouse is my personal benchmark against which I rate wines. I visited the estate last year and will certainly be heading back again over the next year.
The politics are fascinating I'd love to hear more.
Can you point me in the direction of the book? Sounds interesting
10 August 2014 at 19:28

Rosemary George MW said…
For Sharon's book on the Pic St. Loup go to her website www.terroirs-dexception.com - link at the bottom of my post.
12 August 2014 at 16:32